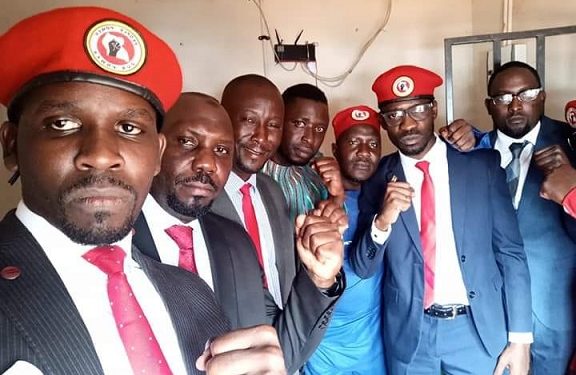 Heads of different Civil Society Organisations operating in Uganda have on Tuesday attacked government forces for muzzling and attacking the opposition, making it hard for them to carry out their political duties

While giving their new year massage at their headquarter at Muyenga Tank Hill Road, Kabalagala Muyenga, Henry Musinguzi the Executive Director (ED) of Alliance for Finance Monitoring said that they do know very well one of the hallmarks of democracy is Peoples’ Power and if the government takes away peoples’ power then Uganda cease to have had democracy anymore.

“Because democracy presupposes that people have the power and can exercise that through their ballot now if you are going to come out and muzzle dissent, free speech and try to disband gatherings that are enshrined in the rights of the people then that is going to be very treacherous,” he said adding that any sensible Ugandan must be concerned with what is happening.

Musinguzi’s statement follows Police and others forces’ brutal actions against Peoples’ Power’s leaders such as Robert Kyagulanyi, who was denied his consultation in a bid to contest for the Presidency in the 2021 general election on Monday.

On Tuesday, Police and  Uganda Peoples’ Defence Forces personnel, sealed off the People Power offices in Kamwokya while Kyagulanyi was conducting a press conference concerning what transpired on Monday.

Meanwhile, the ED Uganda National NGO forum Richard Ssewakiryanga said Uganda is full of a mixture of uncertainties that the present regime has failed and can never settle.

“There several mixtures of uncertainties and insecurity but also the hope which calls for us to undertake our national duty is lost,” he said.

He added that uncertainties Uganda is facing are composed of several challenges such as consistent economic growth without any positive impact on household incomes. “Our economy is consistently positing positive economic figures but it does not reflect in the pockets of Ugandans or even on their kitchen tables,” he said.

Ssewakiryanga said that poor implementation of Environmental Policy measures has made environmental and natural resources to be at risk yet they are the backbone of Uganda’s national and household economy.

Other uncertainty included Land grabbing and eviction in both rural and urban area which have left many Ugandans homeless, absence of Electoral reforms and the Abuse of human rights and impunity.

Meanwhile, Sarah Bireeta of Centre for Constitutional Governance attacked government officials who keep on blackmailing Civil Societies that development partners are using them to fight government yet the government is the biggest beneficially from these funders.

“The work of Civil Society is enshrined in the democratic principals under article 38 of the constitution, but also if you look at the excuse that people who enjoy name calling use is because we work with development partners on some of our projects but the same development partner fund government. They give 75 per cent of their funds to our government and 25 per cent or less us so who is using who?” she asked.