Analyzing Bungabet in its first few years of stay in Uganda

With the growing number of customers,the company has managed to expand with various branches all over Uganda.

We managed to speak with the Chief Executive Officer (CEO) of the company Mr Prosper Tuhaise who explained the gold behind the scene.

The CEO said that ever since the company came to Uganda, he has never stopped thinking of the best means on how Bungabet can be of importance to the citizens.

Tuhaise noted that the company has managed to make a brand under the slogan bet Uganda build Uganda as well as physically giving back to the community.

“We have sponsored over ten driver in the National Motor Cross championship who have kept our flag up. These have given us great exposure since we give them what ever they need.” Noted Tuhaise.

He added that Bungabet was the only company that managed to open eyes of Ugandans that there is still a big hope for the country to play the world cup.

This was witnessed when Bungabet sponsored Ex Arsenal star Emanuel Eboue and the former Senegalese defender Ibrahima Sonko who did not only come to analyse world cup but also bring hope to Ugandan footballers.

“You remember that Sonko and Eboue visited the masaza cup and many Ugandans never thought of seeing them physically” Said Tuhaise.

The CEO added that they are still working hard to make sure that more Ugandans benefit from their home based company.

The company also donated to Bukiro health centre 111 as well as to St Ritah primary and Nursery school scholastic materials.

Communicate with your spouses for peace, progress – Speaker Kadaga 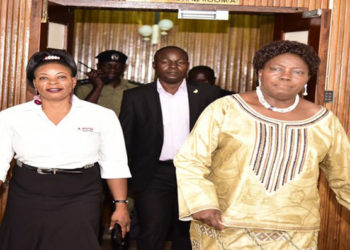 Communicate with your spouses for peace, progress – Speaker Kadaga

Dangote Now the Most Valuable Brand in Nigeria