by Allen Kisakye
in Entertainment, Showbiz
26 1 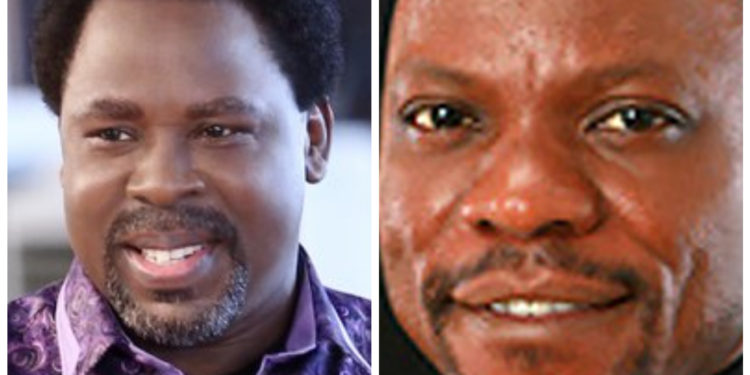 TB Joshua, the founder of Synagogue Church Of All Nations (SCOAN) died in Lagos on Saturday evening shortly after concluding a programme at his Church.

News about this death found Ssenyonga on the pulpit preaching to his congregation at Christian Life Centre Church in Bwaise on Sunday and he immediately started spitting fire at the deceased, saying that he got what he deserved.

The outspoken pastor who seemed happy about this sad news said that death is the perfect punishment for Joshua because he has destroyed the lives of a thousand people through his false gospel.

“If one person can destroy a thousand lives, ten thousand live, he has a following of one million people yet he is fake. He taught these false prophets here in Uganda what to do. He lies and he fakes different things,” Ssenyonga told his followers.

“This man has destroyed so many lives. The bible says, ‘it is not good for a sinner to die in his sins but if that sinner is killing other people, why does he think that his one soul is better than a thousand souls he is destroying?”

Jubilant Ssenyonga further said that he isn’t celebrating the death of TB Joshua, but he is happy that his followers will now find a way in Christ.

This isn’t the first time Ssenyonga is speaking ill about the dead ‘false’ pastors, as a few months back he celebrated the demise of Pastor Augustine Yiga who according to him was fake, conman, rapist who infected a lot of girls with HIV.

ASHRAF SIMWOGERERE: Dear Mr President, I don’t think it’s wise to employ only the rich especially by somebody like you who fought with the poor

ASHRAF SIMWOGERERE: Dear Mr President, I don't think it's wise to employ only the rich especially by somebody like you who fought with the poor