by Allen Kisakye
in Entertainment, Showbiz
121 1 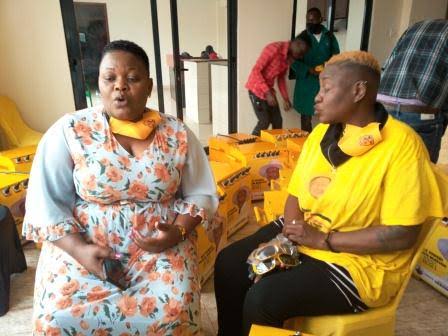 Troubles among National Resistance Movement (NRM) affiliated artistes are seemingly not going to end anytime soon, as the ‘money’ factor continues to tear them apart.

From Bebe Cool and Ronald Mayinja’s face off, now Jennifer Nakanguubi aka Full figure has revealed how fellow Presidential Advisor Catherine Kusasira plotted to burn down her struggling cosmetics company which produces Kusasira Cream and then blame it on Bobi Wine’s National Unity Platform/People Power supporters.

Full Figure, during an interview on Spark TV’s Live Wire on Monday claimed that Kusasira ate all the company’s profits with her young South African boyfriends, and then came up with the idea of setting her business on fire so that she can collect more from State House.

“Kusasira was given Shs1. 1billion. She ate all the profits when she started dating young South African men till when the factory went bankrupt, she then told me to help her burn down the company and we blame it on Bobi Wine’s People Power supporters so that she can go back to State House and beg for more money,” Full Figure said.

However, Kusasira denied these allegations, claiming that Full Figure hates her and is making up stories to destroy her reputation.