by Allen Kisakye
in Entertainment, Showbiz
47 1 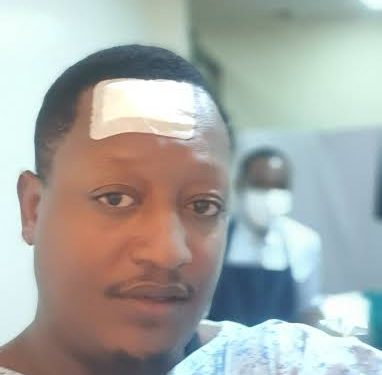 The Magic 1 HD boss has been struggling with a Lipomas (Fat tissues) which mysteriously grew on his forehead, till when he opted to go and have it removed.

Disclosing news of his successful operation on Friday, Kazoora said that samples of the fat tissues were taken to Uganda Cancer Institute for further check up, but he is optimistic that all will be well.

“Operation done, thanks to Dr. Kiwewa Ronald and everyone at TMR International Hospital, the Lipomas or fat has to be taken to the cancer institute just in case, but it’s usually fat,” he said.

He further advised people who have the same issue like his to not fear going for this operation because it’s cheap, quick but yet very beneficial.

“I know some friends and several on the streets with the same problem. please get here the operation is just 400K and a nice bed of 600K but you don’t need to spend a night it’s just 30 minutes’ operation. Am getting a bed because the nurses are nice to me and nice around the corner lol,” he said.

According to doctors Lipomas is a lump under the skin that occurs due to an overgrowth of fat cells, it is considered to be tumours, which means that they are non-cancerous growths, however, they are sometimes painful, cause discomfort, have complications among other symptoms.