by Andrew Alibaku
in Entertainment, Lifestyle
5 0 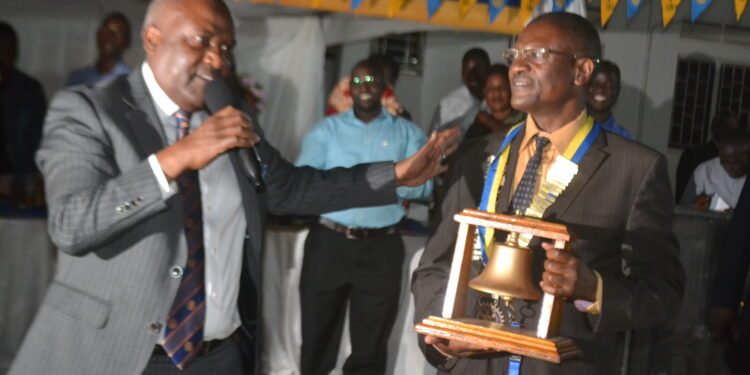 The Former Chief brewer at Nile Breweries Ltd, Moses Musisi who recently retired from the mixing and tasting quality of the beers was installed as President of Rotary Club of Jinja taking leadership from Josephine Bichachi.

Rotarian Emmanuel Katongole the owner of Quality Chemicals Industries who has so far contributed to Rotary Services International about shs1.8bn, described Mr Musisi as a very hard working and determined person who loved his profession that has led to people enjoying the good beers all over the World.

“As you take this leadership of Rotary to serve humanity I urge you to focus on maternal health,children’s health, community social projects above all care for the needy and also to continue supporting the ongoing projects of the clubs in the communities,” said Mr Katongole.

Mr Musisi in his speech said his first priority is to focus on health projects in support of expectant mothers,education for special needs persons both at primary,secondary and institution level.

Mr Musisi appealed to the public especially in Busoga region that the Rotary has organised free heart surgery for children with heart problems that have been recommended for operations.

Mr Musisi retired after transforming the brewing industry with introduction of sorghum beer in Africa( Eagle Extra,Eagle dark and Nile Gold brands).The final taste of any beer produced at NBL was done by him.

The former brewer who won international awards in brewing studied microbiology and chemistry and served in the company for 20 years.