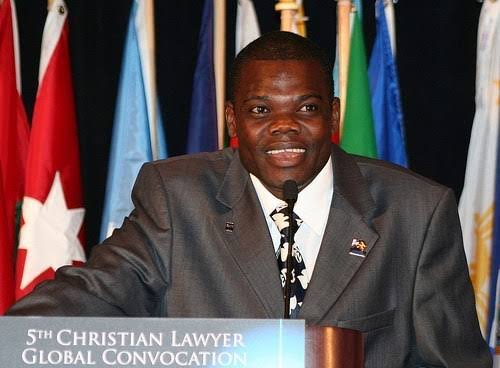 Former Uganda’s Deputy Ambassador to the United States of America who is currently serving in Khartoum as Charge d’Affaires, Dickson Ogwang Okul, will be enthroned as the Chief (Awitong) of Pala Ocol clan on February 5th, 2022.

The dedicated God-fearing lawyer is expected to be crowned at a colourful ceremony to be held at his ancestral home at Baramindyang, Ayer Sub-county in Kole District, about 15 kilometres from Lira City.

The unique Lango traditional ritual will be attended by hundreds of dignitaries, Politicians and the diplomatic corp.

Until his assignment to America by His Excellency President Museveni in 2010, Ogwang served as a Public Prosecutor at the Directorate of Public Prosecutions with a sterling reputation for pursuing peace and reconciliation.

As a Public Prosecutor, he established himself as an arbiter who finds ways to settle cases restoratively.

He graduated at the top of his legal courses while serving on active duty, grew up in extreme poverty as a rural boy in Ayer Sub-county in the present Kole District.

Has over 20 years of professional development in national and international leadership. Has been active in the national politics of Uganda; was involved in the 1993-94/95 Uganda constitutional making processes as a student activist being the then president of Uganda National Student Association (UNSA).

From teenage years ,Ogwang taught his fellow students to avoid violent school strikes and demonstrations but showed them peaceful ways of negotiating issues issues with school authorities and boards to find amicable solution that his school faced.

Later in life he became a champion of peace and conflict resolution becoming the First African to be Certified as an International Conciliator by the Institute for Christian Conciliation, USA before serving as a Special Envoy of President Museveni to the United States on LRA and Northern Uganda Recovery Issues.

As for clarity, Ogwang promoted the strategies that led to peaceful means of getting out ex LRA combatants through the strategy of defection, having them rehabilitated and reintegrated in to communities prepared to receive, accept, forgive and live with them in the transforming communities of Northern Uganda.

The Peace Ambassador currently in the conflict Khartoum is known in Lango for his remarkable work with Lango Kingdom where with the help of Advocates International, Uganda Christian Lawyers Fraternity, Military Fellowships and other partners in empowering Cultural Leaders in approaching post conflicts disputes that arose mainly from Land and Domestic Relations. He taught his community principles and practices of conflict coaching, negotiation, mediation and arbitration.

It’s no surprise the Kingdom and people of Lango have entrusted Ambassador Ogwang to join this highly respected rank of leadership and immediately appointed Minister in the Foreign Affairs docket of the Lango Kingdom.

Why David Katureebe Foundation is committed to invest in sports