by Stephen Kalema
in Business, Companies
3 0 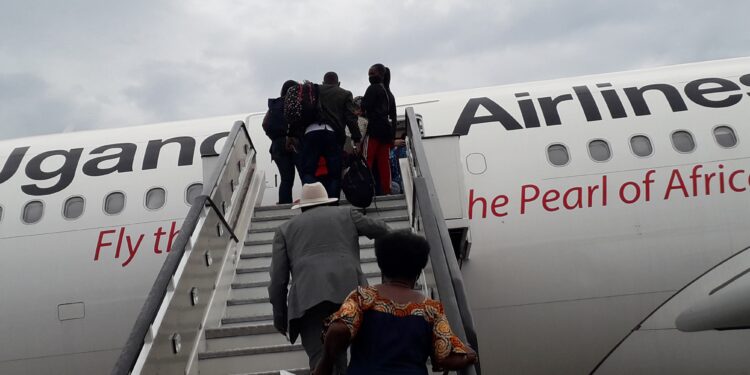 Uganda Airlines has been granted landing rights in China.

According to Shakila Rahim Lamar, the Corporate Affairs Manager at Uganda Airlines, the national carrier has been given an early morning landing slot at Guangzhou Baiyun International Airport, a major airport in Guangzhou, Guangdong province, in Southern China.

Speaking to this website on Saturday, Shakila said the national carrier will be flying to China once a week as they wait for China’s Civil Aviation Authority (CCAA) to grant them more flights in the future.

“We are delighted that China Civil Aviation Authority has granted us rights to start operating scheduled flights in China, definitely this comes in as great news and we are excited about that. This weekly flight is to try to control Covid infection as they monitor the progress of how the flight will be and then subsequently the authorities in China can look at increasing the numbers,” she said.

Shakila further noted that soon the Airline is going to announce when the direct flights to China will commence.

“I urge Ugandans as our prime clients to continue supporting the National Career to enable it to achieve more success.”

The direct route to China is such a big score for Uganda Airlines to expand beyond Africa and become a major international airline. China is the second route for the airline after attaining the Dubai route last year.

According to Shakila, the China route will enable Ugandans to do their business travel directly.

Also according to a study conducted by Uganda Civil Aviation Authority five years back, the top five major destinations for Ugandans travelling through Entebbe International Airport were the United Arab Emirates, Kenya, China, the United States of America, South Africa, and England. And China is the third most popular destination since most Ugandans who travel for business end up in Guangzhou, Shangai, Beijing, and Hongkong.

As of now flying to China, one must first fly to Dubai for about five hours, and spend some hours in transit, before connecting to another flight from Dubai to China, which takes about seven more hours, however, if a direct flight from Uganda to China commences it will take a total of about nine hours.

This is also a bigger score to the business community since International Trade reports indicate that China exports varieties of goods to Uganda, these include; electronics, garments, footwear, and machinery. Likewise, Uganda exports 90 per cent of its agricultural goods to China.

Meanwhile, according to the Airline, their next struggle is to see that they secure landing rights in Mumbai and London in the United Kingdom.