During the meetings, Illinois leaders and investors expressed interest in coming to Uganda next year as well as establishing ties between the Kampala government and the Illinois State. 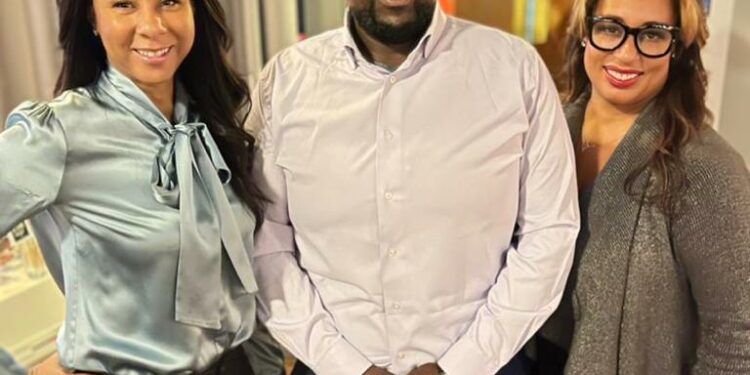 Kigozi with Candace and Senator Toi . During the meetings, Illinois leaders and investors expressed interest in coming to Uganda next year as well as establishing ties between the Kampala government and the Illinois State.

ShareTweetSendShare
Illinois state in United States is famous for giving Barack Obama to America and the world. And the Office of the President through the Office of the Senior Presidential Advisor on Diaspora Affairs has moved to establish trade and investment links between Uganda and Illinois, a state famous for a successful black community.
Mr Isaac Kigozi, who heads Trade and Investment has held several meetings with potential investors, political heads and scholars in Illinois in a bid to attract them to set up business and trade links with Uganda.
Mr Kigozi, who grew up in US, where he worked in media and film world, has since committed his services to the government of Uganda, where he markets the country as an investment destination.
On his recent mission in US, he has held successful talks with Illinois Senator Patricia Van Pelt, Cook County Commissioner 6th District, Hon. Donna Miller, Dr. Donna Leaks the Illinois 2021 Superintendent award winner, Hon. Toi Hutchinson the Senior Advisor to Illinois Governor, Counsel Candace Tillman Tyndall and Doctor Bill Winston the Founder of Living Word Christian Center among others.
Mr Kigozi who was also behind singer Akon tour of Uganda, said President Museveni has been driving a campaign to attract historical Diasporas to come back to Africa, understand who they are, connect with their history, heritage, get a sense of belonging and understand that their true home is Africa, before they can contribute to the welfare of the continent.
“President Museveni has developed a strong strategy to entice many people especially Africans living in the diaspora to return home, share their knowledge and help in the development of our country and the African continent at large,” Kigozi said.
While in Illinois, Kigozi has fostered strong trade and investment relationships between Uganda and US Historical Diaspora.
“We feel that every African American has value and we want them, we need them and we welcome them to come to Uganda and assist us in taking our country to the next level,” Kigozi said, adding that to achieve the objective, President Museveni designated the Office of the Senior Presidential Adviser on Diaspora Affairs run by Amb. Abbey Walusimbi to attract blacks in US to return home . The black community account to more than $60bn dollars to American economy.
Kigozi observed that a similar campaign was launched in 2020 which saw a number of historical African Diaspora come to Uganda from Chicago, California, Atlanta, Texas and Les Vegas and so far, 6 businesses have been registered while two people have already purchased land.
During the meetings, Illinois leaders and investors expressed interest in coming to Uganda next year as well as establishing ties between the Kampala government and the Illinois State.
On her part, Hon. Donna Miller noted that she will take it upon herself to set up trade missions between Uganda and Illinois, open up markets for Uganda’s agricultural products such as Coffee, Cocoa, Vanilla among others.
Dr. Donna Leaks observed that there is need to establish linkages and exchange programs between Ugandan universities and the Historical Black Colleges and Universities (HBCU) so as to boost the education sector.
Counsel Candace Tillman Tyndall noted that she will be coming to Uganda to set up establishments and investments in the real estate sector.
“I do real estate development, I would love to set up both residential and commercial estates in Uganda. I am a big supporter for the campaign to encourage African diasporas return to Africa because for years we have been deprived of history and heritage,” Candace said.
Dr. Bill Winston, the Founder of Living Word Christian Center expressed his love for Uganda noting that it’s one of the Nation that puts God first and will be looking forward to establishing a long-lasting church relationship between Uganda and his Ministry. As a CEO of Golden Eagle Aviation, Dr. Bill noted that he looks forward to boosting Uganda’s aviation industry as well as offering training to Uganda’s pilots and students.
Do you have a story in your community or an opinion to share with us: Email us at editorial@watchdoguganda.com