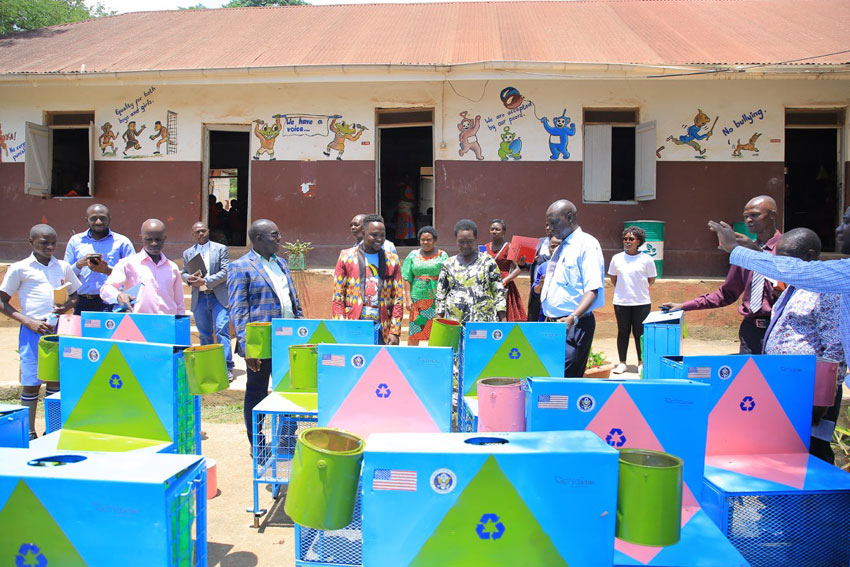 After the launch of Clean Air Campaign, each school was given 16 and the head teachers and environment teachers agreed to become ambassadors for change by starting to sort waste

The World Health Organization estimates that 13,416 people in Uganda die from air pollution illnesses or conditions worsened by exposure to air pollution (WHO, 2018)

Recent reports have ranked Kampala City as one of the cities with the most polluted air in East, Central and Southern Africa.

In Kampala City, waste originates from different sources, including households, schools, markets, industries among others.

The waste is poorly managed through dumping it at illegal dump sites which pollutes the soil, and blocks drainage channels leading to flooding and burning that pollutes the air affecting people’s health.

Open waste burning is common in residential neighborhoods and schools which contributes to air pollution in Kampala.

In a bid to seek solutions for this, in 2018, a team of 11 Ugandans were privileged to be taken by the US embassy under the Alumni Engagement Innovation Fund (AEIF) on an exchange program to the US to learn what the country was doing in terms of air quality monitoring.

They were looking at how they (United States) were managing air quality in communities, schools, higher institutions of learning and how the policy was generally guiding them to help mitigate air quality.

“When we came back we worked on a project to buy low cost motion sensors that could measure the level of pollution in the City which is taken on by Kampala Capital City Authority (KCCA) and these have been put in different strategic places in Kampala and they are monitoring air quality in the city,” says Emily Namanya, the sanitation and environment projects coordinator at KCCA.

Up until 2016, Uganda had only one air quality monitor owned by the US Embassy Kampala, measuring PM2.5 particulates as an indication of the air quality around its surroundings.

Namanya explains that the alumni were further tasked to come up with a place where they would implement a programme tailored to preserving the environment and they decided to take on schools because as, KCCA, they work hand in hand with schools and know their challenges.

“We were able to write a small proposal that won us a little gran to help us carry out different activities in five schools. We chose one school per division to make up for the five divisions in Kampala. The main goal is to make sure that we keep our air clean, making sure that no waste goes to landfilling. We want to make sure that whatever you do that stops you from landfilling will contribute to clean air,” she explains.

Schools are a critical part of communities hence cultivating practices to reduce waste need to start there, so that children can learn and transfer the knowledge and skills to their communities.

For long, waste management has not been good in schools as they have no recycling knowledge. Many schools burn their waste contributing to air pollution.

“We decided to start with a few schools to change the narrative. Amongst the activities that we wanted do is teaching children proper waste management, telling them the disadvantages of burning waste that pollutes the air making a detrimental effect to their lives,” Namanya shares

Eco Action Uganda being an organisation based in the community with experience in working with waste management, was identified to be the implementing partners and alumni had to come in as facilitators.

According to Reagan Kandole the founder of Eco Action Uganda, the implementing partner, his team together with alumni and a team from KCCA moved around and identified five KCCA schools that were supposed to work with support from the US Embassy.

“What we did is we went around and identified the problem of proper waste management. So we decided to design together with the children a proper waste bin that can handle bio degradable waste, plastics and paper. At the end of the day we came up with a design and EcoArt took it up to design and execute a prototype,” he says.

Eco Action Uganda engaged local plastic collectors in gathering materials for the designing process. It was a collaboration with the community of about 30 collectors most of these being women.

Kandole explains that after making the prototype, they shared it back with the schools to get feedback which they used to produce it (the dustbin) massively.

“We produced about 100 dustbins that we later supplied in schools and to every five schools each getting 20. The concept was using recycled materials to appear in the bins,” he shares.

Kandole explains that they later started engaging schools in Eco clubs before they launched the Clean Air project in schools after supplying the dust bins.

The idea was that every school has to have an eco-club as these clubs would at least engage 30 to 50 children and they would be the ones to implement the clean air and proper waste management ideas.

“Our main interest was engaging the children in recycling workshops, to really have the three R’s elements of recycle, reuse, reduce but also find innovative ways of dealing with waste rather than burning it. Through MDD, these clubs would be tasked to come up with songs and skits that tackled issues to do with environment.”

Kandole explains that they had hoped to engage more children and that is the time the country was hit by the Covid-19 pandemic.

The idea was to come up with a training manual with all the information that the teachers would use to train the children on proper waste management but also relating to the national curriculum to see that whatever they are doing is in line with the curriculum.

Eco Action Uganda started 8 years ago, they support marginalised youth and women to come up with innovations in waste management but mostly concentrating in improving their livelihoods.

How the waste is turned into other reusable products is the training Eco Action Uganda and the alumni are going to start because at the end, they want to minimise the amount of waste that is taken away to the land in a bid to end waste burning that pollutes the air.

“Each schools is going to have a sort of demonstration garden. Each waste that is going to be collected is going to be turned into organic manure that will be used in the garden. Part of the training is going to be on urban agriculture, how they can turn waste into a fertiliser,”Namanya explains.

She adds that in the next phase they are going to train hands on how to use these materials.

“We want to train these youngsters and their teachers that what you use can actually be turned into other reusable stuff that have a much bigger function and value. We hope to upscale this, we started with five schools and we want to see how we can take this initiative to all other public schools in Kampala.”

They also have a plan to engage a number of schools both in and out of Kampala to do a festival where schools would compete on different innovations under a theme on Environment.

Worldwide, we are producing over 300 million tons of plastic each year, 50% of which is for single use purposes.

More than 8 million tons is dumped into the ocean yearly, becoming a big environmental issue and threat to our ecosystems and biodiversity.

Kampala city, Uganda, generates 750 tons of waste a day of which half is collected and sent to the dumpsites and the other half, mainly plastics and polythene, is irresponsibly disposed and finding its way from our communities and streets, to drainage channels, to rivers, lakes, and wetlands.