HENRY MUTEBE: Why you should give your Ugandan woman pedicure

by Watchdog Uganda
in Conversations with, Op-Ed
8 0 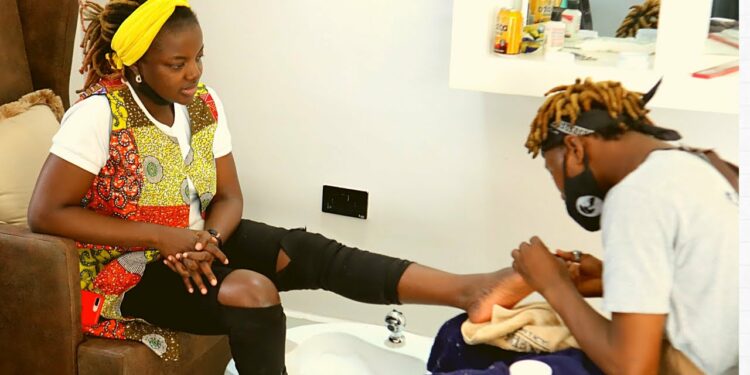 If you are a man, dont read this post. I will not be responsible for how you feel at the end of this post.

A couple of days ago, I wrote about how the salon experience has changed for men. The extended facial massage has become the beer that numbs men to the pain of losing money.

Today, men are paying a whole bag of cement to just catch a few minutes of the wonders of Kampala’s masseuse who, like Eve, has invaded the Garden to lead men into temptation. The salon has become a hospital where the men, sick from the stress and grind of the city, release themselves to the soft hands of Kampala’s masseuse. The men’s salon, has become what Cindy called ‘Total satisfaction’.

My post stirred the settled waters and sent ripples that unsettled the male establishment. As expected, it was met with all tribe of resistance. I was accused of disclosing ‘our secrets’ as men. I have since been summoned to answer charges of breaking men’s code. I am to appear before the disciplinary committee slated to sit on 14th February during the men’s conference at a location I am not under liberty to reveal.

Today I visited one of the salons in my neck of woods to double check if what I had written was correct. I got a shock of my life! Forget everything I wrote. Forget the massage given to men in those saloons. Forget it all. There is a devil called pedicure in those unprofessional salons. Chei !!!

I had never taken time to observe a pedicure. Eh eh My Lord, I wonder!!! I would not recommend that you ever observe one. It is a bad story. You will not like it. A pedicure will make you insecure. DO NOT LOOK, DO NOT STOP, Just continue to where you were going. I am giving clever for free.

I don’t even know if I should continue writing or I stop and not tell you what I saw. If you are strong hearted and you are still reading, let me paint for you a picture of what I saw.

My brother, there is a whole industry for pedicure. The masters of the craft have read the script so well that any client they chance on will without a shadow of doubt return. So, if you see a woman doing pedicure, she is probably doing it for the 100th time, and he even has her number. My brother, that is how bad things are. It is an industry where these boys have learnt how to retain their clients.

First, the woman makes an appointment with the guy. They will talk on phone for 30 minutes. Remember the last time you talked to her…it was 2 minutes, right? When they are talking to these boys, they talk for 30 minutes. They discuss the pedicure plan. The discussion, which involves a table of contents involves discussing the pre-arrival, the colours of the nail polish that will be applied, how it will be done, how it will feel, if they will like it… it’s a whole book. They discuss the design that will be put- exhaustively discussing each design and the rationale for it.

After the talk on phone, the woman will find an ‘easy’ wear/dress. Remember, they are going to relax. Nanti mbu for us we give them stress, the children also stress them…so they are going to relax. So, after dressing ‘easy’ (by that I mean a short skirt, usually below the knees), they call the guy to comfirm they are going for the pedicure. Imagine they already called but they call again. The boys have learnt how to tell these women what we don’t tell them. When the woman calls to comfirm if they are coming, they answer, ‘Okay Baby, Nkulinze mukwaano’. They prolong the word mukwaano. Nga the woman arrives.

The boys sit on a mat or small stool while the woman is given a higher stool. These boys often wear legging-like pants that are skin thin. Remember for us in the saloon, the person doing the massage is usually behind us…or above us. Here, my brother, these boys face the woman- direct. And she is seated on a raised stool giving the man angle 45 to observe anything he wants. I am talking about those unprofessional ones.

They then start what would be a very torturous journey to any male observer. First they begin by gently picking the legs of the woman and they firmly place them on their thighs. The woman’s legs rests on theirs. If you are lucky, they put a towel between their leg and the ‘client’. They pretend to clean the whole leg of the woman yet the contract is limited to the feet. But these boys have learnt how to give themselves assignments.

They take another 30 minutes washing the legs…as if the woman didn’t bathe before coming. After massaging the leg, they then turn to the nails. They count the toes, as if its also part of the factors for billing the client. The counting is not done without ritual. They caress them, wash them like 17 times before finally turning to the lower part of the feet. At any point, their hands can return to the leg of the woman. Many women trust these boys and just let them handle it all.

Once the feet and toes are properly washed, they tell the woman that they are waiting for the feet to dry before they start. Meanwhile, they continue re-washing the legs. Don’t ask me how the women are feeling at that point. Ask me how am feeling about this whole process.

This whole time, since you started reading this, those boys are talking to the woman, shuffling stories, telling them how their nails are very beautiful…and how they should not take long without doing pedicure because they will spoil their nails….and how they missed them while they are away and why they should never fail to come even they don’t have money.

They advise the woman to always come for pedicure to continue looking as beautiful as she is. Remember these are things we are not telling our woman. So she enjoys all those praises.

Now, as we talk now, these boys have spent one hour on the woman…and they have not even started. He leg is comfortably rested on guys thighs, they are having very serious conversations, his hands wont rest without touching the woman’s upper part of the leg (I don’t even want to say thigh because…it is annoying to say the least). These boys continue to wait for the feet and nails to dry before they start applying those chemicals.

After two hours of just conversing and washing the leg, they then apply some stuff on her nails. They then scrub the nails until they become clean and smooth. They again wash. Remember the washing extends to the whole leg…including parts that are gazzated for use by only bona fide authority.

After another one hour of rotating around cleaning the nails, they then apply the chemicals…one by one until they dry. They then apply the designs the woman wants. If only you read the names of those polishes…hmm.

Anyway, you would have thought that as they do all this, they are wearing gloves. NO. Man, they are bare hands, touching the woman for four hours with their bare hands. The whole time they are caressing her legs, she is laughing and feeling totally relaxed.

After they complete this very torturous session to any male observer, the woman says, ‘Kankuwe my number onkubireko next time I may want you to just come and work on me from home.’ Dude takes the number and saves it as ‘Baby 2’.

Man, you would think after four hours, they are done. Guy tells the woman, ‘baby, sooka olinde zikale. Njagala olabike bulungi baby kuba gwe abasinga.’ So they spend another one hours together, there, with the gu man sitting right in front of the woman, looking straight in her eyes and his hands moving rhythmically on the woman’s leg…moving from top to bottom…top to bottom…back and forth…down and up…again and again. 😞

These women that gave us a hard time to even allow us just stand next to or put our hand on their shoulder, boys are down there freely touching, looking anywhere they want and caressing as long as time can allow.

I left the salon very angry. I just called my wife right now and asked her when she had her last pedicure and where. She laughed so hard. I have told her I am doing her next pedicure- free. Kyoka when you ask women if this is not too much, they say mbu those boys mean no harm and the women ‘feel nothing’. The way I am annoyed. I am moving with a cane right now.