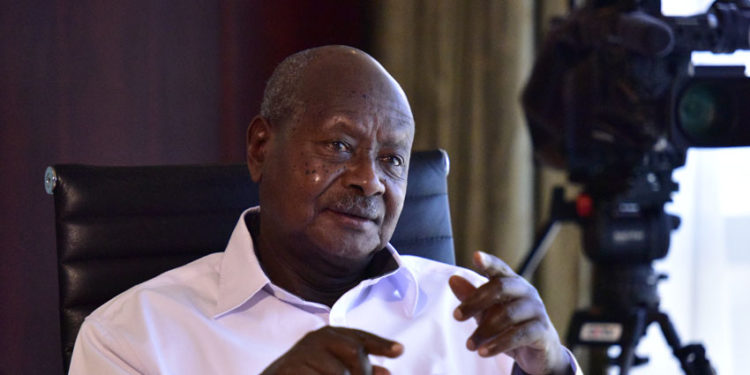 A section of opposition leaders met in a bid reported to be about the possibility of forging unity of purpose in the coming elections. Among them was DP’s Nobert Mao, the interim leader of NUP, Kyagulanyi Sentamu Robert and others. Facilitators as seen in photographs released to the public included the respected Dr. Paul Kawanga Ssemogerere, a retired leader of DP who contested against President Yoweri Museveni and lost to him in 1996.

Ssemogerere was leader of DP in 1980 when the elections were blatantly rigged by UPC and could have become president if it wasn’t for his party’s weakenss to reclaim his victory. He was to serve in the Obote government as leader of opposition and later became a minister when NRM took over. Then he “jumped the queue” in 1996 and contested against his former boss, and lost to him. He gradually retreated from leadership and has since sat back in retirement from where he was called to facilitate the talks we saw.

Why did they wake him up from his retirement at that age? The answer is clear; old age is wisdom. Ssemo (as he is fondly called) retired prematurely when he was still a useful elder. His quitting prematurely is partly responsible for DP’s woes which have seen the oldest political party “succumb” to new parties, and now he has to negotiate with the newcomers to keep DP from dying.

However, as a “private” senior citizen, his role is only advisory; he cannot enforce or effectively monitor if his ideas are followed as agreed. Had he remained in substantive leadership, he would wield some real powers to cause compliance and, that way, he would be more useful unlike now when they can choose to disregard his views.

Elsewhere, the flagbearer of the Forum for Democratic Change (FDC) party for Mayor of the new Jinja City is Dr. Frank Nabwiso, a former Parliamentarian, academician and administrator who has been in service dating back to the 1960s.

Why does it matter that FDC picked Dr. Nabwiso as its flagbearer? Nabwiso is older than President Museveni. Were there no younger persons to front? They were there. Why didn’t FDC automatically bin Nabwiso on account of old age if it really mattered? He may not win- because of being in a wrong party-but the message is already sent.

Another case involves the late Hajji Nasser Ntege Ssebaggala (may his soul rest in eternal peace); having been pushed out of leadership by both bad luck and endless intrigue and bickering in the opposition, he had become a well wisdom for newcomers who flocked to him for advice and they may have benefitted if they listened well while others were exploiting him because he was a “retired and tired” mukadde.

In 2005, when the late Ssebaana Kizito sought the leadership of DP as president general, his opponents used the age factor to try and destroy his candidature but he famously told them off “brain power does not expire”. People like now Mukono Municipality MP, Betty Nambooze defended him saying “leadership is not like carrying bags of cement”. But today, they mock Museveni for his age. Double standards!

There are those who believe that being old is detrimental to one’s capabilities. That may be true but depends on who we are talking about. There are always exceptions and Museveni is a unique exception. That’s why some live to over 100 years and remain full bodied while others even at 60 they are worn out.

Every one of us looks forward to growing (old) but it should not be about passing time and piling years on one’s head; it should be about gathering life experiences that enrich one’s understanding of how to live in society and enable others live.

All leaders who have fallen to grass in their were always a mistake waiting to happen unlike Museveni who, apart from being very cautious in all he does, is an avid student of history, deep analyser of the present and spot-on predictor of the future. That’s what seniority means! It gives one bargaining power and unequalled respect.

In the US presidential race, both President Trump and his Democrat rival, Joe Biden, are senior citizens. Why and how did they win their respective party primaries where there were younger competitors and why is there no “general representation” in the race? Because

So, Museveni may not be celebrated by all but he inspires enough numbers to remain politically relevant. How he does it is his unique gift which cannot be tagged to age because, as they say, age is just a number and each one has his or her own. But what do you use yours for? Museveni uses his to add value to every Ugandan the best way he can, and he will do more for the rest of his life.

As we head into the next presidential election, the matter of seniority stands tall as an advantage rather than a disadvantage.

The author is a Private Assistant to H.E the President in Charge of Media Management