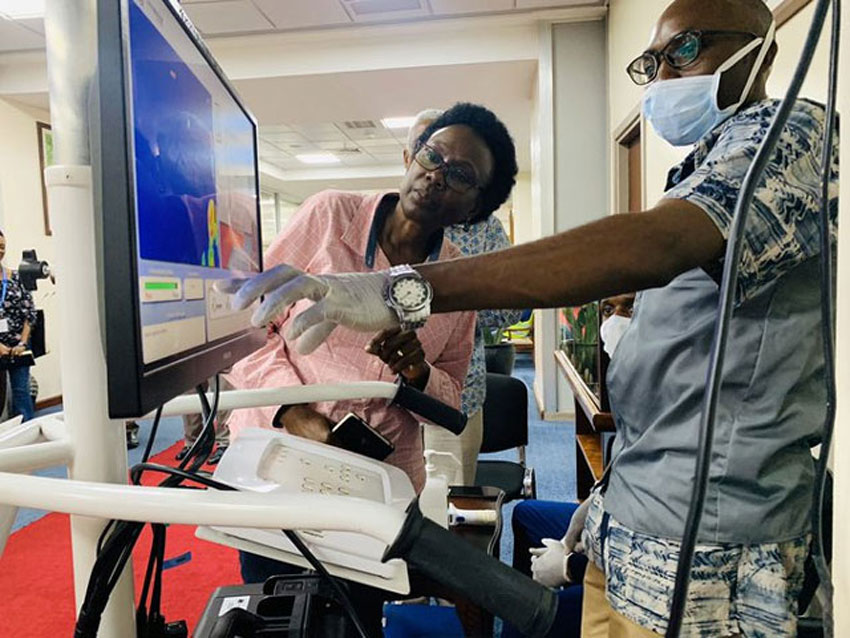 Until recently, very little had been heard about Uganda’s scientists. They’ve been going about their business extremely quietly and very few have seemed to pay attention. The year 2020, however, has brought them to the fore and many of us have come to take notice.

When the World Health Organisation declared COVID-19 a pandemic, there was a stampede world over with Uganda not an exception. Accordingly, President Museveni instituted an unprecedented lockdown that saw businesses, schools, churches, mosques, salons, lodges, bars, night clubs et al come to a standstill as he called upon all Ugandans to turn their attention towards fighting one enemy-COVID-19!

It was a welcome intervention and it was at that moment that the Ministry of Health and its scientists took centre stage. Under the Public Health Act, the President would give guidelines and directives after regular briefs by health experts. Indeed in his speeches, he would regularly refer to the guidance of the scientists and health experts as the basis for all the decisions he would issue and the whole country obliged.

As time went on however, there has been a variety of incidents that have brought the guidance of the experts into some considerable disrepute, raising so many questions about their expertise and integrity.
In his budget speech, the President informed the country of how there was a confusion at the Makerere University laboratories where some individuals had been declared positive for COVID-19, only to for further tests on the same individuals to come out otherwise! The Minister, Dr Ruth Aceng later came out clear the air about the discrepancy, but the damage had been done already. The incident only served to cement a public belief which had been echoed by Tamale Mirundi in his One-on-One with Tamale Mirundi which used to air live on NBS TV that some of the COVID-19 results were being exaggerated!

Amidst increasing suspicion, came worrying reports that aired live on NBS TV’s Amasengejje of how COVID-19 suspects had been asked to return home and carry their own mattresses and bedsheets since the quarantine centre in Kayunga didn’t have those facilities. Yes, it’s possible that there were no mattresses and bedsheets for the suspects to use, was sending them back home to collect theirs the right decision? One wonders what kind of science that is that allows suspected contacts of a disease that is believed to be highly infectious to return home and then back to the isolation centre! Wouldn’t that put those in the community at risk?

His Excellency the President, after recurring extensions of the lockdown, decided to ease it by letting loose a few sectors of the economy. Indeed a number of sectors were eased, among which was transport, public and private, with restrictions. Taxis currently carry 7 passengers and two crew members, totalling to 9 people. According to our scientists, those are deemed to be safe so long as they sanitise and wear face masks. The same SOPs go for buses, which however carry about 35 people. One wonders how science deems such passengers, confined in the same enclosed vehicle safe but a solitary passenger riding on a bodaboda unsafe! It also remains as discombobulating as they come how a glass-like structure that was innovated by the bodaboda cyclists as one of the ways to mitigate the spread of COVID-19 can be more highly infectious than the taxi and bus seats with a cloth covering! Which of those is easily sanitisable, a cloth or a glass?

According to our scientists, arcades are a hotspot for the spread of COVID-19 because they’re very congested with so many small shops and with so many people. That was the basis for suspending activities in the arcades. Yet scientifically, the arcades would have continued working with SOPs, especially with those arcaders working in shifts. For instance, if a shop has four traders operating in it, two would work today and two the following day, just like what has happened with ministries and other essential departments whose staff were reduced by halves as the President guided. It wasn’t done and the arcades remain closed to this day.

What has happened as a result? Well, as I write this, all traders who operate in arcades are in town, seated on verandas, in close contact with one another and with no face masks. Those with cars like at Nabugabo, have all paraded them in front of their arcades and turned them into shops. As a consequence, the whole place has become extremely congested with people, and it is very difficult to find a way through. This has rendered the element of lack of social distancing as the basis for keeping arcades closed an absolute mockery! The sight of huge crowds in Kikuubo, Luwum Street, Kafumbe Mukasa Road, Namirembe Road Nakawa Market, Kaleerwe Market Owino Market and many other places with no community infections being reported in these places makes one wonder whether the suspension of schools, places of worship, salons night clubs among others because they can’t observe social distance still makes the same level of sense it made at the start of this lockdown in March.

The other bone of contention is the issue of social distancing and wearing of masks at the same time. According to the World Health Organisation’s guidelines issued on 5th June, 2020, masks are only necessary in high risk areas and in places where social distancing is not possible. Very logical! Come to think about it:
The relevance of wearing masks is to contain all liquids and droplets from the nose and mouth of an infected person. This means that in the event of sneezing, talking or blowing one’s nose, the saliva and the mucus remain within the confines of the mask. In that case, there would be no possibility of infection even when there is no social distancing. Why then are schools, arcades, salons bodabodas suspended even when they labour to wear face masks and sanitise? Why do the scientists urge government to enforce wearing masks and social distancing in combination? Where is the scientific logic in that?

In the latest guidelines the Ministry of Health gave to the Ministry of Education so that if done schools would reopen, the scientists insisted on having only 10 pupils in a standard classroom for Primary and 15 students per classroom in secondary and tertiary institutions. This is a massive contradiction by the health ministry. The same people deemed it safe to allow 9 people in a taxi (7 passengers, a driver and a conductor) and 32/33 passengers, a driver and a conductor in a bus. If the floor of a standard classroom which by Ministry of Education standards measures 51.04 M2 was used as a parking yard, it would accommodate about 6 taxis! If those taxis carried 9 people, that would be 54 passengers compacted in a single standard classroom! On what basis then did the health experts come up with 10 pupils as the maximum number in a standard classroom? What is peculiar about buses and taxis that classrooms do not have? The Ministry of Health needs to harmonize their decisions to avoid being paradoxical, because what is good for the goose must be good for the gander as well.

I’m not a scientist, but the little I know about Science is that it is informed by evidence and statistics, not by fear of emotion. What is clear in Uganda though, is that our scientists here especially with matters COVID-19, have based their decisions on fear, emotion and anticipation. In a speech she made on April 2nd, Dr Ruth Acheng predicted that by May Uganda would have registered 18, 878 positive cases and over 500 people dead if the guidelines put up by government were not adhered to by Ugandans.

It doesn’t take rocket science to know that Ugandans are already fatigued in as far as obeying the presidential guidelines is concerned. They no longer wear masks, they don’t social distance, majority don’t wash hands, nothing! Where I stay, there’s scarcity of piped water nowadays, so people, young and old, flock the nearby well to access free water and over 100 of them at a time converge to draw water, with not even one wearing a mask! But here we are, almost mid-July. We haven’t had a single death and the total cases have just hit 1000 with over 900 recoveries.

The President said his scientists told him that Uganda had entered into a very dangerous phase of community infections and that there was need for extra caution. Almost a month on from that speech, no increased community cases have been recorded, no deaths, nothing new! Instead, there’s a significant reduction in the cases and a massive increase in the rate of recovery! So, has science been used to prove right those projections? No!

Conclusively, I think our scientists should stop acting in fear based on what has happened elsewhere and give scientific pieces of advice to the president, putting into consideration the goings-on here, not in Spain, USA, China, UK, Italy or any other countries that have been ravaged by COVID-19! Uganda must be governed in this COVID-19 period in the Ugandan context, not in the context of what happens elsewhere!