by watchdog
in Conversations with, Op-Ed
13 1 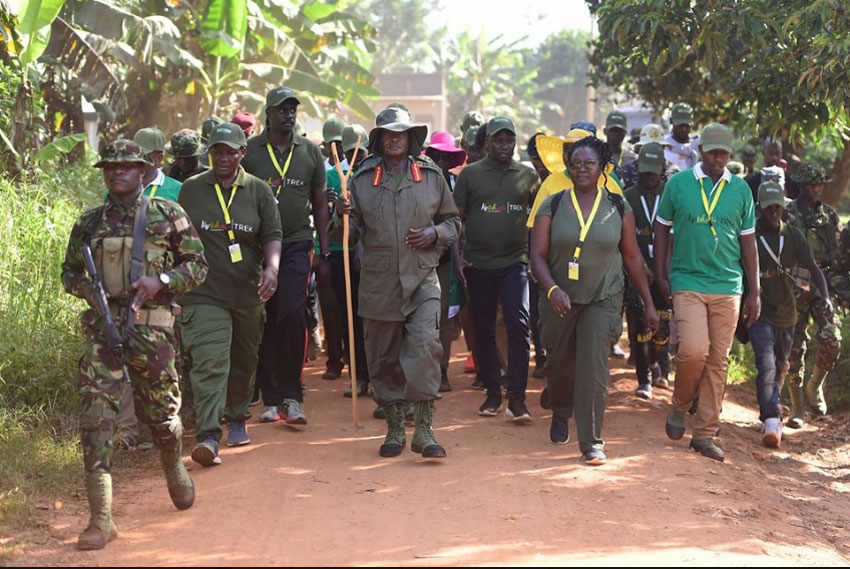 On the news last night was a report which said that in the course of the ongoing ‘Afrika Kwetu’ trek, Mr. Yoweri Museveni has walked seventy-five (75) kilometres. It is public knowledge that he began walking on Saturday.

That figure refused to leave my thoughts and it soon felt more irritating than a mosquito hovering around one’s ear.

I had no empirical means of expressing my skepticism, but fortunately, I was having dinner with two mathematicians. I laid the burden on my mind before them.

To answer my questions, these brilliant people considered the basic variables of speed, distance and time.

Below are the two most important conclusions we drew and the arising unanswered questions which defeat mathematics, physics and biomechanics combined:

i) In order to walk the seventy-five (75) kilometres that were reported as completed in the past three (3) days of the trek so far, Museveni has, on average, had to cover thirty-seven kilometres and five hundred metres (37.5 kms) on Saturday and do the same on Sunday.

To give the reader some perspective, the distance between Kampala City Centre and Nkumba University towards Entebbe is thirty-six (36) kilometres.

First, NTV reported that he covered twelve (12) kilometres yesterday (Monday). Assuming that that is true, we have to answer how he covered sixty-three (63) kilometres between Saturday and Sunday. The average distance covered would be thirty-one (31) kilometres and five hundred (500) metres for each day between Saturday and Sunday. He would have to walk from the City Centre in Kampala to Kajjansi and walk back to the same point at the City Centre in Kampala the next day.

Let us be generous and give him a margin of error of plus or minus five (5) and say that on Day One, since he was fresh and fired up, he exceeded the average of thirty-one and a half (31.5) kilometres and actually pulled thirty-five and a half (35.5) kilometres and slowed down on Day Two, but nonetheless was able to complete the remaining sixty-three (63)!

Alternatively, let us say that on Day One, he was just getting started so he underperformed and walked five kilometres less than the average (i.e. twenty-six [26] kilometres) and then pushed himself really hard the next day and made up for the uncovered thirty-seven (37) kilometres!

Obviously, this is a stretch of the imagination. There has got to be a serious explanation (perhaps a metaphysical one) to help us make sense of why he would cover between twenty-six (26) kilometres on one day, thirty-seven (37) on the next and then drop to twelve (12) on the third day!

If the twelve (12) kilometres that the news bulletin said he covered yesterday is a true figure for each day, then it means he has only covered thirty-six (36) kilometres since Saturday and, adding another twelve (12) today (Tuesday), he will have covered forty-eight (48) by sunset tonight.

At that rate (of twelve [12] kilometres per day), he needs just over two (2) weeks to cover the total distance of the trek. As advertised, this trek is slated for only six days—less than half the time needed by Museveni himself to complete that distance.

The glaring contradiction here is that going by media reports, he is already past the forty-eight (48) kilometre mark and no one can explain how he has covered the alleged seventy-five (75) kilometres thus far.

These mathematical facts raise hair-raising puzzles that defy logic and do not fit the reality of what we have seen, read and heard about this trek, and in particular Museveni’s participation in the same.

If he in fact walked the seventy-five kilometres as reported last night (Monday), then the cameras should have captured him walking alone, having left everyone he started with several kilometres behind…as he would be the only human able to walk at that incredulous speed, way faster than the dozens of young and healthier people (some of them elite force soldiers) who are walking with him.

In mathematical terms, it would mean that he has walked twenty-five (25) kilometres per day which the news reports contradict, as highlighted above.

Both accounts cannot be true at the same time. One or both are telling lies or being inaccurate.

Moreover, the footage and still images show him stopping to interact with locals—meaning that our calculations require that we give him even more time (perhaps including night hours and assume that he doesn’t need rest) to cover the said distances since he loses significant time giving speeches, appreciating dancers and talking to veterans!

As far as we are aware, there have been no night walks. And if there were any, the time just wouldn’t be enough to satisfy our calculations above. Besides, night walking in the jungle is much slower due to limited visibility.

And even if he was using bionic legs (which he isn’t), they would surely have to be removed and charged at some point every day or so! What we have seen is pre-arranged encampments for the walkers to rest at dusk, before resuming the trekking the next day.

Now that primary school arithmetic has helped expose the barefaced lies behind this trek, let me request our friends in the media to help us answer two questions and then I’ll sign off:

1. In the NTV newscast, (where he narrated the battle in which his comrade-in-arms Elly Tumwine lost an eye), Museveni arrived at the venue being driven and is seen clearly emerging from the left passenger door of an SUV. Why did he need a vehicle to transport him to a venue which (ideally) is part of his walking itinerary? Where was he coming from? Did those who were walking with him see him walking continuously from the last stop to the venue at which he gave that address? Is the crowd he addressed at that venue the same crowd he started off with from his last stop? At what time did the walk towards the speech venue start and when did the trekkers arrive (if at all they did) to listen to the speech?

2. Exactly what is this trek about, especially seeing as the same news report stated that the mission had been changed to “political mobilization” which is a byword for campaigning—something that Jotham Taremwa, the Electoral Commission spokesperson, while justifying the arrest of Robert Kyagulanyi and Others accused the latter of doing—and said is illegal?!

From the above information, data and computations, it is self-evident that unless Museveni is using a serious cocktail of life-threatening steroids, banned performance enhancement drugs or has recently become superhuman, it is impossible for a body that is way over seventy (70+) years old, eating a strict regimen of kalo (millet bread), plantain, water and eshabwe—a fairly thick creamy sauce with a milk base in an environment of twenty-four (24) and twenty-six (26) degrees Celsius, weighing seventy-six (76) kilogrammes, in a fairly rugged terrain with uneven gradients, weighed down by dark coloured army fatigues to cover seventy-five (75) kilometres on foot in three (3) days!

The single question that I leave for you the reader to answer in your free time is this: if Mr. Museveni and his handlers can tell such naked lies about a mere walk, how much more are they lying to and stealing from us each passing day regarding the more serious matters of defence procurements, expenditures on foreign travel and the allocation of State House scholarships, for example?

MUHIMBISE GEORGE: Why Covid 19 was a blessing to the sharks.

In the wake of Covid 19 in the world, Ugandan public service and political elite displayed high level patriotism. Was...

There has been a lot of effort to develop Uganda’s financial markets but we still have an under developed market...

I have heard Dr Atek, the Covid Incident Manager, and the Minister, Dr Aceng, talking of now doubling our quarantine...

Prof. Waswa Balunywa: Does Coronavirus give Africa a New Lease of Life?

When that Coronavirus pandemic ends, we don’t know when, the world would have recorded many deaths of human beings and...

FARIDAH NAKAZIBWE: Men who say they cannot marry single mothers are the ones who defile innocent girls and deny pregnancy responsibility

Some men say they can never marry a lady who has had a child outside wedlock. They call them "Beenzi"...