We need an alternate debate on vaccination – Kabuleta to government

by Elisha Z. Bwanika
in Health
3 0 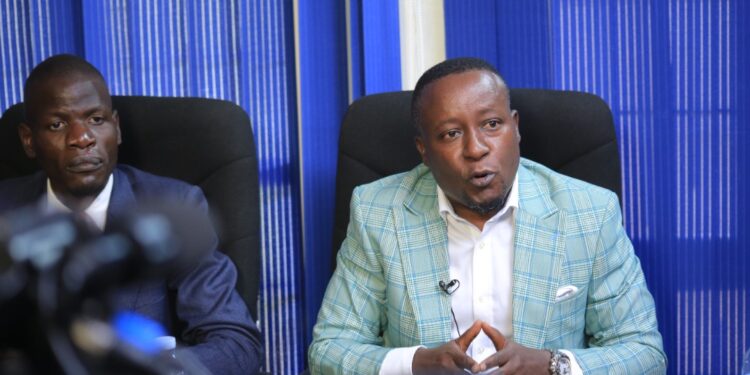 Ugandans who have suffered from adverse side effects caused by Covid-19 vaccines will now be able to document them in order to save others from falling into the same trap.

The announcement of the new platform, forcedvaccines.ug was made by activist  Joseph Kabuleta on Tuesday morning during a press conference by civil society activists in light of government’s failure to fully open up the country.

“The side effects of the vaccine are so bad that one would rather suffer from Covid-19 almost 100 times over,” Kabuleta, a former presidential candidate, said of the ongoing government campaign to have about 7 million Ugandans vaccinated against Covid-19 if the economy is to fully reopen.

“There are studies in Israel, one of the countries most affected by Coronavirus, which show that a person who has suffered  from Covid and got cured  has an immunity 27 times more effective than one who is double jabbed. You are part of a worldwide experiment but we are afraid of debate,” he added.

Uganda has so far received more than 5.6m doses of vaccines from foreign donors. This includes 1.64 million doses of the Pfizer vaccine and 647,000 doses of the Moderna product from the U.S. government.

In September, Dr Munir Safieldin, the Uncef representative in Uganda thanked the US government for their ‘generous donation’ of Moderna vaccines.

“This will greatly support the ongoing rollout of Uganda’s COVID-19 vaccination campaign and help us reach the set target by MoH by December 2021,” Dr Safieldin said then.

Resident District Commissioners of Soroti and Kwania have also since vowed not to serve any one who is not vaccinated, something Kabuleta termed ‘illegal.’

“Across the world, there are demonstrations  against forced vaccination using trial vaccines. Nobody should be denied their rights on the basis of their lack of vaccination,” he said.

“We need to start a debate (on forced vaccination). I know RDCs are going to say I am politicising this but I am not. This is something that is very important for Ugandans to know to that there are debates going on about vaccines. There are so many people who have been blocked out and the media is not reporting about this. I know there are many people who have suffered adverse side effects but we are quiet.”

“RDCs do not have the expertise to tell whether you are one of those people not supposed to get vaccinated and consequently there will be a violation of the rights of a person who has been denied a social service,” Dr Walyemera said, before calling for a an alternate debate.

“What is the alternate debate? We are no longer hearing about Covidex, or death rates but ‘vaccinate’. How practical is it to vaccinate when we failed on deliverly?” he asked.

President Museveni is due to address the country on Thursday with curfew and continued lockdown said to be high on the agenda.