“Let us promote value addition on Ugandan products rather than exporting raw materials”, says President Museveni as he commissions Coffee Factory in Ntungamo

While commissioning a new Coffee Processing Factory in Rwashamaire Town Council, Ntungamo district on Thursday, December 29, 2022, the President who was accompanied by the First Lady Mrs. Janet Kataaha Museveni sounded not happy with what he called the political actors who are fighting his idea of promoting value addition in the country starting with the coffee sector.

“I will not tolerate anybody who stands in my way of adding value to Ugandan coffee. When I bring an idea as Yoweri Museveni, I know what I’m doing and I will not allow anybody to divert me, unless you want problems,” Gen Museveni said, before sending a strong warning to some politicians who seem not to see his developmental idea.

“Leaders please, avoid politics in development. Let’s agree, if there’s something you have not understood, come and we sort it out quietly rather than making noise,” he added.

According to the Minister of Trade, Industry and Cooperatives, Hon Francis Mwebesa, the coffee processing facility by Aspire Africa Coffee is already adding value to coffee and in the pipeline, a range of over 20 coffee value addition products shall be produced in this park. He said all these are intended to make Uganda a private sector-led economy on the basis of cooperatives which are a strong power. 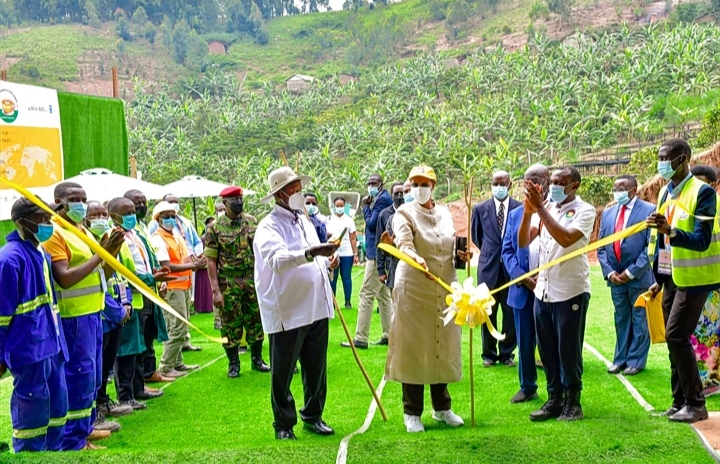 This according to the President, is part of the ways Uganda will achieve her economic and social transformation targets, a journey started way back in 1986 when the National Resistance Movement (NRM) government came into power.

Gen. Museveni said that the NRM government has been striving since 1986 to build an economy, which is independent, integrated and self-sufficient. He appealed to coffee stakeholders to join this government effort.

“Before we came to power; we wrote a 10-point program. Point No.5 was about building an economy, which is independent, integrated and self-sufficient. We have managed to attract investors and also empower our local people to do business,” H.E Museveni said, adding that those taking unprocessed coffee are not only depriving Uganda of its wealth but also thousands of jobs. 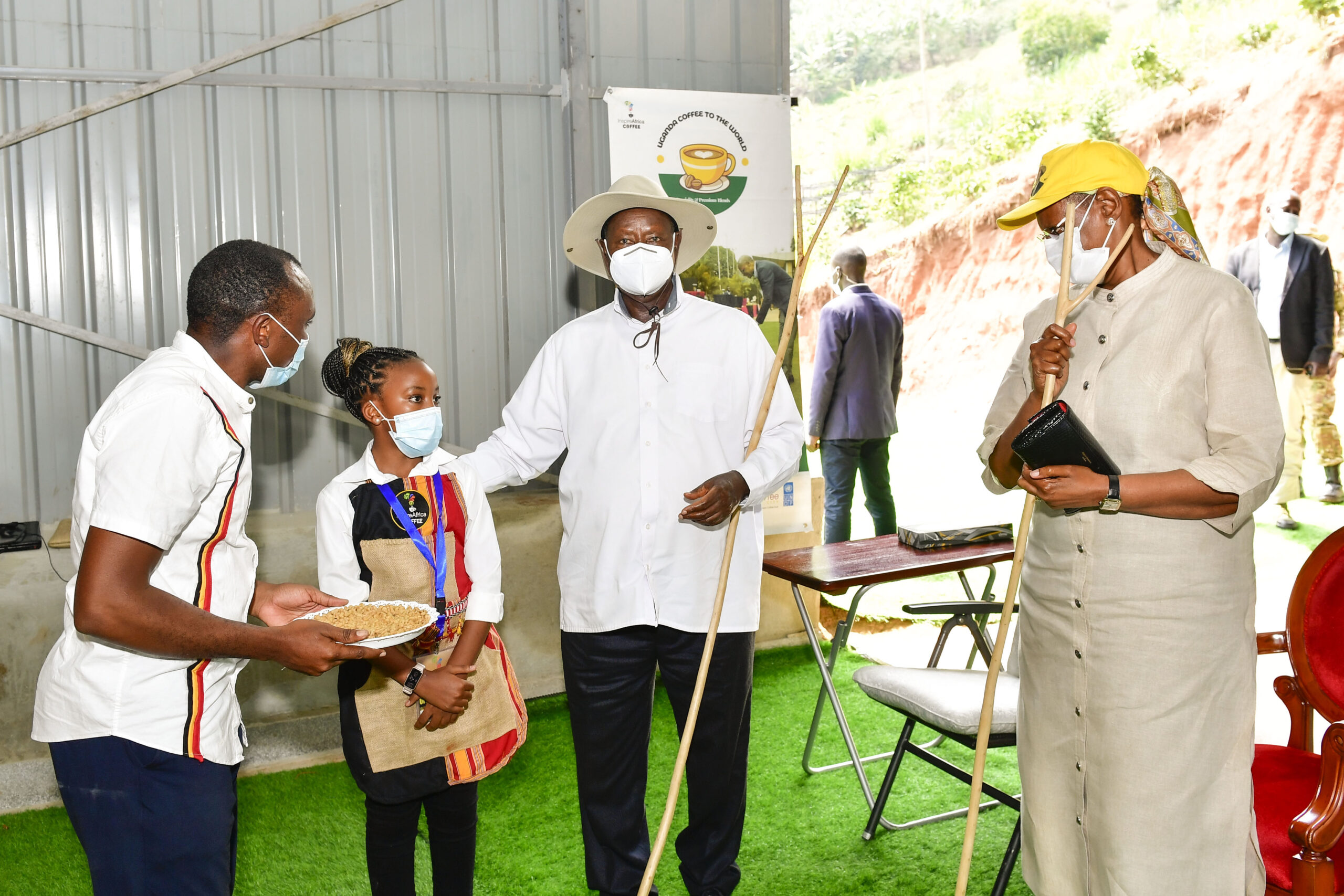 The Head of State also reminded the gathering that in 1996 he invited a special cabinet meeting in Masaka to discuss adding value to coffee and other products at that time including cotton and he was happy that the textile industry had begun yielding results.

President Museveni said there is no way Uganda and other African producing countries can fully benefit from their coffee when they are exporting it raw, adding that the only way for these countries is to develop a processing industry. He linked the continued export of raw materials from Africa to the new slavery and said he cannot support it.

He further cited the Shs12 billion Kawumu Tannery Facility he constructed in Luweero, which is now producing high quality leather for both export and local use.

“I constructed a tannery at kawumu to stop importing leather from China. So, don’t waste time. We have everything we need like raw materials, man power and the relevant infrastructure,” H.E Museveni said.

The First Lady also a born of Ntungamo district, Mrs. Janet Museveni thanked the people of Ntungamo and Mr. Nelson Tugume in particular for setting up such a state-of-the-art coffee factory in the region which is a step in the right direction to fight poverty (Obworo).

“We don’t belong to a lesser God. I think we need to get that into our thinking. Our God is the same God who has done miracles globally and the same can still happen to Uganda,” The First Lady said.

She commended the President for his poverty alleviation drive that began over 56 years ago when he was still a student.

The Chief Executive Officer for Inspire Africa Coffee, Mr. Nelson Tugume, drew his inspiration to open up a coffee processing factory from an Ethiopian coffee shop in the USA where he bought 250gms of Ugandan coffee at $79 dollars, which is approximately Uganda shillings 292,300.

Mr. Tugume commended the President for promoting value addition on coffee in order for Uganda to get what it deserves as one of the top coffee producing countries in the world. The global coffee industry is worth more than US$400 billion.

Mr Tugume informed the President that a total of 50 cooperatives have come together under Ankole-Rwenzori-Kigezi Coffee Investment Consortium Uganda (ARKCU) to promote value addition and determine their price on the global market, saying the people sitting behind the computers to determine the value of Ugandan coffee in UK and USA, none has ever owned one plant of coffee.

“Friends we should refuse that. We are not children of a lesser God and I believe Africa is the time for us to see and know that we are on a journey to transform our lives and society,” Mr Tugume said.

He also asked President Museveni to further support the coffee industrial hub, with stronger electricity and tarmac roads leading to the factory to which the President agreed to work on. 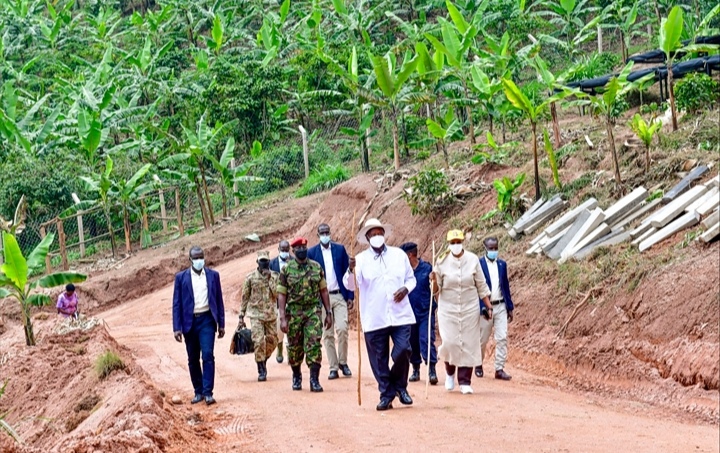 Professor Victor Murinde, a financial economist at SOAS university of London and the Director of the Center for Global Finance said the opening of the coffee processing hub in Ntungamo is one way of contributing to the transition of Uganda from low income to middle income and a way of recovering from the multiple shocks that the world economy has gone through.

“It has been emphasized before that coffee is the most sought out commodity. The global population today stands at 98 billion people of which 30 to 40% of those consume coffee every day 65% of these in America. So basically, this is a fundamental change that is going to propel Uganda into a global economy,” Prof Victor said.

On engaging global investors, Prof Victor informed the President that he has reached out to one Sarah Taylor of invest Africa who is committed to invest 60 billion pounds in coffee in Africa (Uganda inclusive) every year.

Uganda is the top coffee exporting country in Africa and its total coffee production represents about five per cent of the global production.

President Museveni and policy experts are convinced that the country could earn more money by processing all its coffee and either consuming it locally or selling processed coffee to the international market.

The President commended Mr. Tugume for supporting his value addition efforts and promised him all the support to realise his objectives.

“We shall support you. What is more important is to start,” H.E Museveni said.

On the other hand, Trade Minister,  Hon. Mwebesa commended Mr. Tugume for the passion he has for coffee and implored the President to utilize his expertise more.

“This young man should be appointed your Special Envoy on coffee because of his expressed passion and commitment to serve his country. He has marketed Ugandan coffee to the world and possibly this could be the right moment,” Minister Mwebesa said.

Mr. Odrek Rwabwogo, a Senior Presidential Advisor on Special Duties and chairperson of the Presidential Advisory Committee on Exports and Industrial Development (PACEID)  said Uganda needs to borrow a leaf from Brazil that has invested so much in research, equipment, fertilizer application and empowering farmers.

The Ntungamo District LC.5 Chairperson, Mr. Samuel Mucunguzi Rwakigoba said the district has the best quality agricultural products like coffee, banana and milk, and expressed the need to have Agro-Tourism in Ntungamo “to showcase what we can do”.

Others were; Coffee farmers from the region, Ntungamo-Kampala business community, the Permanent Secretary Ministry of Local Government Ben Kumumamanya, the district leadership of Ntungamo, RDCS, religious and opinion leaders.