The Minister for Presidency Hon. Babirye Milly Babalanda has praised the government of Uganda and its AIDS Development Partners for their significant roles in the fight against HIV/AIDS in Uganda.

The Minister said Uganda has made exceptional progress in the fight against HIV/AIDS and globally the East African country is considered a success story in this particular area.

Hon. Babalanda made the remarks on Wednesday 6th July, 2022 during the HIV/AIDS Behaviour change campaign in Kalangala District. The event, organised by Buganda Kingdom in partnership with UNAIDS, the government of Uganda through Uganda AIDS Commision, was aimed at accelerating the fight against scourge in Island District.

“This is largely attributed to NRM government’s efforts under the leadership of our President;His Excellency Yoweri Kaguta Museveni who has consistently reminded all Ugandans to stay away from HIV/AIDS through, especially the ABC strategy,” Hon. Babalanda asserted.

“While other leaders were in denial when AIDS was first discovered in Africa, our President accepted that we had a problem and developed strategies to defeat HIV and AIDS. One of those strategies was a multi-sectoral response to fight HIV and AIDS, coordinated under Uganda AIDS Commission which is located under The Office of the President. Through this arrangement, different leaders and representatives of stakeholder groups are able to make contribution..The multi-sectoral approach to fighting HIV and AIDS has contributed significantly to reducing the HIV burden as demonstrated by reduction in number of new infections and AIDS related deaths”she added. 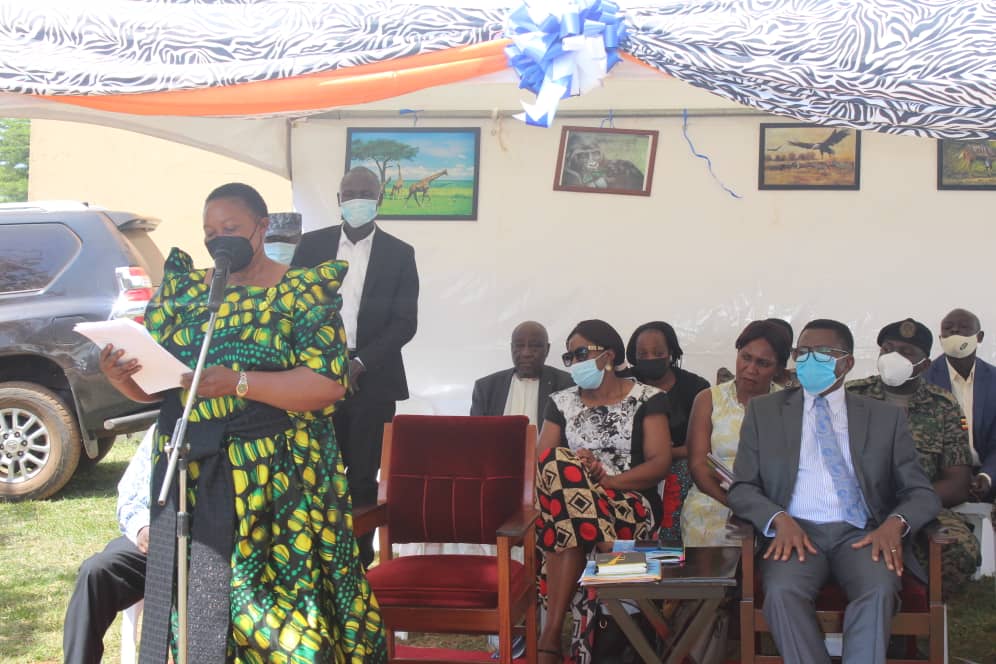 The Minister also lauded the Kabaka of Buganda Kingdom for being an outstanding and consistent leader in his efforts to contribute to the fight against HIV/AIDS.

“Buganda Kingdom, in which Kalangala district falls, is one of the largest cultural institutions in Uganda. Buganda Kingdom has a population of over 10 million people. The Kabaka of Buganda is passionate about fighting HIV and he is very influential. That is why his efforts have been recognized by the UNAIDS which made him a Goodwill Ambassador targeting men in Africa.bAs we move towards ending AIDS as a public health threat by 2030, we would like to harness the influence and power of the Cultural leaders like the Kabaka of Buganda.”

“However, much as we have made progress, HIV infections remain unacceptably high and gendered with females shouldering a higher HIV burden compared to males. Additionally,while HIV prevalence varies across the country, it is highest among certain vulnerable populations such as fishing communities in Kalangala at 18%. This HIV prevalence is three times the national HIV prevalence which is 6.2%.”

Mrs Babalanda also urged the Kingdom of Buganda to largely involve men in the campaign if Uganda is to win over the public health threat by year 2030.

“Reaching men is now more important than ever. Men listen to leaders like the Kabaka and heed to his advice. We therefore implore the kingdom to use every opportunity where the Kabaka is addressing men to integrate HIV prevention messages in his speeches. Buganda Kingdom is well organized with functional structures for reaching the last person in the household with messages and enjoys wide coverage with Media such as CBS Emanduso which covers the entire Buganda region. We request that you integrate HIV prevention messages in the media messages to the households.”she further commented.

“Buganda Kingdom also has a well-known Masaza Cup which attracts men. Much as this is an entertaining event, we should use these events to target men with messages on HIV prevention and also use these opportunities to address structural barriers such as Gender Based Violence since it is a risk factor in HIV infections.”

The Minister also beseeched other cultural institutions to emulate Buganda and promote this kind of campaign especially among the fishing communities and on islands located in their regions. She revealed that the Kyabazinga of Busoga and the Omukama Oyo NyimbaIguru have already made excellent efforts and “they need to be thanked for the good results so far”.

“Let us also embrace Government Poverty Alleviation Programs such as the Parish Development Model. This is because Poverty is an underlying factor in HIV infections. This will help to empower people economically and reduce transactional sex which is a driver of HIV infection among adolescent girls and young women.,she added.

On his part,the Katikkiro of Buganda Owek. Charles Peter Mayiga affirmed that Buganda kingdom under the leadership of Kabaka Ronald Muwenda Mutebi II, who is regarded as an Ambassador for HIV/AIDS fight in Uganda, is ready to build strong partnerships to ensure that the deadly disease is driven out of Kalangala district.

“Religious leaders, people trust you. Sensitize men to take part in the fight against HIV. Men are cowards, you pretend to go fishing, will you fish when your killed by HIV? Women are stronger than them, that’s why they find it easy to go for HIV/AIDS testing. I don’t want to hear again men beating their wives because they have gone to health centres to know their status,” the Katikkiro warned.

“You should instead be supportive. If results come out positive especially for expectant mothers please support them so that they produce HIV negative babies.”

Katikkiro Mayiga also urged Kalangala residents to abstain from sex if possible and if need be, they should always use protection to safeguard their lives.

“Despite the health challenges faced by the people of Ssese, Medicines for HIV are there at health facilities. Please if your are sick take your medication.Follow doctors’ precautions, you will stay alive.”

“After Buganda, we should go elsewhere,” he said.