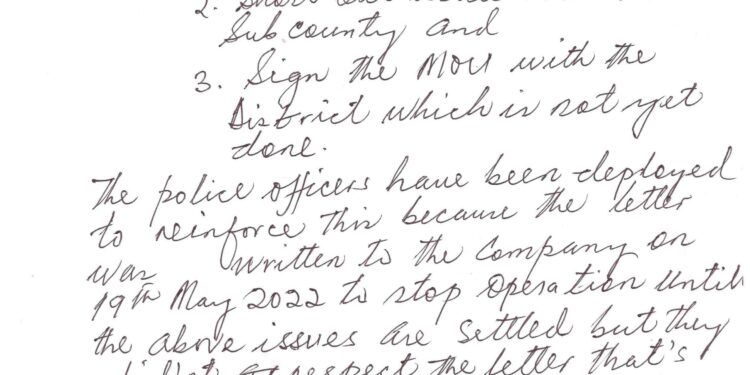 Fearless Obwoya Oyat is accused of illegaly shutting down the Chinese owned quarry site on claims that the district didn’t have a memorandum of understanding (MOU) with the company.

Through their lawyers, Yiga Advocates, the Chinese Railway 18th Bureau Group in a letter of intent to sue dated Wednesday, 8th June 2022, said the  chairperson illegally shutting down their site over unclear circumstances.

The lawyers added that, a letter was written to their clients through the office of the Chief Administrative Officer dated 19th May 2022 demanding that their client commits to paying several billions which is not justified.

Yiga Advocates in their letter stated that the district chairperson refused to avail their clients of the purported MOU and resorted to threats of shutting them down if they do not sign the same. The advocates accused the district of denying providing a drafted MOU to their client and stated that the letter dated May 19th, 2022 was duly responded to by a letter from their office dated 23rd May 2022 – with a request that Obwoya avails the draft MOU and its legal basis but, no response was ever received to date.

“By serving the intention to sue letter, our client has instructed that you avail us with the claimants and the claims they have against our client as alleged, the issues between our clients and the Sub County, all the legal basis for these issues, the draft Memorandum of Understanding and the legal basis upon which the billions that you seek therein are grounded to have the district’s concerns addressed,” part of the letter states.

Yiga Advocates further directed in their letter that the district chairperson must avail them of these documents as soon as possible.

They added that forcing their clients to pay money for which there is no legal basis is duress and extortion and advised the district chairperson to refrain from using his office to reach this perilous end.

However, Obwoya has since defended his letter dated 6th June 2022 addressed to the China Railway Company urging them to close, saying that what he did was right since the district council backed him up. Obwoya added the China Railway Company began work in the district without signing MOU, and that they cannot continue unless the MOU is signed before the company can operate in the area.

Obwoya claims that the China Railway Company is sitting on over 20 hectares of land covering natural resources such as hills and rocks, among others, that the district should use to get revenues. He added that he closed the site forcefully upon deaf ears provided by the company following a series of warnings sent to them.

Average Turn Up In Kaabong As UPDF Kicks Off Recruitment Exercise