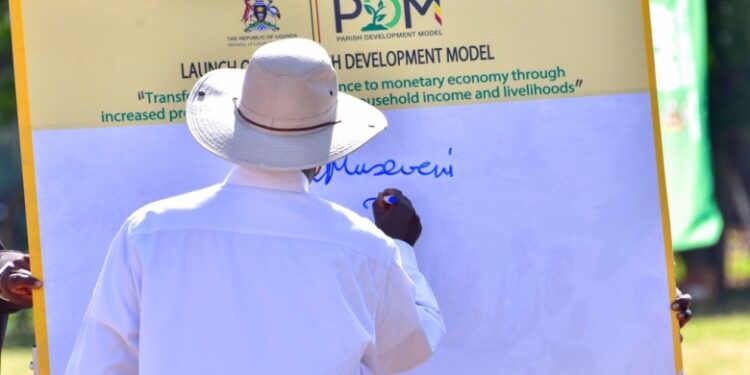 President Yoweri Museveni during the launch of PDM

Members of Parliament have expressed fear that government’s flag ship programme, the Parish Development Model (PDM) is likely to fail because most parishes are not yet prepared.

MPs said that although the programme is inclined towards agricultural production and marketing, many parishes lack key infrastructure like roads, water and electricity to support it.

The legislators raised their fears a training seminar for Members of Parliament at Imperial Royale Hotel on Thursday, 16 June 2022.

Rakai District Woman MP, Hon. Juliet Kinyamatama said her constituents are likely to ‘eat’ the funds since some of her parishes lack water to engage in agriculture and roads to transport produce to the markets.
“Why do you want to give out money before we have roads and water? For us in Rakai, if you give us that money, we shall eat it because we do not have the facilities to support PDM,” said Kinyamatama.

Members were also dismayed that there is no strategy in the policy guidelines for government to ensure security of the enterprises that will benefit from the revolving fund worth shs100 million ring-fenced for each parish in the 2022/2023 financial year.

“These enterprises we are talking about, are they insured? What happens if a farmer buys inputs and they dry; where is the security of this money we are giving out? Hon. Rosemary Nyakikongoro (NRM, Sheema District) said.

Legislators noted that there was confusion among citizens on PDM that calls for more time for sensitization before implementation.

The Northern Region Youth MP, Hon. Henry Okot cited a recent press conference by the National Youth Council rejecting the implementation of PDM over the changes in the percentage of funds initially allocated to the youths.
“The initial guidelines from Ministry of Gender stated that 30 per cent will be for youths, but now these guidelines say 30 per cent of the youth who are members of the enterprises; this is a significant shift from what we had. The position of the Youth Council now is that if you are giving us 30 per cent of the enterprise, then return the Youth Livelihood Fund” Okot said.

Legislators were concerned on learning that programme beneficiaries will be required to form enterprises yet there are groups that have existed for long in communities created under other government livelihood programmes which would have been incorporated into the beneficiary groups under the PDM.
“The groups that have been in existence should have a linkage with the new groups that will be supported during PDM. Many were formed, they have had historical experiences that would inform the programme,” said Hon. Emmanuel Ongiertho (FDC, Jonam County).

The Minister for Local Government, Hon. Raphael Magyezi reiterated that government is at the rollout stage of the PDM and articulated a plan to sensitize the population.

“For the next 10 days, we shall be doing intensive sensitization. We shall have meetings at district level, in communities and also hold radio talk shows,” Magyezi said.

“Let us go with an open mind; we are going to communities next week. We shall find out, if there is something that requires to be changed it will be changed,” Rusoke said.