by Mubiru Ivan
in National, News
20 1 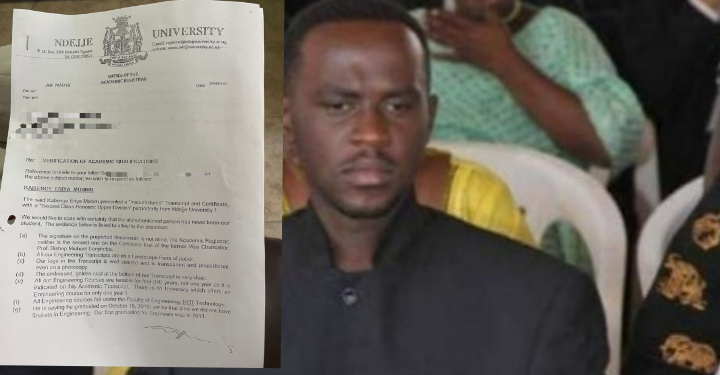 Since last week, controversial local businessman Eriya Mubiru has been in the news following his arrest in Dubai, United Arab Emirates (UAE).

Mubiru was arrested after extorting Shs2 billion from a UAE businessman. He is still under detention pending investigations into fraud allegations.

Mubiru known for obtaining mega contracts from the Ministry of Defense, was in 2017 put on spot over shoddy works and inflating the Kaweweta Recruit Training School (KRTS) procurement deal to a tune of Shs76 Billion. The same was investigated by a committee instituted by President Yoweri Museveni which cited fraudulent procurement methods and tax evasion by Mr. Mubiru’s companies – J2E Investment Corporation and Roester Construction Corporation.

He was using fake academic documents to claim that he was a qualified Engineer and he used them as one of the prerequisite requirements to get juicy contracts from the Ministry of Defense. 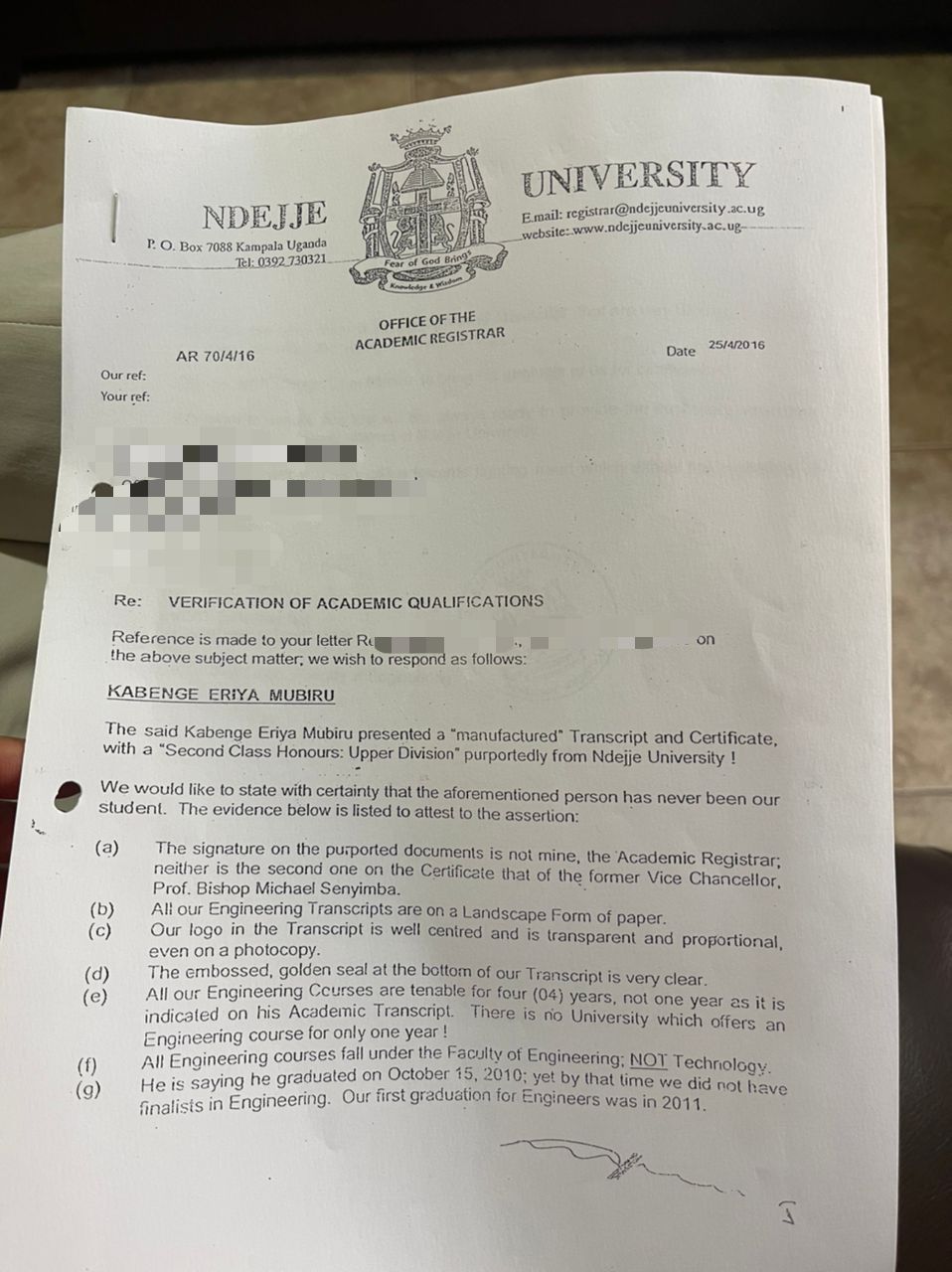 “We would like to state with certainty that the aforementioned person has never been our student….The signature on the purported document is not mine, the Academic Registrar; neither is the second one on the certificate that of the former Vice Chancellor Prof Bishop Michael Senyimba,” said B.M Sekabembe, the Ndejje University Academic Registrar in a letter copied to the Dean, Faculty of Engineering.

“All our Engineering Transcripts are on a landscape form of paper. Our logo in the transcript is well centered and is transparent and proportional, even on photocopy.”

Mr Sekabembe added that all their engineering courses are tenable for four years, not one year as it is indicated on Mubiru’s academic transcript.

“There’s no University which offers an engineering course for one year. All engineering courses fall under the faculty of engineering not technology. He is saying he graduated on October 15, 2010, yet by that time we did not have finalists in Engineering. Our first graduation for engineers was in 2011,” he further stated.

“There are other features on the purported transcript that are very different from our very own; therefore the document is fake.” 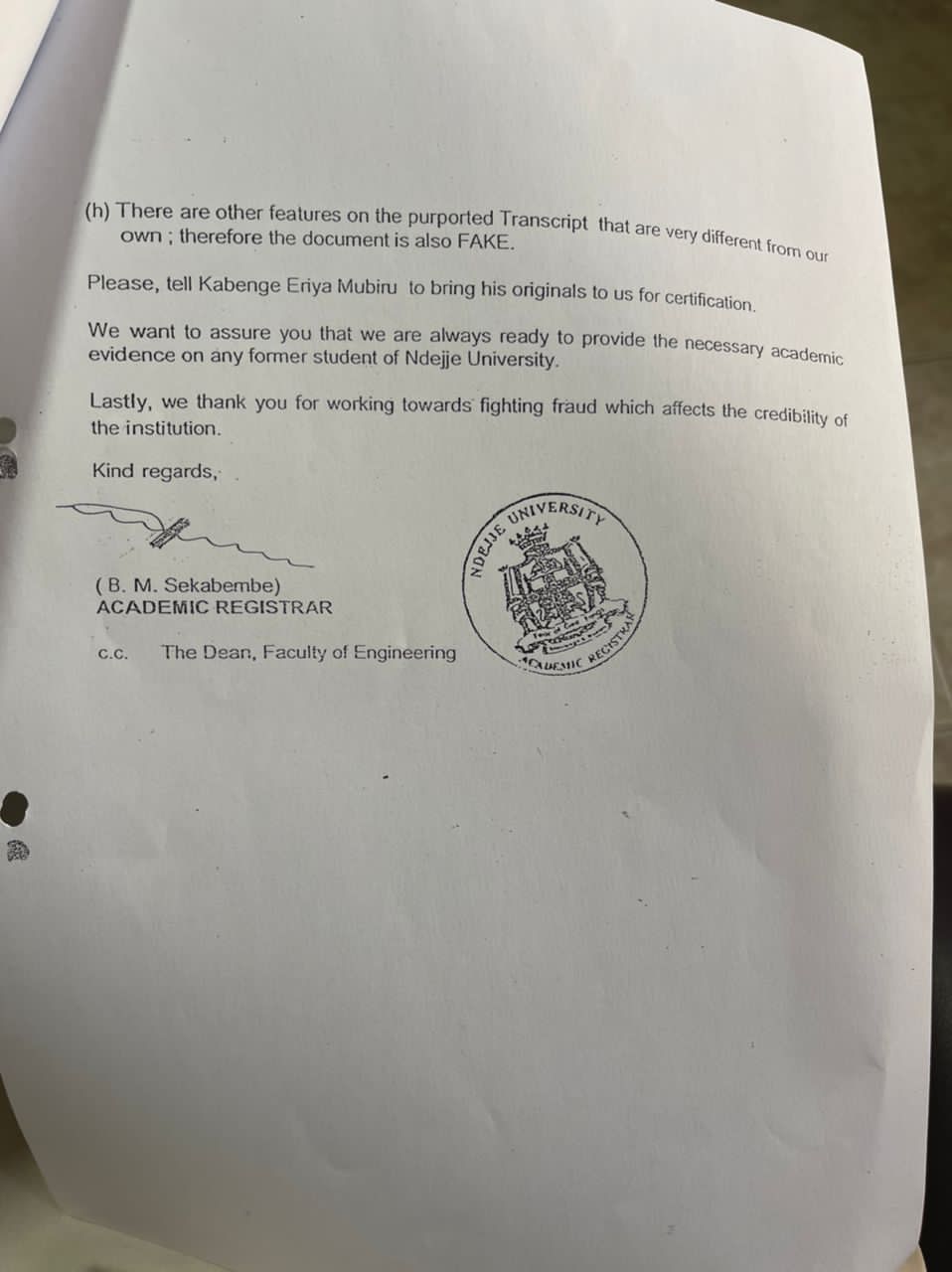 In 2020,the Ministry of Defence’s administrative review committee was set up to look into the findings by an earlier investigation against Mubiru’s and his companies, led by the then Deputy Chief of Defence Forces, Lt Gen Charles Angina.

Gen Angina had found that Mubiru’s companies had been awarded five contracts for construction works of the Kaweweta Recruit Training School through either fraudulent bidding processes or without any procurement procedure at all, and had presented fake profiles of employees to win the contracts.

The report also reaffirmed that Mr Mubiru himself had claimed he was a qualified engineer whereas not.

Gen Angina further found that Mr Mubiru’s companies had forged books of accounts, evaded taxes and had failed to execute the works paid for. Phases I, II and III of the works at the training school had not been completed, several years after the contracts had been awarded yet Mubiru had been paid most of the contract money.

Gen Angina wondered how the same company would be awarded another phase of the works before completing the previous one, and pointed out that much of the work that had been done was shoddy.

This led Mr Mubiru to flee the country and only returned once when several high serving UPDF officers begged President Museveni to forgive him.

He has been cited in many controversial land deals such as his involvement in the grabbing of Kajjansi Forest Reserve which was recently brought to the attention of State Minister for Lands Honorable Sam Mayanja who directed the State House Anti Corruption Unit to investigate the same.

A few days ago, another unsuspecting Ugandan identified as Ibrahim Kaweesi also came out to accuse Mubiru of defrauding him cash amounting to Shs250m million in fake Japan deal.

“By that time (2008) I was a businessman dealing in rice and also had transportation vehicles (two elfs and a fuso) which used to transport my rice consignments from Busoga… .In 2008, I met, a man called Eriya Kabenge who calls himself Eriya Mubiru, we met at one of the car bonds in Industrial Area. He was purchasing a black BMW 325 whereas I was buying a Pajero Short V8. When I saw him, I got inspired because he was a young man like me who looked to be well off financially. I asked him what he does. He told me he was a businessman who stays in Japan with his Japanese wife. I picked interest in his engagement because I had always wanted to work from Japan. He assured me that I could join him in Japan as long as I invested in money,” Kaweesi recalled.

“I told him I had a residential house in Kanyanya which I was willing to sell and that I was also ready to sell my cars. After getting the cash from the assets, I would approach my family and ask them to top up the remaining balance so that I can go and work. I had a plan that after making it big it Japan, I would ensure that I replace my sold properties in Uganda.When I told him to look for a buyer for my house, he brought his sister called Catherine who bought the house. I handed him the money from there so that he can work on my travel process. I sold all my assets and gave him money. Even one time he gave me his newly bought BMW to use in a mean time because I was left with nothing to be used in my movements.”

Kaweesi revealed that his mother also had a commercial house in Manyangwa Gayaza which she sold so that they could raise all the required money (Shs250m).

“He had told me that while in Japan, we shall be dealing in car importation,” the businessman who now works and lives in Dar es Saalam, Tanzania added.

“After a while, he started tossing me around without giving me any feedback regarding our plans and this is where he decided to bring in his brother Kabenge Jordan (usually calls himself Sheikh) who went to Nasser Road, forged South Korea visas (for me and Jordan) without me knowing that they were fake…. We managed to pass through Entebbe International Airport with our fake visas and fake US dollars.”

When they landed at Seoul Airport in South Korea aboard Emirates Airlines, Kaweesi noted that they were suddenly arrested with their fake visas and detained for week before being deported to Entebbe.

“When we returned, Mubiru cut off the communication and when I managed to get in contact with him, he decided to threaten me saying he has big people in government who can deal with me.”