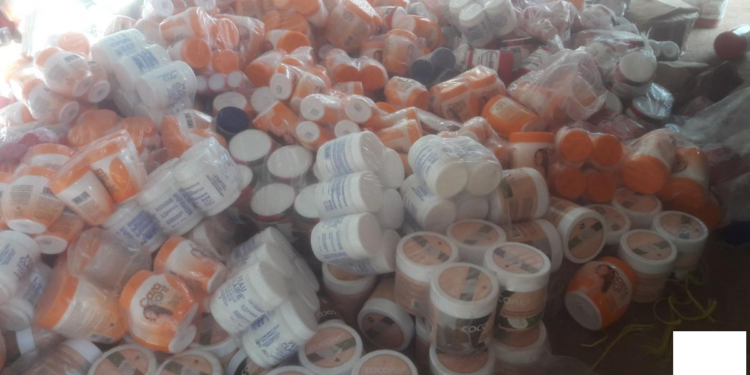 Some of the impounded cosmetics

Uganda Revenue Authority-URA has recovered Shillings 79 billion from contraband goods impounded on their way to the country.

Julius Nkwasile Mponoka, the Assistant Commissioner in charge of enforcement at URA, says that the commodities were impounded in June 2022 under their operation dubbed “Zabike”.

He explained that the tax body has so far made 5,000 seizures since this year began, adding that the most smuggled items include textile fabrics, garments, cosmetics, and rice. Nkwasile explained that the majority of impounded items are substandard and not certified by the Uganda National Bureau of Standards-UNBS yet they find their way into the country without paying taxes.

He revealed that the items are mainly sourced from within east Africa. To substitute importation, the government instituted a 60 percent import duty on imported rice and a 35% import duty or 3 USD per kilo of textile fabrics and garments.

Whereas cosmetics is a 100 percent import duty. This is prohibited with the aim of boosting the purchase of locally produced commodities. Nkwasile says that the tax body has registered an increase in smuggling but hastened to add that they are ready to deal with the vice.

About most of these goods being smuggled from fellow east African countries, Nkwasile says that modalities have been worked on to close loopholes that let such happen and many other measures are to come.

“We are working with our colleagues from the region to collectively solve this problem, though a lot is still at stake, especially for members who are not fully part of the East African Community bloc,” he explained.

To put an end to this practice, several measures such as prosecution, backward investigations as well as arrests have been put in place. Nkwasile However, notes that these efforts have not yielded much in pulling down the vice but they are fighting on.

Records from URA indicate that the tax body has intercepted over 50 cargo trucks/consignments under various clearance regimes from the Eastern, Western, and Central regions. The exhibited commodities include a Subaru F – Reg: UBJ855J Chassis: NZEI419000487 with a forged number plate.