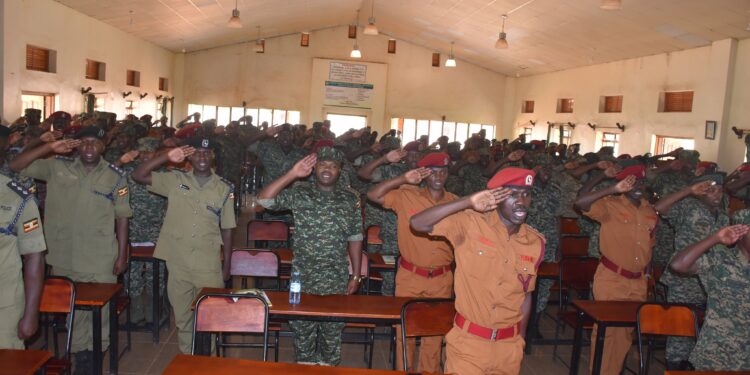 In his elaborate lecture of opportunity to the graduands, Lt Gen Elwelu implored the graduands to work hard and reach their destiny, adding that failure to reach destinies has failed many African states.

“It is a total disgrace for an Officer or General to retire in a prison facility. As we retire, we don’t want young people to commit some of the mistakes we have made as individuals or institutions,” he cautioned.

He elaborated that sin has caused the degeneration of human character; thus the existence of evils like impunity, corruption and hatred.

The D/CDF cautioned graduands to always be guided by God as they execute all their works. He gave an example of himself that Saturday (Sabbath) is his day for worship and fasting.

He added that without love for our neighbours we can’t claim to know or love God and the anti-Christ way of conducting our lives is the cause of selfishness. “Let’s remove the selfishness and focus on the common good,” he emphasized.

He concluded by warning graduands not to be over ambitious but accept what they have and wait for their right time, else they will all end up in sin.

“Let’s work hard and ensure that our institutions don’t collapse through sin. Uganda has the best National Anthem in the world. It is a prayer for our daily use,” he marvelled.

Gen Elwelu congratulated the newly passed out student officers upon completion of the course and thanked the leadership of the sister security agencies for their concerted effort in influencing society.

“What is important is not what we have learnt here but what we do out there – you will be known by your fruits,” he cautioned.

He further encouraged graduands to live responsibly and take care of their lives as they serve their country, Uganda. “The country is in our hands not in the hands of anybody else, it is all about us,” he reiterated.

“Plans are underway to conduct joint training of militants from all sister security agencies on top of the UPDF, UPF and UPS”, he noted.

He pointed out that Internal Security Organisation (ISO) will soon send its pioneer cohort of over 280 pre-deployment and Ideological Orientation Course and 10 operatives for Joint BCDC and psychosocial training; all meant to enhance interoperability between security agencies.

He highlighted that the country faces an increased demand for ideological orientation training since it has been realised that a critical mass can be created through mind-set change; and the National Leadership Institute (NALI) Kyankwanzi is already overwhelmed.

Col Rukundo, encouraged graduands to practice what they have learnt to cause the desired change for the realisation of Vision 2040.

Addressing the student officers, the Deputy Chief Political Commissar Col Nelson Aheebwa commended the UPDF leadership for supporting the joint ideological course to form an ideological synergy that will position our country towards socio-economic transformation.

He pointed out that these joint efforts engender a common view and cohesion in solving problems that face society and noted that patriotism programs shall be soon incorporated into the school calendar.

The course involved both theory and practical lessons including a study tour to the Presidential Demonstration Farm, Kawumu and Namunkekeera Industrial Park, Kapeeka War Memorial site and Kapeeka Prison.

The pass out was also attended by the Uganda Police Acting Director Political Commissariat, ACP Hillary Kulayigye, Director Human Resource at UPS David Ahimbisibwe, and UPDF Senior and Junior Officers, among other guests.