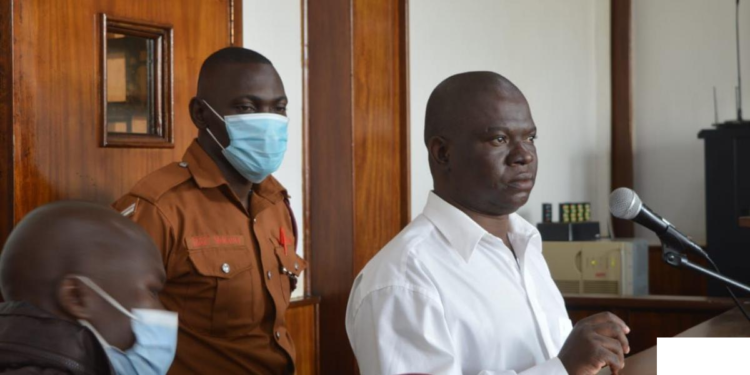 MP Ssegirinya in court on Thursday

The trial of jailed Kawempe North Member of Parliament Muhammad Ssegirinya who is facing charges of inciting violence has for the fourth time failed to resume before the Buganda Road Magistrates Court.

On Thursday, the Court Presided over by Grade One Magistrate Siena Owomugisha adjourned the case to June 30th 2022 for further hearing after being informed that Ssegirinya’s lawyer Shamim Malende was still unwell.

Ssegirinya also known as Mr Update is being accused of having reportedly posted a statement on his Facebook page named as “Ssegirinya Muhammad Fans Page” calculated to incite the public to participate in violence against a section or group of people.

The Prosecution quotes Ssegirinya to have posted “Iam warning those who are trying to assassinate Hon Robert Kyagulanyi Ssentamu that what will happen will be forty times worse than the 1994 Rwandan Genocide”.

It is estimated that about one million people were slaughtered in ethnic cleansing in 100 days of the genocide in question.

On their part, the Prosecution led by Ivan Kyazze said he had summoned two witnesses who are all police officers and that they were on the way coming. But after being informed about Malende’s sickness, Kyazze said he communicated to them not to proceed to Court. The Magistrate was left with no choice but to adjourn the case.

This is the fourth time that Ssegirinya’s trial is not taking place. Earlier on March 22 2022 , the case was scheduled for hearing to resume but on that day Malende told Court that she was not ready to proceed because; the Opposition which she subscribes as Kampala District Woman Member of Parliament on National Unity Platform ticket , was in the preparations to look for a Candidate to participate in a race to replace the former Speaker of Parliament Jacob Oulanyah.

The case was then adjourned to April 28th, 2022 . But on that day, the prosecutors were attending the fallen State Attorney Joan Namazzi Kagezi’s Memorial Lecture and neither did Ssegirinya’s lawyers turn up in Court.

The Case was adjourned to May 12th 2022 but on that day, Court heard that Malende was sick and she sent some lawyers to seek adjournment. The Court directed her together with Sseggona to turn up today but they have also failed to turn up.

Ssegirinya was granted bail on these charges of inciting violence.

However, prior to his arraignment before Buganda Road Court, he had been arrested on September 7th 2021 by police in Masaka District together with Makindye West Member of Parliament Allan Ssewanyana and accordingly sent to Kigo prison on charges related to terrorism, aiding and abetting terrorism, murder and attempted murder.

These charges stem from their alleged involvement in the Greater Masaka Region machete killings which claimed more than 20 lives of people between July and September 2021.

The duo has since been denied bail by the High Court on these capital offenses and todate, they are still at Kigo Prison.