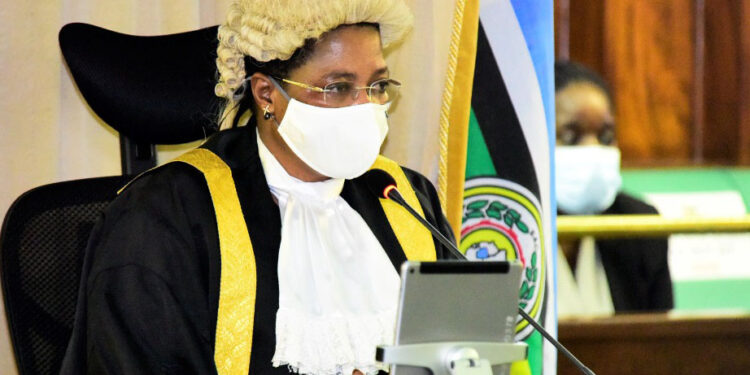 Speaker of Parliament Anita Among

Speaker Anita Among has directed the ministers of land and finance to present an action report in two months on recommendations by the Committee on Physical Infrastructure on a petition by Kasoli Tenants SACCO on the Kasoli Housing Project.

The petition noted that Kasoli Tenants SACCO signed an MOU with dfcu Bank and UN Habitat for loan facility of US$1 million to establish the housing project that sought to constrict 250 low cost houses for tenants in Tororo Municipality.

It was presented to the House by Hon. Sarah Opendi (NRM, Tororo District Woman MP) on 05 October 2021.

“There is already an advert on the land and people are going to be chased away. The lands ministry and finance ministry need to take immediate action so as to save these people and the land,” Among said.

The petition further adds that in the course of implementing the housing project, the SACCO was notified that the land allocated to it was in the path of the Standard Gauge Railway (SGR), and thus would have to be vacated upon compensation.

The petition cites that loan to the SACCO has currently grown to US$3.186 million, which has caused dfcu Bank to commence a foreclosure process due to failure to pay the loan.

The petitioners, however, prayed that the eviction be stayed until the SACCO has been compensated by SGR project.

Chairperson of the Committee on Physical Infrastructure, Hon. David Karubanga, presented a report on the petition to the House, on Thursday, 19 May 2022.

The committee observed that the lands ministry committed itself to pay the outstanding loan with dfcu Bank.

“However, on 28 April 2022 Bemug Auctioneers and Court Bailiffs placed an advert for sale of the same, implying that government will have to pay the new owners and at a higher value,” reads the report.

It recommended that government should prioritise the clearance of the outstanding mortgage with dfcu Bank and repossess the land title to avoid accumulation of interest.

It also recommended that government should halt the sale of the property by the auctioneer since SGR has commenced the compensation of beneficiaries in Tororo district.

“The SGR should be provided with Shs4.23 billion to cover the verified project affected persons as per its valuation report,” Karubanga said.

The report also recommended that Shs3.27 billion for mortgaged land of 9.318 acres as valued by SGR and approved by the Government Chief Valuer, should only be paid to the lands ministry for land acquisition if government is to replicate the project elsewhere.

However, Hon. Ronald Balimwezo, the Shadow Minister of Lands and Housing and also Nakawa Division East MP, presented a minority report to the House on the petition, citing dissentions from the main report like failure to scrutinise the titles of the land in question.

He observed that the Uganda Land Commission acquired a leasehold title from Tororo Town Council – volume 597, folio 25 and instrument No: 113479 that measured 10 acres; yet Ministry of Lands presented to the committee another title – FRV 1289, Folio 8, which was subdivided and mortgaged to DFCU Bank by Uganda Land Commission.

“You cannot subdivide a leasehold title and get a freehold title. It is not within our laws to create two land tenure systems running concurrently on the same piece of land,” Balimwezo said.

The minority report recommended that a forensic audit to establish the original title is done urgently, to ensure security of government land on which Kasoli Housing Project is situated.

It also recommended urgent scrutiny to establish the legalities surrounding the mortgage arrangement given by dfcu Bank.

Balimwezo suggested that SGR should use the remaining land and realign its project to save the 92 model houses already constructed under the Kasoli project.

He also urged that SGR purchases more land adjacent to the project area that would be cost effective and ‘save tax payers’ money.

“Going by the majority report, government will spend over Shs7.5 billion in compensation for houses to be demolished. If we purchase land to realign the SGR considering that one acre of land is currently at Shs40 million, 10 acres will cost Shs400 million. We shall save Shs7.1 billion and the 92 low cost houses,” Balimwezo noted.

The Third Deputy Prime Minister and Minister without Portfolio, Rukia Nakadama, said the recommendations from the committee reports will be studied by government, action taken and a report given to Parliament thereafter.