Opposition MPs to France: Why are you silent on Uganda’s human rights situation?

by Mourice Muhoozi
in News, Politics
8 0 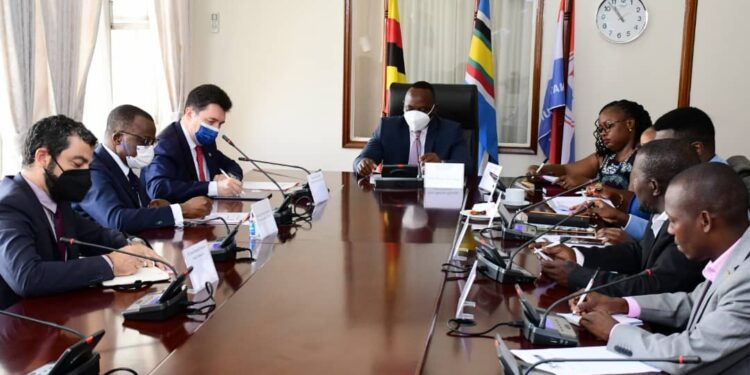 Uganda's opposition MPs in a meeting with French delegation

Members of Parliament from Uganda’s opposition side have faulted the French government for turning a blind eye on government’s gross human rights violations.

The legislators expressed their dissatisfaction with the French government on Monday, during a meeting between the Leader of the Opposition in Parliament (LOP) Mathias Mpuuga, and a delegation of French diplomats.

During the discussions, a French Senator offered a platform to Opposition MPs, to accuse the French government of maintaining a muted response, on human rights violations in Uganda.

The French Embassy in Kampala requested for the meeting that the visiting French Senator, Olivier Cadic, said was intended to promote economic diplomacy between France and Uganda.

Senator Cadic was flanked by the French Ambassador to Uganda, Jules Armand Aniambossou and his deputy, Jean Francois Hasperue.

But far from their interests, the French delegation found themselves being pushed to the defensive as the MPs questioned their involvement in the exploration of Uganda’s oil and gas resources, but at the same time maintained a muted response to the country’s governance and human rights abuses.

“We have had a lot of commentary from Europe on what is going on in Uganda, but we are yet to pick the views of our French partners on matters regarding human rights, and how the French people think of what we regard as blatant abuse of human rights in this country, because you are our strategic partners,” LOP Mpuuga complained.

Shadow Minister of Foreign Affairs, also Kyadondo East MP, Muwada Nkunyingi wondered why France has for long been silent on cases of gruesome torture, suffocation of fundamental freedoms, and other human rights abuses, yet it has in the past intervened on similar grounds in other countries.

“We have seen France coming out strongly in other jurisdictions to condemn attacks on political and human rights activists, why is France silent when it comes to Uganda? Is it because of your economic interests? Is it because of the oil? you have to be mindful that this oil belongs to the people of Uganda, whether you are a French company or an entity with economic interests… when you talk about what you saw in other countries like Ukraine, I’m sorry to say that you are late to know what is happening in Uganda,” critiqued Muwada.

Muwada spoke after Cadic had shown the legislators photos he took with his iPad from Ukraine two weeks ago, as he explained why the French government prefers not directly to interfere in Uganda’s politics.

“It is important to take decisions based on what you are thinking as a country and not what other world powers like the US, UK, China or Russia are thinking,” Cadic said.

Muwada shot back, telling him that even without a war like it is in Ukraine, Ugandans have gone through worse experiences as witnessed before, during and after last year’s general elections.

“Even without a war in Uganda, we have seen similar occurrences during elections; this was strreamed live on people’s social media platforms… Isn’t France compromised that it chose to side with the state than standing on the side of the people of Uganda?” the Kyadondo East MP wondered.

Speaking in a mixture of French and English, Bugiri Municipality MP, Asuman Basalirwa wondered whether in planning his trip for economic diplomacy, the French senator took into account the need for political diplomacy.

“You say that you have military cooperation with the UPDF, does it concern you that the UPDF is one of the greatest violators of human rights in this country, but also its record in where it is engaged in “peacekeeping” missions? It is you who are training them, what are these skills that you are giving them that they end up torturing the citizens they are supposed to protect?” Are there components of respect for human rights in the curriculum that you give these people?” said Basalirwa.

Turning to the oil and gas sector, the MPs showed concern at France’s reluctance to stop French companies from exploiting Uganda’s fossil fuels in accordance with the Paris Agreement on climatic change.

“Coming from your country, even if they are private, to promote the use of fossil oils that are being run away from. Isn’t it a contradiction? It is a very big contradiction. You should be encouraging your companies to help developing countries to begin engaging in alternative sources of energy,” Basalirwa said.

The MPs spoke against a backdrop of a video clip that circulated over the weekend showing French President Emanuel Macron sandwiched by activists at the European Union Parliament in Brussels, Belgium, demanding that his government stops funding to TotalEnergies because of the company’s involvement in the development of the East African Crude Oil Pipeline over environmental concerns.

Ambassador Armand re-echoed his President’s statement telling the meeting that TotalEnergies is a private French company, without government control.

“Our view about this project as per President Macron’s letter to President Museveni is that, it is the right of Ugandans to develop their oil sector but the rights of the people must be respected – their rights on land, there must be compensation of the community,” said Armand.

He added that the French government is also keen on protecting the environment, an issue it had made clear to the French companies involved in the project.