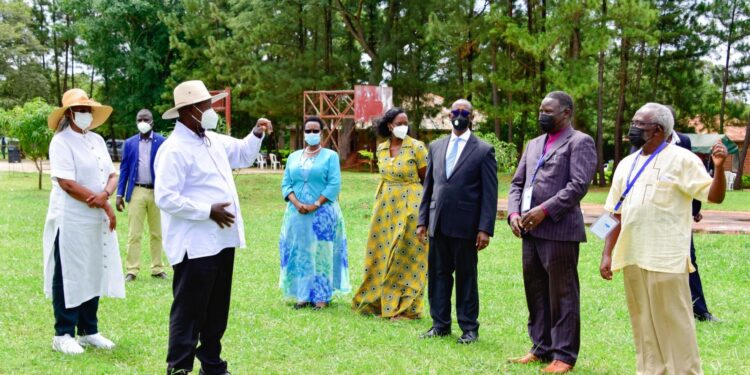 President Yoweri Kaguta Museveni has apologized to the people of Luwero triangle for the underdevelopment that keeps on ravaging their area more than 30 years after he ascended to power.

Museveni and his National Resistance Army, rebel movement used the jungles of Luwero to launch a five-year guerilla war fare that ended with him capturing power in 1986.

“We started the war from here. The people of Luwero received us and embraced the revolution. They sacrificed their lives, food, security and others to liberate this nation. They gave us the wisdom and grace to work with them through to accomplish this mission. With undeniable support and blessings, we succeeded to win the war and started laying the foundation for the long-term transformation of the country,” he said.

Museveni said this over the weekend while speaking during the closing ceremony of the ‘Light up Luwero for Jesus Mission’ where he was chief guest. In press release by the Presidential press unit, Museveni who was in Luwero at the invitation of his daughter Pastor Patience Rwabwogo Museveni of the Covenant Nations Church Luzira said during the struggle, many fighters died of AIDS and other causes and the leaders who took over from them where negligent.

“The leaders who took over stopped the good ground work and the connectivity we had in this area. Some of our support did not reach you as planned. There was relaxation, negligence and lack of dividends on the part of the team of leaders we trusted with the resources to develop this area. Also, the leaders you elected because you had the power, let us down. As a result, many of our grassroot supporters have become disgruntled, angry and often have a wrong perception that we just use them and drop them which is not true,” he said.

He asked to be pardoned by God and the residents of Luwero triangle and move forward together in developing the region.On the issue of environmental degradation, Museveni warned the residents against occupying wetlands and directed the Resident District Commissioners (RDCs), Chief Administrative Officers (CAO), and other leaders to follow-up and preserve the environment or else their jobs will be at stake.

On their arrival at New Hope Academy playground at Kasana Kiwoko, Nakaseke district, Museveni, accompanied by First Lady Janet, were welcomed by Rwabwogo and her husband Odrek, the Minister of State for Luwero- Rwenzori Triangle Alice Kaboyo, the Director of New Hope Uganda Pastor Jonnes Twebaze Bakimi, General overseer of Born-Again Pentecostal Churches Bishop Joshua Lwere among others. They planted three trees as a sign of peace and later held repentance prayers for Luwero triangle led by Bishop Lwere assisted by Pastor Patience Rwabwogo and other religious leaders.

Religious leaders from Luwero, Nakasongola, Nakaseke led by Bishop Lwere and on behalf of residents of Luwero triangle accepted the President’s plea and also asked for pardon from him, the government of Uganda and God for holding grudges against the government, disobeying God, being negligent, lazy, and deterring their area from developing. For her part, Mrs Janet Museveni said she was overjoyed to be be in Luwero.

“When my daughter invited us to be present, I knew that it was an appointment I couldn’t miss. This is because Luwero has a special place in the nation and in my heart. We all know that the Luwero triangle was the place that nurtured the revolutionary movement that ushered in freedom and liberty to Uganda,” she said.

Mrs Museveni said the bush war that was fought in Luwero brought freedom to Uganda, but it also brought a lot of pain to the people of the land who paid a very high price.

“There was a lot of bloodshed during the years of war and when it finally came to an end, Luwero was like the valley of dry bones spoken of in Ezekiel chapter 37. When I came to Luwero in 1986 after the war, my heart was broken by the many skulls and bones that littered the land. The bones were so many that they were piled up in different areas as memorials to those who had lost their lives as a result of the war. The war also created many orphans as children were left alone without the protection of their parents,” she said.

She added that since the war ended, the journey has not been an easy one for Luwero to come out of the spiritual, emotional and physical trauma of those years.

“Even when development has surged through the rest of the country, it has been a slow and painful journey here. That is why I am very thankful to God because he always has his appointed time. I believe this is his appointed time to visit Luwero in a special way. It is only God who can bring the spiritual healing and restoration to the hearts and minds of people so that they can move on with their lives. We as people can partner with God through repentance, a spirit of brokenness and forgiveness towards others”.she said.