Cattle rustlers will lose appetite for the gun – Museveni

LABWORDONG, AGAGO DISTRICT: President Yoweri Museveni has vowed to make the cattle rustlers in Karamoja ‘lose appetite’ for the gun by building and equipping a stronger guard force at Labwordong in Agago district.

Speaking yesterday shortly after passing our 2610 Local Defence Personnel intake 06/21-22 who have been undergoing training at the Labwordwong Training School in Agago district, President Museveni said the cattle rustling that has re-emerged in the region will stop.

“We had removed the 5th division for training and they took advantage of that. But now we have brought it back. It will help make the rustlers lose appetite for the gun,” he said. 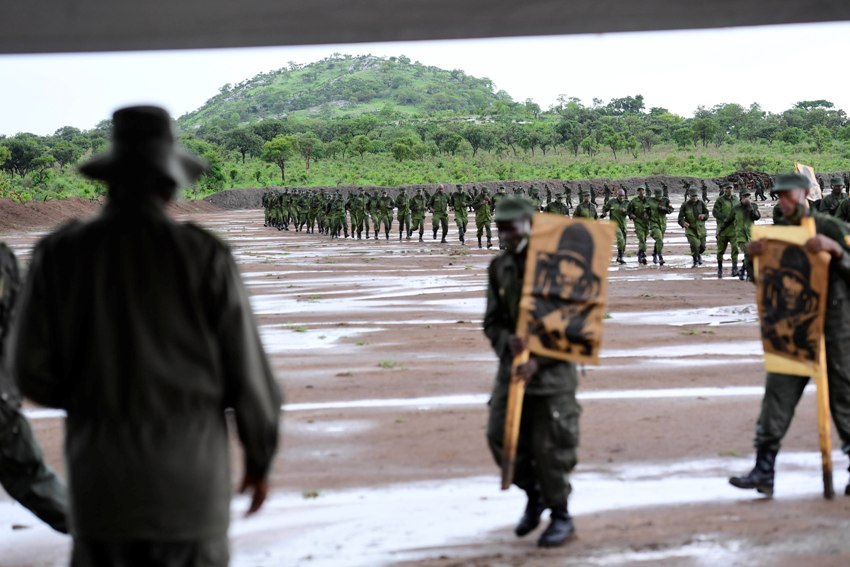 President Museveni who is also the Commander in Chief of the UPDF had earlier, despite a heavy down pour, witnessed field craft and shooting range demonstrations by the new recruits before inspecting a guard of honour and a match past by the new recruits.

“I am very happy to come here in Labwordong. I was here long time ago when fight Karimojong. I thank you for remembering to turn it into training wing. I am also happy that the leaders here and elders gave land to army to train. We shall compensate you for the land don’t worry. We need to use the land for training. The training security wing here; it’s good for the army and it’s also good for security,” he said.

The President said with the big number of trainers, the school now needs a guard force.

“One you have got a big number of people here, those who disturb security will not come. We need a guard force to contribute to security of this area. It will also contribute to the economy of the area. These people are here, government buys food for them, they get salary and go to shop for other essentials here. The community benefits,” he said.

The President commended the army leadership for putting the training school here and pledged to support the facility in the construction of new classrooms, instructors’ houses and improving the shooting range.

According to the Labwordong Training School Commandant Lt. Col. George Stephen Eyoku, the 2657 trainees including 516 females were voluntarily mobilized by the national recruitment team of the UPDF in October 2021 for 24 weeks. 47 trainers however failed to finish the course.

“Our objective is to train young energetic Ugandans with values, norms and ideological orientation of the national army. The development of character mentally and physically is key. They are trained to serve their country diligently. The Army wants a fit you rather than a sick you,” he said.

The Deputy Chief of Defence Forces Lt Gen Peter Elwelu commended the training school instructors for a job well done and welcomed the trainees to UPDF.

“You are welcome to the UPDF family. Here the army is not a job, it’s about service to our people. It is important to look at it from that angle otherwise you will be disappointed. If you are to stay in the UPDF, do your work and do it well. It is not about pay but service,” he said.