by Everest Mukiibi
in National, News
5 0 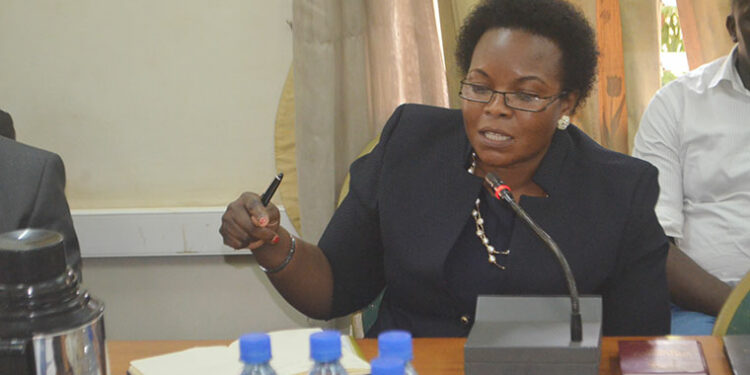 MPs sitting on the Adhoc Committee of Parliament investigating the process of distribution of 82.05 acres of Nakawa-Naguru land to different ‘investors’ have questioned the Minister of State for Housing, Persis Namuganza for alleged influence peddling.

Namuganza, who at the time of the land distribution served as Minister of State for Lands, on Tuesday appeared before the committee to defend several letters written to President Yoweri Museveni through her office by ‘investors’ seeking for land allocation. These letters have since the start of the investigation put the Minister in the spotlight.

MPs led by the Adhoc Committee Chairperson Dan Kimosho accused Namuganza of using her office to pressurize Uganda Land Commission to allocate land to some investors even when due diligence had not been done to ascertain their capacity for developing the land.

Sarah Opendi, the Tororo Woman MP noted that Anil Damani purportedly wrote a letter to the President through the Minister seeking land. She noted that the investor could later deny the letter while appearing before the committee.

“There was a request for 5 acres by Anil Damani to construct affordable condominium apartments but he denied knowledge of this letter, where did the letter come from?” Opendi asked.

In response, Namuganza denied any influence-peddling saying that she only received requests from people who needed land and later forwarded them to ULC for action.

The Minister also denied the letter purportedly written by Damani to the President through her office. She said that all documents received by her office are officially received and stamped.

Namuganza also noted that in regard to the presidential directives, the Ministry could not question the President.

Namuganza was also faulted by MPs for not advising the President adequately citing the allocation of 15 acres of land to the Internal Medicine of Virginia whose directors are not known.

The committee tasked Namuganza to avail all land requests that were sent to her office in regard to the Nakawa-Naguru land.

Meanwhile, the former Minister for Lands, Housing and Urban Development, Beti Kamya also interfaced with the committee and denied instructing ULC to allocate the Nakawa-Naguru land to particular investors but only gave guidance throughout the process.

Asked by the Committee Chairperson Dan Kimosho whether she wrote any letter directing ULC to allocate land to the intended developers,  Kamya said that she had written and also forwarded applications to ULC.

“But I cannot remember their names since ULC is mandated to hold and manage all land in Uganda legally owned or acquired by Government in accordance with the Constitution of Uganda,” said Kamya. “The Commission is also responsible for holding and managing land owned by Uganda, outside of the country.”

Sarah Opendi, the Tororo Woman MP asked Kamya whether ULC has any address for the Internal Medicine of Virginia, but Kamya said that there is a presidential directive in regard to the hospital.

Kamya said that she kept reminding ULC to implement the Presidential directives but within the law.