by Everest Mukiibi
in News, Politics
24 0 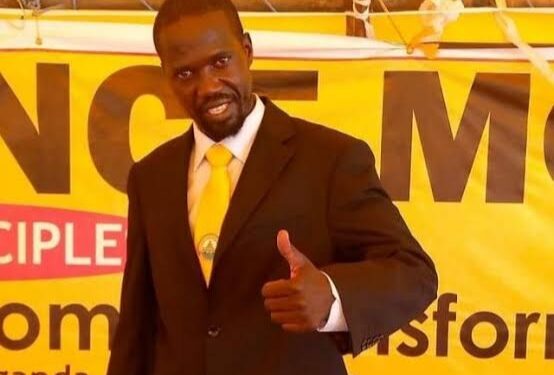 In a two-minute and five seconds recorded audio that has gone viral on social media, the troubled Musician turned politician alleges he has never liked the party but joined it to save his life that was under threat.

Otim defected to the NRM party in 2020, from the National Unity Platform (NUP) party where he had been serving as a mobilizer for Northern Uganda.

According to Otim, he never genuinely supported President Museveni and had been all along pretending as an NRM loyalist to postpone a plot to kill him. He however didn’t mention those who were behind the plot.

“…I’m denouncing NRM, I reject Museveni, I reject the Satan with all its deeds. I was close to it (Satan) because I was helpless and wanted plans to kill me postponed. I acted as if I was a genuine NRM loyalist, dressed in yellow 24/7, went to the market, and jogged while dressed in yellow. Some people thought I was more yellow, nobody can be more yellow than Museveni and his few men, you can never be more holy than the pope…” he said.

Otim alleges that President Museveni doesn’t pay attention to peace talks adding that his ways of work are mostly through coercion.

“Museveni doesn’t understand the language of peace talks; he doesn’t know peace. Most of his work is through intimidation,” he said.

The Gulu NRM Chairperson James Ocen however says they are unbothered about his defection arguing that there is free entry and exit in the NRM party.

He however notes that Otim’s conduct has given them a lesson to learn on who their genuine members are and the opportunists adding that in the next registration, they will be keen on assessing the new members.

He has however been in the spotlight recently after posing with guns and ammunition while threatening some individuals and calling for the killing of people he alleges are against the Acholi.

The Police in Aswa River Region recently picked interest in investigating Otim’s remarks and poses with guns yet he is a civilian.

It’s believed the disgruntled musician is in hiding in the neighboring South Sudan where he fled two months ago fearing arrest from Ugandan security personnel.