How Government risked lives of Islanders with MV Kalangala management

by Watchdog Uganda
in National, News
5 1 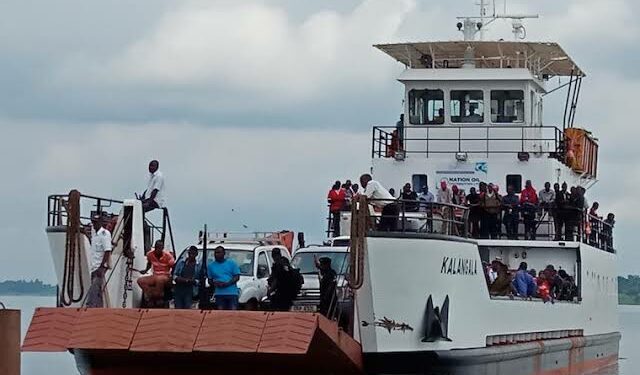 In 2014, after a handful of years while Kalangala’s major marine vessel (MV Kalangala) that plies the Entebbe Kalangala route was operated by the Ministry of Local Government, the Ministry of Works and Transport agreed to tender the vessel again.

The vessel had since inception been tendered out to Mulowooza and Brothers, a civil works firm operated by the late James Kibuuka Mulowooza, a then tycoon in Kalangala district.

The Ministry of works then argued that it had become tiring for the Maritime department of the Ministry to continue operating the vessel and thus needed to be contracted to a viable operator who would run it on behalf of government.

The Ministry, led by the Chief Mechanical Engineer then TK Ngatuna advertised a prequalification of bids from competent companies to take up the contract.

The contract entailed to among others supply fuel on the vessel, engage in ticketing and the collection of revenue from the different, servicing and rehabilitating of the vessel, among other services.

A bid was later sent out to the media, soliciting for competent companies to take on the contract.

Amongst the interested parties was Nation Oil Distributors Limited and Mulowooza and brothers.

“Because the engineers were biased, they decided to increase terms of the contract to chase away other probable contractors who would out compete the preferred company, Nation Oil Distributors Limited,” a source who asked not to be named told this website.

Two weeks later, after only one company had applied for the contract, a meeting was called by the Maritime Administration department of the Ministry of works and Transport where several probable contractors, Nation Oil Distributors Limited, District Leaders in Kalangala and Engineers at the Ministry, led by then acting Chief Mechanical Engineer T B Ngatuna.

District leaders, led by then Kalangala MPs and the District executive tasked the Ministry to extend bidding process, reduce in terms for a contractor to take charge of the Vessel to allow competition and the approval of a fine reliable contractor to offer islanders a service.

However, after the meeting, a team from the Ministry of Works and Transport attached signatures of the attendees of the meeting and submitted “forged” minutes to the office of the Attorney General clearing that since only Nation Oil Distributors Limited had applied, “It was an agreed position by all stakeholders and probable contractors that only Nation Oil Distributors Limited had the requisite requirements to take on the contract,” contrary to what had been discussed in the meeting.

However, on complaining to the Attorney General, all other parties who attended the meeting were suprised to see that the Ministry of works had submitted minutes contrary to what had been discussed and their signatures attached.

“What annoyed further was the fact that we had left only the Ministry staff with the work of writing minutes. We all wondered, but had no alternative minutes to submit and Nation Oil was awarded the contract,” the source said.

Prior to the occurances, one of the staff at the Ministry of Works and Transport had complained that a high profile staff at State House had stormed the Ministry threatening to report to the “President” if Nation Oil Distributors Limited with its Managing Director Sadala Musoke are not awarded a contract to run MV Kalangala.

The vessel is given up to Ugx 5.4 billion by Government of Uganda to operate. “So everone at the time was fighting to get such a lucrative contract.” A source at the Ministry of Works and Transport says.

Later, after MV Kalangala had been taken for major servicing in Mwanza, Tanzania, Ngatuna, acting on behalf of the Permanet Secretary, Ministry of Works and Transport them, Alex Otto wrote to Nation Oil Distributors Limited on February 15th, that he had been awarded the contract and would begin execution of the contratual obligations as soon as MV Kalangala return from overhaul, in the first week of March.

“Please prepare to take over the operations as soon as the Vessel returns from servicing,” Ngatuna wrote.

Later, Mr James Kibuuka Mulowooza (late) of Mulowooza and brothers threatened to petition court over malpractices by the staff in the Ministry on how they awarded the contract.

Instead Sadala, with advice from an engineer in the Maritime Adminstration Department, in an August 15th submission, petitioned the commercial court seeking a directive to hand over MV Kalangala to his company since he had already recieved a letter from Ministry of Works and Transport asking him to prepare a hand over.

Sadala argued that he had already used money to buy tickets, prepare sheds and hired houses where Stewards from NODL would stay while operating on MV Kalangala.

He also claimed, he had already hired offices (Which have never existed) both in Entebbe and Kalangala to handle operations of the vessel.

The Presiding Justice Madrama ordered for the immediate hand over of MV Kalangala to NODL as a revision of the contract is being made by both parties.

However, no ammendments in the agreements was made since. At the handover of the Vessel to Nation Oil (NODL), former minister, then MP for Kyamuswa Tim Lwanga Muteekaanga decried the fraudulent process that led to the awarding of the contract to Hajji Sadala Musoke’s Nation Oil Distributors.

“Why were other applicants for the contract thrown out?” Tim Lwanga asked while in Nakiwogo, Entebbe during the handover.

No sooner had Sadala been awarded a contract, than he protested through court the remittance of Ugx 70 million from the daily ticket collections to the consolidated fund and proposed a deliberation of only Ugx 30 million.

“His argument was that there were fewer people who boarded the vessel. We all wondered since MV Kalangala would collect 2.4 million shs on a return trip daily. Passengers are increasing yet he is lieing that there isn’t income,” says one of the crew members of the vessel who has served for nine years.

The vessel is mandated to carry 100 passengers, each paying Ugx 14,000, 40 tons of locomotives and 140 tons of hard cargo in the cargo center, also known as the “Gamula” on a single trip.

“This means, on a return journey, he doubles and can get the required monies instead of shying away,” a senior operator on the vessel says.

“There are only two problems with this. One; in case of an eventuality, only a handful of people would be looked for, leaving others in danger. The vessel’s insurance is for only 100 passengers,”One of the crew safety officers told this website.

Also, Nation Oil Distributors Limited has on several occasions billed Government of Uganda through the Ministry of Works and Transport money to cater for skilling and upgrading of the satff and crew members of the vessel.

Among the monies solicited from government was the facilitation of USD 10,000 for the upgrade of Mr Bbosa Katasa’s education, only for Mr Katasa, then Chief Engineer on MV Kalangala to forge documents from both the United States and Tanzanian Marine schools.

Katasa was suspended upon realization by the Ministry that he operated on fake documents. “The information reaching our desk is that the Chief Mechanical Engineer and some staffers at the Ministry want to force his return on the vessel without going back to
school.

Sadala is also accused of swindling more than 1.87 billion from Mundao Engineering Associates, Tanzania for repairing MV Kalangala which was not done more than a year ago.

“What we know with a letter of which we have shared with you is even USD 32,000 was shared between four senior officers of MV Kalangala and Nation Oil. They refused to pay and decided to share the money leaving MV Kalangala not repaired,” a senior operator on the vessel told this website.

Also other monies were shared by several officials of the Ministry of
Works and transport, some of which deliberations this website has obtained.

Currently, the ferry’s gear box remains faulty and increasing the amount of time one can travel from Kalangala or Entebbe from 2 and a half hours to four hours.

Also, the sewarege treatment plant was not repaired leaving the vessel disposing off wastes 12 nautical miles from the shoreline of Lake Victoria into the lake, leaving all creatures including human life susceptible to harm.

“Also the operator has since inception provided fake tickets to all passengers, he only declares 50 passengers out of the very many we take with increased Nepotism and sectarianism. What we need is to put an end to all this theft and harm from islanders,” says Richard Ssekitolekp, one of the Civil Society Leaders in Kalangala.

It is upon such background that the leaders in Kalangala, led by Farouk Sansabula and Ronald Jamba, the councilors at the District Local Government petitioned government and the Ministry of Works and Transport asking for an investigation into the operations of the vessel and find solutions to among others, the increased fraud on the vessel, over loading and crowding, and the forgery of Government reciepts to steal public funds.

“We also want to increase the number of indigenous Islanders to work on the vessel to not only get employment, but also understand what islanders really need when they talk about better service delivery. Our own children understand what we need,” Sansabula says.

Upon hearing such information, Ministry of works and Transport officials who are a beneficiary of the Nation Oil racket ordered Vessel Masters and Captains to immediately refute the allegations on grounds that it brings the Ministry to disrepute.

Sources that shared mails and correspondences with this website said they are now in fear that their jobs would be lost if they do not defend all illicit acts on the vessel.

“They now want us all to refute tbe allegations yet they are true! Why do they want us to operate a vessel in dangerous conditions. These people want to kill Ugandans,” one of the sources on the vessel told this website.

A meeting between the operator, Kalangala leaders and officials from the Ministry of Works and Transport is scheduled on Tuesday this week to find a solution to the current impasse.

It has been established that one of the top most engineers in the Ministry of works and transport is a partner in Sadala’s Nation Oil Distributors Limited, investing more USD 50,000 in his private MV Nodl Marine Vessel. The vessel is expected to get clearance from the Ministry to act as an alternative to MV Kalangala when there is an increase in the number of passengers, with depreciated fuel and other services.

More details in the next episode.

DENIS JJUUKO: Target all business transactions, not just land, to widen the tax base