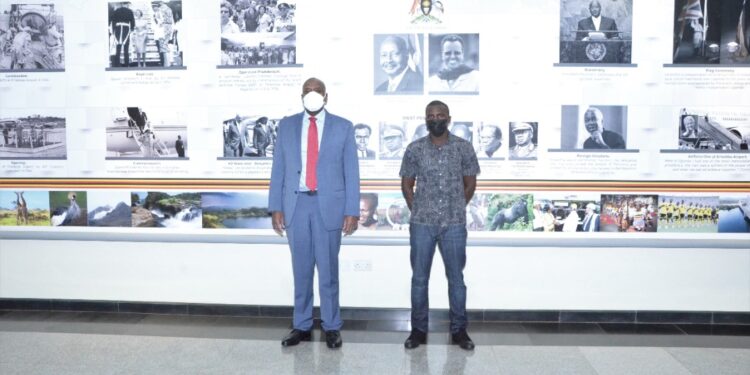 Gen Muhoozi Kainerugaba with Private Arinda on return to Kampala

First son, Gen Muhoozi Kainerugaba charm, has worked on Rwanda’s tough president, Paul Kagame. He has returned home with a prisoner, who was arrested on Rwanda soil last year.

Gen Kainerugaba, UPDF’s lands commander, flew on Saturday morning to Kigali to meet with President Kagame who has not met eye to eye with his father, President Yoweri Museveni over a political conflict which culminated into a border closure between two countries.

Tensions between the two countries have been souring over the past couple of years, leading to shooting of Ugandans on Rwandan soil and border closures.

Rwanda accuses Uganda of sponsoring rebels and arresting Rwandans in Uganda. While Uganda, makes counter accusations to the southern neighbor, who has been accused of infiltrating the security of the pearl of Africa.

While discussions of normalizing relations between the countries is said to have been on the table, however returning home with Private Ronald Arinda who was arrested by Rwanda forces as he purchased cattle to pay for his bride price last year, has scored for Gen Kainerugaba.

Gen Muhoozi, returned with Private Arinda on the same plane.

On his return, he tweeted, @I thank President @PaulKagame for the very warm reception my delegation and I received in Kigali today. We held very cordial and in-depth discussions about how to improve our bilateral relations. I’m confident that under… …the leadership of our two Presidents we shall be able to quickly restore our historical good relations.”

He added, “I further thank President @PaulKagame for honouring my request to release our SFC soldier, Private Ronald Arinda, who strayed into Rwandan territory on personal business without permission. I returned with him tonight to Uganda. Longlive the friendship of the two countries.”

Arinda, 23, a resident of Kakyerere in Ryakarmira town council Kabale district in Burera district in Northern Province, was arrested a few meters away from the Uganda-Rwanda border as he crossed to Rwanda to buy cattle at the neighboring market cheaply.

Brig Bwekaso Flavia, then Spokesperson of UPDF said, “He had crossed to Akatare ke’nte (cattle market) in Rwanda, but because, some of the Rwandan security operatives knew him, he was arrested and taken”, Byekwaso confirmed.

She explained that the matter is being handled by higher offices to secure Arinda’s release.

Until today, Arinda had not got his release. He has Muhoozi to thank for his freedom.

Muhoozi’s fans have celebrated this move with moving tweets.

Michael Katungi @MKatungi posted, @Mathew 18.0-14.Our and Saviour Jesus Christ tells the parable of a lost sheep.The farmer will leave the 99 and search for 1 lost,returns amid jubilation.Soldiers lives matter as reflected with Clf returning with our soldier. Bravo our war and peace time leader @mkainerugaba”.

Edmund Kagire @kagire: @Great moves by Lt. Gen @mkainerugaba. Honestly nobody saw this coming. My unsolicited view, he has all it takes to sort this out, by a snap of a finger, since everything rotates around military/intelligence/security. No?
Do you have a story in your community or an opinion to share with us: Email us at editorial@watchdoguganda.com

OFWONO OPONDO: NRM at 36; more Work yet to be done to Stamp out Malaise