Its not a favour but our right! Museveni demands two permanent seats for African countries on UN Security Council

by Stephen Kalema
in News, Politics
1 0 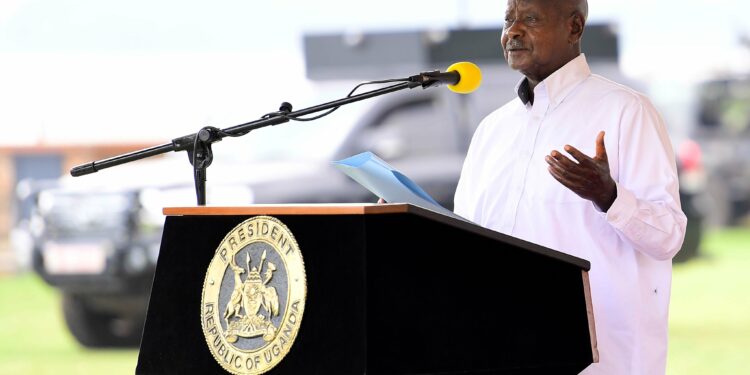 President Yoweri Museveni has requested the United Nations (UN) to give African countries two permanent seats on the Security Council.

Museveni said African countries must be on the UN Security Council to ensure that it is not used negatively against Africa and that it is, instead, used positively for Africa and the rest of the World.

The President made his demands known while speaking during the 9th Ministerial level meeting of the African Union Committee of 10 on the reform of the United National Security Council on Thursday at Speke Resort Munyonyo. Where he expressed the unfair treatment of the Security Council towards African countries.

“It is, therefore, a circus to waste time, year after year, debating the obvious. We demand our right of having permanent seats, not the seasonal ones allotted to us by the present unfair system, on the UN Security Council. Every reasonable man, as the lawyers say, I do not want to bother myself talking of fair-minded man, should see that the 1.4billion Africans that will be 2.5billions in the next 29 years and billions of Asians, the formerly colonized people, cannot be kept out of that UN Security Council on terms similar to the present five (USA, China, Russian, Britain, France) that monopolize that body,” Museveni said.

“When has the UN system been misused to commit aggression against Africa? I can, straight away, quote two cases: the murder of Patrice Lumumba in 1961 and the attack on Libya. How much chaos have these two mistakes caused in Africa? Who is answerable for these two mistakes?” he asked. Adding that the attack on Libya, for instance, was definitely behind the chaos in Mali, Niger, Chad, Burkina Faso, Nigeria, etc. Congo has been in successive problems in the last 60 years yet the Security Council has done nothing.”

Museveni added that the membership of African countries on a permanent basis would stop such mistakes.

” How and who should be the members of this body? It is already known that Africa should have two members of the Security Council on a permanent basis, elected maybe every four years by the African Union on a rotational regional basis. If we had such arrangements, mistakes like what happened in Libya, would not have happened,” he said.

Ever since the formation of the UN Security Council, for a country to have a permanent seat on this council, it must have a well-constructed and self-sustained economy that is big enough to support itself and other member countries. However, President Museveni has bashed this type of a yardstick used by the UN system arguing that it’s unfair and segregates continents like Africa.

“Trying to use the size of the economy, etc., is not correct. Germany’s economy is now bigger than either the economy of the UK or France. What should we do now? Should we remove those countries from the UN Security Council or what?” he asked.

He added that giving African countries two Permanent seats on the UN Security Council is not a favour by anybody but a right of all people that inhabit the planet earth.

Currently the UN Charter of 1945 grants only five members countries to have Permanent seat on it’s Security Council and these include; China, France, Russia, the United Kingdom and the United States.