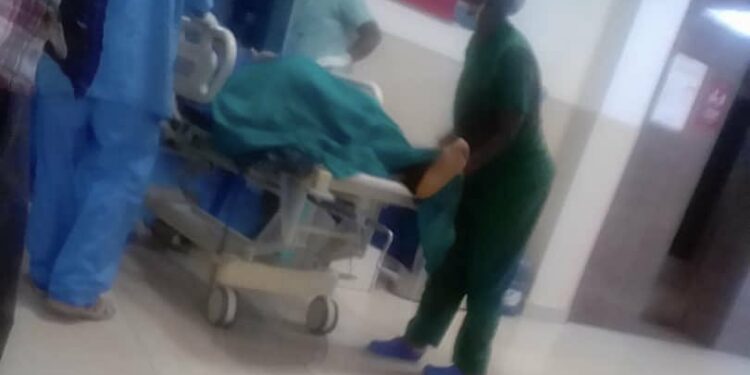 The leg of a traffic police officer who was shot by a Uganda People’s Defence Forces (UPDF) soldier, has been amputated.

Over the weekend, Robert Mukebezi was shot in the leg by Major Alfa Okua who is attached to the Chieftaincy of Military Intelligence (CMI) headquarters in Mbuya. He was first taken to Mulago National Referral Hospital before being transferred to Victoria Hospital for better treatment.

Medics have taken a tough decision to amputate the leg of the traffic officer in order to save his life.

Last Sunday, Mukebezi was shot by Okua who tried to block police from towing a military vehicle that was involved in an accident in Ntinda, Kampala.

According to sources, Police Constable Mukebezi, was seated on the passenger side of a breakdown truck that was towing a military Toyota Prado TX that had knocked a signpost of Kobil at Naalya when they were intercepted by soldiers in a double cabin vehicle with military registration number plates at Ntinda traffic lights at around 6am. Mukebezi who was shot in the leg, was rushed to Mulago National Referral Hospital in critical condition.

“The investigations are ongoing to establish the shooter,” Owoyesigyire said.

UPDF Spokesperson Lt Col Ronald Kakurungu in a statement dated 16th January, 2022 also noted that preliminary information indicates that there was a misunderstanding between the traffic officer and the soldier regarding the recovery of a military vehicle that was involved in the accident.

“In the process unfortunately, the traffic officer was shot and injured in the leg. The officer was rushed to Mulago Hospital and fortunately he has been stabilised and he is out of danger,”Lt Col Kakurungu said.

” The suspect is still on the run but a search for him is underway and very useful clues leading to his arrest have already been obtained. UPDF and Uganda Police have also launched joint investigations into the unfortunate incident.”

SAMUEL LUKANGA: The National House-to-House Polio immunization campaign by the Health ministry is a solid solution to fight the killer disease