His Honorary Certificate issued at Darmstadt on 11th January, 2022 was received by his lawyer Eron Kiiza in Kampala on Friday.

According to Ralf Nestmeyer, the Vice President in charge of Writers in Prison, Kakwenza’s appointment was based on his outstanding literary work and his efforts in continuously recalling the utmost importance of freedom of expression “in our days”.

Kakwenza was in 2021 named International Writer of Courage by PEN.

PEN Germany is part of the worldwide association of writers founded in London in 1921, now known as PEN International. One of over 140 autonomous PEN centres around the world, PEN Centre Germany is based in Darmstadt, Hesse.

Former Makerere University research fellow also renowned government critic Dr Stella Nyanzi said,” Tonight, I join several others to congratulate Kakwenza Rukirabashaija for his appointment as an honorary member of PEN Germany. While the brutal dictatorship in Uganda unjustly tortures and locks up Kakwenza for his freedom of expression, the international community is celebrating him for “his outstanding literary work, continuously recalling the utmost importance of freedom of expression in our days.” Thank you Counsel Eron Kiiza for receiving the honorary certificate on his behalf, while our comrade sleeps battered and brutalized in prison.”

Kakwenza was on Tuesday charged with two counts of Offensive Communication at Buganda Road Court.

Kakwenza, a controversial government critic was arraigned before Court, charged and remanded to Kitalya State Prison.

The charge sheet stated that Kakwenza willfully and repeatedly used his Twitter handle to disturb the peace of His Excellency the President of Uganda General Yoweri Museveni and First Son Lt Gen Muhoozi Kainerugaba with no purpose of legitimate communication. 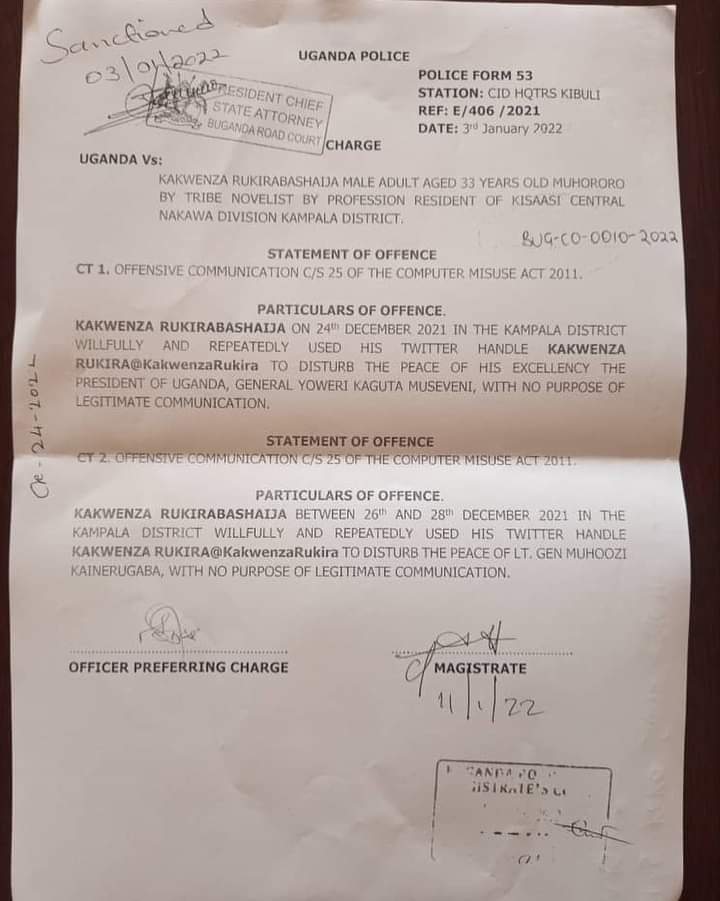 According to Police’s Criminal Investigations Directorate Spokesperson Charles Twiine, the writer will be brought back to Court on 21st January, 2022 for case hearing.

The development came hot on the heels of High Court’s order to security bosses to produce Kakwenza’s body before Court on 12th January 2022.

Kakwenza’s lawyer Kiiza last Monday said his client had been tortured while in a week-long detention to an extent that he is urinating blood.

PEN Centre Germany upholds the objectives of PEN International in protecting the freedom of intellectual expression throughout the world. PEN Centre Germany supports two main programmes: Writers in Prison and Writers in Exile. Founded in 1999, Writers in Exile is a programme supporting international writers who are given the opportunity to live and work in safety, with accommodation provided in Berlin, Cologne, Hamburg and Munich together with living expenses.

Since 1985 PEN Centre Germany has awarded the Hermann Kesten Medal for outstanding services to persecuted authors.

PEN Centre Germany is also a participant in the annual Writers for Peace Committee founded in 1984.

I will not allow DPP to play with my case! Lawyer Mabirizi cries foul as State takes over Bugingo’s ‘illegal’ marriage lawsuit