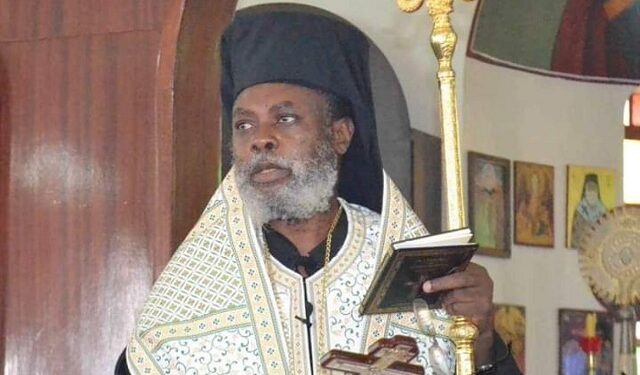 His Eminence Metropolitan Leronymos Muzeeyi is the new Archbishop of the Orthodox Church of Uganda. He replaces Archbishop Yona Lwanga who passed on in September last year.

Metropolitan Muzeeyi was elected at the end of the three days of the Holy Synod of the Patriarchate of Alexandria between January 10 to 12. The synod meeting held in Egypt was chaired by His Beatitude Pope Theodoros II, according to Fr John Kibuuka Bbossa, the chairperson of the board of trustees of the Metropolis of Kampala.

His appointment was confirmed by St. Nicholas Orthodox Church Namungoona.

“Metropolitan Leronymos (Muzeeyi) of Mwanza has been appointed as the new Archbishop of the Holy Metropolis of Kampala and All Uganda,” the Church said on Wednesday.

The elected Metropolitan is a Ugandan National and has been the Metropolitan of Mwanza and Exarch of Western Tanzania, which is part of the Church of Alexandria since 1999.

According to Uganda Radio Network, Archimandrite Constantine Mbonabingi, the vicar of the Holy Metropolis of Kampala describes Metropolitan Muzeeyi as a dedicated, developmental and humble leader who puts all his life to serve his faith and those in need.

Muzeeyi was born in an Orthodox family on March 18, 1962, in Bulopa which is found in the present-day Luuka district Busoga region.

He attended Kasaka Primary School, Chwa II Memorial College and Kololo Senior Secondary School. While growing up, Muzeeyi is said to have been very close to Metropolitan Theodoros Nankyama the then metropolitan of Kampala and stayed at the Mission Center in Namungoona for seven years where he learned the Orthodox way of life as a teenager.

Due to his demeanour and spiritual depth, Muzeeyi was sent to study at the School of Theology of the University of Athens in Greece by Archbishop Anastasios Yannoulatos, who is the current Archbishop of Albania. In 1995, Muzeeyi was ordained to the diaconate by His Grace, Bishop Theodoros Kyrineos, who is the current Patriarch of Alexandria and all Africa. Subsequently, he became a priest the following year.

The then newly ordained priest returned to Uganda where he served as the Vicar General of Kampala for a year and then was assigned to serve as Vicar General of the Diocese of Bukoba in Tanzania, an office he held from 1997 to 1999.

The following year, he was elevated to the office of Bishop of the same See. Through hard work and commitment, Muzeeyi grew the Orthodox Church in Tanzania by the construction of new churches, the establishment of seminaries to prepare future priests and holding regular youth and women’s seminars to enrich the faith of the new believers.

In recognition of his pastoral and missionary work, the Holy Synod of the Patriarchate of Alexandria elevated Bishop Leronymos to the rank of Metropolitan of Mwanza on November 23, 2007.

Uganda Airlines donates to U20 She Cranes, confirms partnership with FUFA