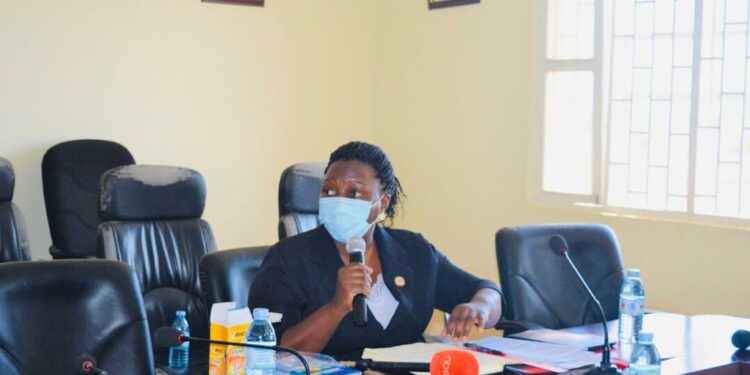 The Permanent Secretary (PS) for the Ministry of Energy and Mineral Development (MEMD) Eng Irene Batebe has assured stakeholders in the mineral and mining sector that once the Mining and Minerals Bill 2021 is passed, all the regulatory challenges they are facing now will be solved.

Addressing the officials from the Directorate of Geological Survey and Mines at Entebbe on Monday, Eng Batebe said the entire sector is facing a lot of challenges but all of them will be history once the bill is signed into law.

Eng Batebe added that Mining and Minerals Bill, 2021 will fill many gaps that were left by the Mining Act, 2003. In that the present law is inadequate’ and ‘obsolete’ in protecting and streamlining the mining sector in the country. Also, the new bill is seeking to promote transparency of mining operations, organize, license, regulate and transform artisanal and small-scale mining in Uganda and create an enabling environment for attracting investments among others.

In support of Eng Batebe’s statement, the Minister of Energy and Mineral Development, Ruth Nankabirwa also added that her entire administration and all the technocrats are going to peruse through the bill.

“We are passing through it clause by clause so that we are good to shoot before the Parliament and defend it. We found it already worked on by the previous administration but as new leadership, we want to be taken through it step by step so that we can be able to defend it. The best thing is we are moving together as a team and by the end of this week we shall be done with it.”

Under Article 244 of the Constitution of the Republic of Uganda, building substances such as sand aggregates are not regarded as minerals but Parliament has the mandate to regulate the exploitation of such substances and the new Bill is introducing the acquisition of licenses for building materials such as sand, murram, aggregate and clay exploited for commercial purposes.

The bill also seeks to introduce the production sharing agreement system, set up a National Mining Company to handle the State’s commercial interests in the mining subsector and establish the Mineral Protection Force within the Directorate of Geological Survey and Mines to protect minerals against malpractices and enforce compliance.

The bill was tabled before Parliament for the first reading last year in November and on 6th December it was brought before the Parliamentary Committee on Environment and Natural Resources for scrutiny.