by Mourice Muhoozi
in Business, News
2 0 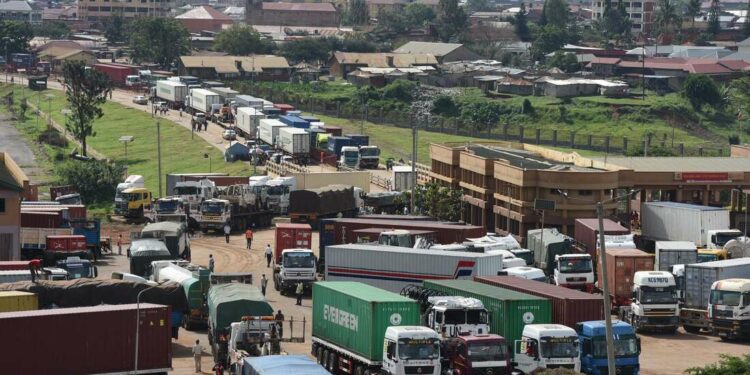 Truck drivers in charge of transporting trade items in and outside Uganda, have today Wednesday called off their month old strike, inspired by hiked Covid-19 testing fees.

The strike, which was announced last year, was in response to the implementation of mandatory Covid-19 testing for truck drivers by Ugandan health authorities.

This follows an astonishing pronouncement made yesterday by the East African Community (EAC) to institute a free Covid-19 testing scheme to run for a week, in order to defuse cold-hearted attitudes among the truck drivers.

The EAC directive will take effect and starting today, truck drivers, their turn boys and other crew will access free testing services at border points, a scheme that is poised to run for a week.

The furious drivers allege that previously, permission to cross several border points in and out of Uganda, was granted to one, after testing three times and that each time, an exorbitant fee was charged, something that raised serious alarm.

The drivers decried what they termed “broad day robbery”, alluding to the situation at Malaba, Uganda-Kenya border, for being charged highly in an ettempt to access Covid-19 testing services.

In a blunt expression of dissatisfaction, they castigated the East African Community regional grouping, for keeping a blind eye in the face of such injustices metted against the truckers.
They claimed it is its role to arbitrate and find a long lasting solution to the faltering system, which has bred cold-hearted and blow-beaten feelings among these truck controllers.

The Chairperson of truck drivers carrying imports and exports, in and out of Uganda respectively Bilon Kinene, plainly told his fellow drivers to keep making follow ups and remain the responsible officials of their roles, instead of taking to industrial action.

He expressed regret over the untenable losses Uganda has suffered as a result of sporadic protests along border crossing points, adding that some drivers who are not of the Ugandan origin have been using other routes to evade the chaos at Ugandan borders.

“We have discovered beyond doubt that Uganda is the number one looser in an event of strikes of this nature, because nations like Rwanda, Burundi have been using other alternatives to get their products into Uganda from Mombasa in an attempt to bypass such chaos” said Kinene.

“Everyone is tired of the chaos at Uganda’s border crossing points, everyone has voiced such concerns on several occasions. In an event of such a stampede, Ugandan financial losses are collosal and have apocalyptic consequences. Worse still, we are going to loose a lot of money as a result of this free testing innitiative by EAC.”

He tasked government to do something about the fragile situation at Malaba border to avoid incurring gigantic losses, leading to loss of revenue.

At the begining of last year, Ugandan authorities passed mandatory Covid-19 testing for all truckers moving in and outside the country, regardless of whether they possessed Covid-19 certificates or not.

A fee amounting to Shs.3,600 was passed for the cause, something which raised alarm among truck drivers who announced a strike and demanded that government abandons such policies, before they could begin operating normally.

Uganda’s Electoral Commission should borrow a leaf from Victoria University