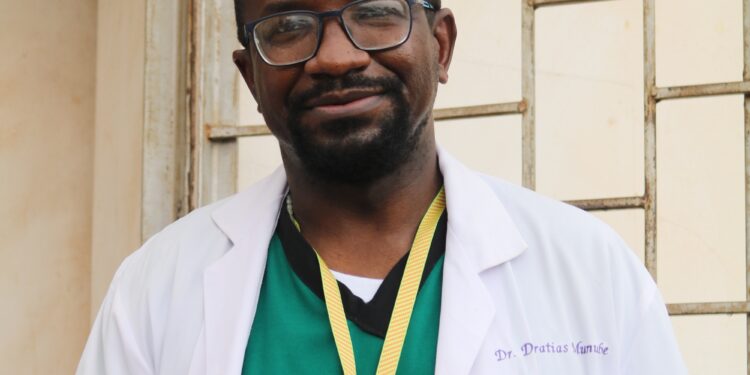 Dr. Deogratias Munube, a consultant pediatrician at Mulago Hospital and lecturer in Makerere University’s Department of Pediatrics and Child Health is revolutionizing Sickle Cell Disease (SCD) research in Uganda. Despite the fact that 70% of SCD patients live in Africa, research on the disease and its related complications is negligible. Dr. Munube’s research efforts are mounting evidence on SCD-related stroke, a devastating and potentially fatal complication of the disease. Worryingly, of the 245,000 babies born annually with sickle cell disease in Uganda, 6.8% of these are affected by stroke.

For a decade now, Dr. Munube has invested enormous resources with support from Mulago Hospital and Makerere University to study SCD, an inherited blood disorder responsible for chronic anemia, severe recurrent episodes of pain and strokes in children. He knows from his own patients how tough it is to battle the disease on a personal level.

Although global literature suggests that children with SCD in Africa are not at risk of getting a stroke, his research suggests otherwise. According to his clinical observation, more children are presenting with debilitating stroke. Out of every 10 children with SCD admitted daily to the Acute Care Unit of the pediatric department, about three have stroke.

“The background that many of us have is that stroke is for elderly people afflicted with hypertension, diabetes or a chronic disease. However, during my postgraduate studies, I saw many children with SCD coming in with stroke and this compelled me to research more about the condition,” Dr Munube said during an interview.

By happenstance, he is the only specialist handling SCD-related stroke at Mulago Hospital, the country’s national referral hospital.

In a 2016 study he conducted on the prevalence of stroke in children admitted with sickle cell anemia to Mulago Hospital, he found that the risk of stroke is highest during the first 10 years of one’s life and most prominent between five and 10 years. Of the 100 children enrolled for the study, 6.8% suffered a stroke and majority of these had other health complications such as severe anemia, acute bacterial infection and pain crisis at the time of presentation.

“My initial work was to describe children who have SCD and how they present with stroke. I found that the commonest presentation was weakness in one part of their body and thus the inability to use that part such as the right upper limb or lower limb,” he explained.

This weakness is a result of the stroke blocking an artery that supplies blood to the brain, a condition scientifically called ischemic stroke. Consequently, the blockage reduces blood flow and oxygen to the brain, leading to brain damage.

Other presentations observed were: abnormal behaviour such as shouting or laughing unnecessarily; inability to respond to a parent’s call; drooling of saliva, drooping of the face and even blindness.

Ischemic stroke, which constitutes 84% of all strokes among sickle cell sufferers, is highest during the first 10 years of life and after 30 years. Inversely, patients may also suffer a stroke that is caused by bleeding on the brain, scientifically called a hemorrhagic stroke. This stroke is common among individuals in their 20s.

“Children who suffer a stroke often live with the aftereffects for the rest of their lives. Strokes usually impair their learning abilities and motor function, requiring a lifetime of physical, occupational and speech therapy,” Munube said.

To identify factors that predispose children with SCD to having stroke, the researcher used an imaging test, Transcranial Doppler (TCD), to detect factors that affect blood flow in their brains. During the test, sound waves are sent through a patient’s brain and reflect blood flow in one’s vessels. This allows a doctor to interpret the blood speed. The sound waves are then recorded and displayed on a computer screen.

“The test revealed that 70% of the 100 children examined had abnormally high blood speed in the brain which indicated narrowed blood vessels. This puts many of them at a high risk of having a stroke,” he explained.

Prevention and management of stoke in Sickle Cell

A mind-boggling finding from Dr Munube’s research is that a child with SCD is 300 times more likely to have a stroke than a healthy child. Therefore, stroke prediction is an inevitable primary prevention strategy among such children. Regularly undertaking a TCD offers an opportunity for parents to detect whether a child with SCD is at risk of having stroke.

Additionally, parents ought to undertake a sickle cell screening test to establish whether they have the disease or carry the gene.

“Getting screened to know your sickle cell status is extremely important because SCD can be passed down to children through their parents’ genes,” he cautions.

Notably, newborns should also be screened for sickle cell, even if they look healthy. Munube recalled that majority of the parents of children enrolled for the study were oblivious that their children had the disease. According to the US Centre’s for Disease Control (CDC), the reason infants don’t show symptoms at birth is because baby hemoglobin protects the red blood cells from becoming sickle shaped. However, when the infant is around four or five months of age, the baby or fetal hemoglobin is replaced by sickle hemoglobin and the cells begin to sickle.

In terms of medical interventions, children who suffer a stroke must undergo frequent blood transfusion which is necessary to prevent recurrences of stroke. Unless long-term transfusion therapy is provided, 70% to 90% of children who experience a single stroke have subsequent events. However, unreliable supply of blood to the Sickle Cell clinic in Mulago is the biggest challenge to this intervention.

“This is because of the high demand for blood products to treat other conditions such as severe malaria anemia, road traffic accidents and other blood disorders,” reads part of the research.

To manage pain related to the SCD and stroke, patients are given Hydroxyurea, a pain-relieving drug. One capsule of the drug must be taken daily and it costs between UGX 2500-5000 in hospitals and pharmacies.

As a first, Dr Munube’s research elucidates the prevalence of stroke in children with SCD in Uganda. This knowledge will strengthen the need to provide comprehensive care for children with SCD including early identification of children at risk for stroke using TCD screening and the provision of blood transfusion.

Already, the results have led the Department of Pediatrics and Child Health to plan for the introduction of TCD screening at Mulago Hospital.

“We postulate that the introduction of a TCD program in Uganda will prevent 8,000 new stroke cases per year,” he affirmed

The study was supported by the NURTURE Research Training and Mentoring Program for Career Development at Makerere University’s College of Health Sciences (D43TW010132).