by Mubiru Ivan
in National, News
18 0 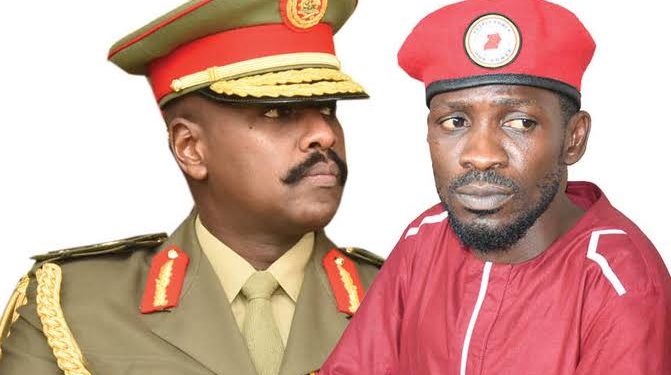 The National Unity Platform (NUP) leader Robert Kyagulanyi famously known as Bobi Wine has criticized the Commander of UPDF Land Forces Lt Gen Muhoozi Kainerugaba for defending veteran journalist Andrew Mwenda who is currently on spot for donning the army uniform when he is not a soldier.

In an online video, Mwenda is seen putting on a military uniform, sitting in the UPDF helicopter, making utterances on the strength of the Ugandan army and threatening to obliterate Allied Democratic Forces (ADF) rebel group.

According to Sec 119 (1) g and h, of the UPDF Act No7/2005, sub sec (g) stipulates that every person, not otherwise subject to military law, who aids or abets a person subject to military law in the commission of a service offence; and (h) every person found in unlawful possession of (i) arms, ammunition or equipment ordinarily being the monopoly of the Defence Forces; or (ii) other classified stores as prescribed, is subject to military law and can be tried in military courts as appropriate. The army has used this article to apprehend NUP supporters who were found wearing red berets.

However, according to Gen Muhoozi, Mwenda’s act is not a big deal.

The senior army officer says Mwenda is part of the massive fan base of UPDF and because of that, they want to wear its uniforms, hold its guns and even pretend to fly its aircrafts.

“My bro Mwenda is part of the massive fan base that UPDF has because of the great work we do. They want to wear our uniforms, hold our guns and even pretend to fly our aircrafts. It means nothing. They are just excited beings. A victorious army like ours is used to such adoration,”the First Son tweeted on Sunday.

Now Bobi Wine says that instead of ensuring that Mwenda faces the law over his unlawful act, Gen Muhoozi is with utmost impunity busy praising his civilian friend for donning the military attire in what he calls adoration of the army.

“Hundreds of our supporters are languishing in prison for over a year. Some have been tortured to permanent deformity. Others have been murdered in cold blood. Their crime? Putting on a red beret which Museveni claimed was military attire,” the former presidential candidate said on Sunday.

He added: “.. Now, this is how Museveni’s son responds to citizens’ demands that his friend Mwenda is held to account for wearing a full military combat in full view of cameras. With utmost impunity, he dismisses the demands and praises his friend for donning the military attire in what he calls adoration of the army! With this tweet, he closes the case. No government entity will dare speak about it again. Muhoozi is simply saying, “I am the state, the state is me.”

Bobi Wine further noted that the fate of all despots who have behaved in such barbaric manner is well known.

“Sadly, none of them ever learns from the fate of those before!I am thankful that they are piling up the evidence of their impunity. Time will tell. The people of Uganda will have the final say.”

On Friday, UPDF said it going to probe Mwenda and the circumstances under which he allegedly possessed and wore army stores.

“I want to believe that Andrew(Mwenda) had prior permission. We must take cognizant of the fact that the law allows a civilian to don a military uniform. Article 160 of the UPDF Act talks about circumstances under which a civilian can put on a military uniform. I want the public to know this provision is there,”the army Spokesperson Brig Flavia Byekwaso said.

“Mwenda was moving with the commander of Operation Shuja(Maj Gen Kayanja Muhanga) where he was going. That makes me believe he was given authority to don that uniform and to that extent he didn’t break the law.If he didn’t have permission to put on the uniform, he committed an offence and if proven guilty is liable to not more than seven and not less than three years’ imprisonment.”