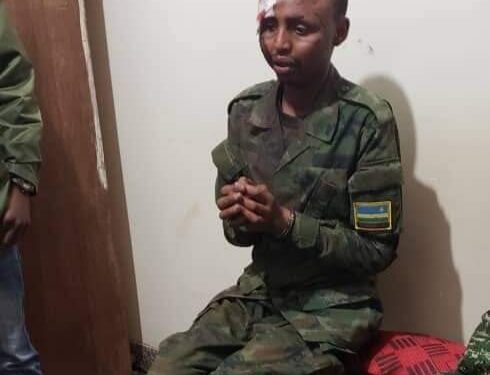 A Rwandan soldier,who was recently captured on Ugandan land in Butanda Subcounty, Kabale district was escaping from the Rwanda Defense Forces.

Pte Ndagizimana 112574 belonging to Alpha Taskforce of 17th Batallion,501 brigade in Nyamucucu barracks in Burera District was days ago captured by Ugandan nationals beaten to pulp until Ugandan security appeared to his rescue.

Eye witness say Rwandan soldiers between 10 to 20 crossed to Uganda running after Ndagizimana, trying to capture him.

However, Ugandans angry at the RDF soldiers used local tools to fight back.

“Rwandan soldiers have been killing our people who attempt to cross to their land. We also know our relationship between the two countries is also bitter. We thought Rwanda was officially invading us,and had to fight back,” One of the elders,who was fighting the RDF soldiers,but preferred the condition of anonymity said.

The soldiers were overpowered by the locals and had to retreat back to Rwanda, leaving pte Ndagizimana in Uganda. Ndagizimana was henceforth arrested,and is still in prison todate.

Clad in his RDF uniform, Ndagizimana also had with him a gun with amunitions.

It’s not yet clear why pte Ndagizimana was escaping from Rwanda,but they’re reports that Rwanda has been recruiting soldiers forcefully.

Rubanda: 3 Rwandan nationals held for illegal entry into Uganda,cry for Mercy not to be returned to their country