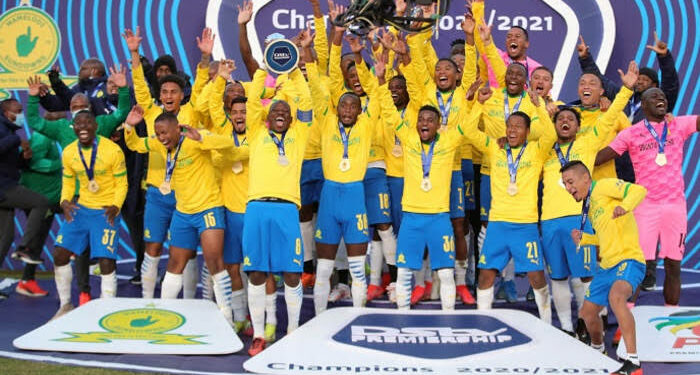 This was revealed on Sunday 19 December, 2021 by Ambrose Tumwesigye Kibuuka at the Memorial Mass of her late mother Annastazia Kabagabe Byebirooha at their home in Ihendatama village, Nyabubare parish Bwambala sub county Rukungiri district.

Kibuuka who has a football academy of over 680 players said that his club will be visited by the South African team where former Uganda cranes skipper Denis Masinde Onyango plays as a goalkeeper.

He revealed that Mamelodi Sundowns have a plan of building a football academy in Uganda and promised to make sure the academy is built in Rukungiri which will help to promote talents.

The football club is based in Mamelodi, Pretoria in the Gauteng province and it plays in the Premier Soccer League, the first tier of South African football league system. Founded in the 1970s, the team plays its home games in the Loftus Versfeld Stadium and Lucas Masterpieces Moripe Stadium.

Meanwhile, Kibuuka who is the Director of Tiger Security Company is remembered for mobilizing thousands of people that gave President Museveni a triumph entry into Rukungiri Municipality during his campaign trail in Kigezi sub region on December 20, 2020.

Political analysts believe that without his support and mobilization skills, there was no way NRM was going to win in Rukungiri. Apart from helping NRM to win many seats in Rukungiri District, Kibuuka also supports students from less privileged families with Scholarships, Bursaries and financial support. He invested over 1.2 billion UGX liquid cash into NRM to uproot FDC from Rukungiri District.

Meanwhile, Kibuuka who is also the Ambassador of the due to be constructed Rukungiri industrial park assured people of Rukungiri that by February 2022, the construction of the park will have started.

President directed the Ministry of Trade  to construct 25 industrial parks in Uganda where Rukungiri district was also earmarked to host one of these parks.

The Rukungiri industrial park will be constructed in Bwambara Sub-county where the district has already handed over 203 acres of land to the Ministry of investment.

Kibuuka said that Bwabara sub-county was lucky to be one of the beneficiaries of 25 industrial parks.

STRIVE MASIYIWA: Two qualities that will always work against you: envy and contempt!