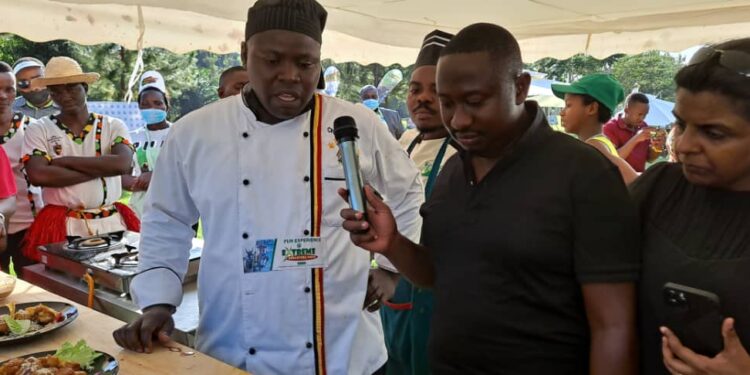 Saturday 18th December 2021 was a big day for Uganda’s culinary industry, the agricultural scientists and tourism enthusiasts too as they all descended down onto the National Crops Resources Research Institute at Namulonge to take part in the first ever Utafiti food festival.

The event that took place at the Namulonge golf course attracted a number of Sponsors including NARO the lead organiser, Uganda Breweries through their Bell Beer Brand, Breathtaking Uganda, Extreme Adventure Park, Roger’s Bites, PRIDE Rice Project  and Cyndrone technologies to mention but a few.

According to NARO’s Deputy Director General in charge of technology promotions Dr. Sadik Kassim, NARO is diversifying it’s strategy to promote uptake and utilisation of the new crop and food varieties it has released through events like this.

“The aim of this event which was headlined by a cooking competition among 5 of the leading celebrity Chefs in the country brought together key stake holders including Chefs, farmers, scientists, food processors among others to understand the value in and share knowledge on how best to utilise the new crop varieties including rice, vegetables and sweet potatoes newly released by NARO.

Busiika Adventure Park’s Head Chef Andrew Alikuluya was the winner of the day and earned himself a weekend gateway for two at Brovad Sands Lodge Kalangala from tourism promoter Breathtaking  Uganda plus other goodies.

While handing over the prize, Breathtaking Uganda CEO Isaiah Rwanyekiro emphasized the importance of local dishes and the new food varieties in the tourism industry given all tourists have food as a top priority when they visit places.

“Agriculture promotion, production and the culinary side of food therefore can together with tourism become the key economic drivers of our economy if properly harnessed. I therefore call upon all stake holders in these categories to work together for greater prosperity” he said.

The first runner up was Chef Emmanuel Gonahasa of Street Light Pizza, second runner up Jolly Katumwine of Latitude 0 Degrees and Chef Mark Kaheru of Just BBQ, Milly Nakahima of Byamilliz Restaurant being the other participants.

The Utafati Food festival will become an annual event going forward with more additions in form of entertainment, activities to be added in over time according to Winniefred Nanteza NARO’s Development Communications Officer.