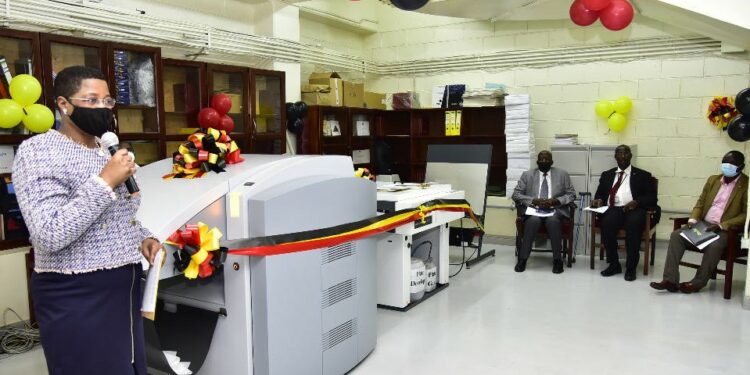 The Deputy Speaker of Parliament, Anita Among, launched the Computer-to-Plate machine.

Parliament’s journey to digitalisation continues, this time, a state-of-the-art Computer-to-Plate (CTP) machine has been launched to enable in-house printing of Parliament publications, including the official report, Hansard.

The colour separation and plate-making machine is the most recent addition to the digital print media machines in the printery.

While commissioning the machine at the Parliamentary Printing Press on Thursday, 16 December 2021, the Deputy Speaker, Anita Among, said Parliament has made remarkable progress towards achieving the goal of digitalisation.

“Before I became an MP, I needed the Hansard report for the benefit of court proceedings but I failed to get them. But currently, one can get the Hansard within an hour,” said Among.

She added that the next step will be holding plenary sessions virtually to enable members participate even while outside of the precincts of Parliament.

“With this kind of transformation, the Parliament of Uganda will be a force to reckon with. We are moving away from analogue,” Among said.

She challenged the staff in the Department of Official Report to work efficiently since they are now well facilitated to perform their duties.

“Once you are efficient in your department, then the whole Parliament will be efficient,” she said.

The Clerk to Parliament, Adolf Mwesige, in his remarks presented by the General Counsel, Pius Biribonwoha, said the CTP machine is a timely development as Parliament moves towards automating all activities of the printing press and producing parliamentary publications in-house.

“In future, with the amendment of the relevant laws, we should be able to print representation copies in-house for the assent of the President,” said Mwesige.

The Deputy Editor of Hansard, Esther Mwambu, explained that the CTP machine will automate the production of printing plates and save time and physical effort required to produce the Hansard monthly bound volumes and other parliamentary publications.

“With this machine, a job we have been doing for a week will be done in six hours with less effort. We shall also be printing two bound volumes of the Hansard in a month as opposed to one volume in a month,” Mwambu said.

Mwambu added that the CTP machine replaces the older machines procured in 1988 which are now obsolete.

The Parliament Printing Press has since 1998 been facilitated by the Parliamentary Commission to procure state-of-the-art printing machines. It was closed for renovation in April 2017 and re-opened in February 2020.