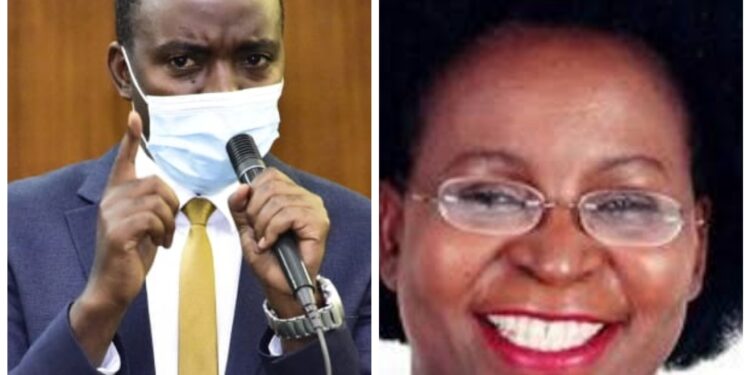 The Deputy Speaker of Parliament, Anita Among has called for an investigation into allegations of misappropriation of Shs31 billion against the Minister for Science, Technology and Innovation, Dr Monica Musenero.

The Deputy Speaker’s directive followed revelations by Ntungamo Municipality MP, Yona Musinguzi that Dr Musenero misused the funds meant for development of Covid-19 vaccines. Musinguzi who tabled a number of documents said the money had been sent through the Presidential Scientific Initiative on Epidemics (PRESIDE).
Among who chaired the sitting of the House on Tuesday, 09 November 2021 said that she would name the members of the select committee to investigate and report to the House.

Musinguzi alleges that Shs31 billion that Parliament appropriated to the ministry for the manufacture of Covid-19 vaccines was channeled PRESIDE, which he says is not a registered organization.

“In its definition it should be a company; it is not registered anywhere but it is receiving big sums of money under the disguise of some scientists who have come together to produce for us a corona virus vaccine,” Musinguzi said.

Musinguzi accuses Musenero for faking payments to scientists who he said deny receiving money from the ministry or Preside.

“On the summary of project disbursements, there is a doctor at Uganda Virus Research Institute whom she [Musenero] purportedly sent shs1.8 billion but the doctor has never seen the money,” he said.

Musinguzi presented a letter where the Auditor General questions how PRESIDE started operating and whether a feasibility study had been conducted to award it the shs31 billion. This Musinguzi says puts the tax payers’ money at risk.

Parliament also learnt of a letter where the Permanent Secretary at the Ministry of Science, Technology and Innovation wrote to Musenero to account for the Shs31 billion. Musinguzi said this raises doubts on the integrity of the minister.

“If I am lying, then why was the Permanent Secretary writing to her to account for the money?” he asked.
He revealed Uganda does not have the required laboratory recommended for the manufacture of vaccines adding that the monies will go to waste.

“I want to assure this House, as a scientist, that research and development of vaccines can only be done in biosafety laboratory at level 4 and that level is only in South Africa on the African continent,” said Musinguzi adding that, ‘the ones on Makerere University and Uganda Virus Research Institute are at level 2’.

Musenero is also accused of employing her relatives in PRESIDE.

“I have information on these officials impersonating as government officials. One of them is Dr. Masanza Michael, the husband to Musenero and the other is Abel Walekwa, who is a niece to the minister,” Musinguzi said.

Attempts by the Chairperson Committee on Science, Technology and Innovation, Remigio Achia to state that the matter was before the committee p proved futile.

Igara West MP, Mbwatekamwa Gaffa asked Among to have inquiries into all presidential initiatives saying all have been mishandled.