We can work with DR Congo to defeat ADF – President Museveni 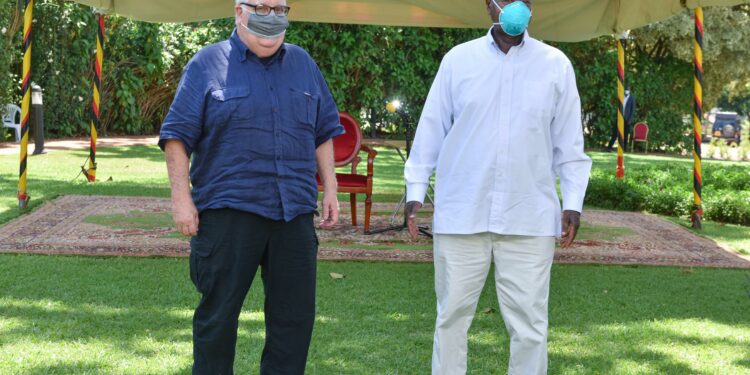 President Yoweri Museveni and Mr. Howard G Buffet son of Warren Buffet pose for a photo after a meeting at the State House Entebbe on 9th November 2021. Photo by PPU/ Tony Rujuta.

STATE HOUSE, ENTEBBE: President Yoweri Museveni has said that Uganda can work with the Democratic Republic of Congo to defeat the ADF terrorists wrecking havoc in the neighbouring country.

The President was today meeting a USA delegation led by Howard G. Buffet the CEO of Buffet Foundation, a philanthropist and conservationist who is also the son of United States billionaire investor Warren Buffett and Shannon Sedgewick Davis the CEO of Bridgeway Foundation, a Philanthropic organization dedicated to ending and preventing mass atrocities around the world at State House Entebbe.

While briefing his guests about the security situation in the region, President Yoweri Museveni said that the peace and security witnessed in Uganda was due to good a good ideology.

“The work that you see in Uganda is due to a correct ideology. We are patriotic because we believe in interests rather than identity. The problem in Somalia for example is both tribal and clan based while the leadership in D.R. Congo has had an ideological vacuum,” he said.

Howard Buffet who said he was here to pay a courtesy call on President Museveni said the President’s Ankole cattle caused “chaos” in Texas!

“People in Texas brag about cattle, they were in awe when they saw your cows,” Buffet who visited President Museveni’s Kisozi ranch in 2019 said.

The CEO of Bridgeway Foundation Ms. Shannon said that they are very grateful for Uganda’s efforts in maintaining peace and security in the region.