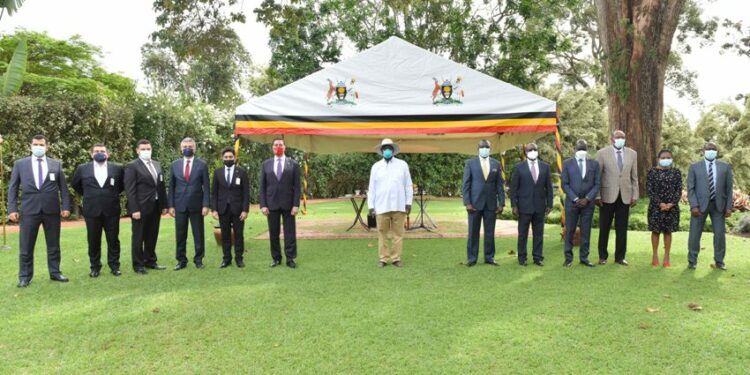 President Yoweri Museveni in a group photo with the Turkish Ambassador to Uganda H. E Kerem Alp after a meeting as they discussed issues about the Turkish construction Companies operating in Uganda, the meeting took place at the State House Entebbe on 26th October 2021. Photo by PPU/Tony Rujuta.

The President was today meeting a Turkish delegation of investors that was led by the Turkish Ambassador to Uganda H.E. Fikret Kerem Alp at State House, Entebbe.

“I am happy to receive you and I want you to bring me more investors. I want you to come and tap into the fruit processing sector and agro-production,” he said.

The delegation gave him an update of roads construction projects that they working on in Uganda.

Uganda and Turkey have a strong commitment to development cooperation in the sectors of Infrastructure, Manufacturing, Education, Tourism and Heath.

The Turkish Ambassador to Uganda, H.E Fikret Kerem Alp said that bilateral trade between the two countries has greatly improved, adding, that the construction sector was the driving force of the Turkish economy. He said that he has brought the top notch in energy and construction.

Amb. Kerem Alp said that they employ 4,000 Ugandans in the ventures that they are involved in and expressed interest in the Turkish construction firms being allocated more roads.