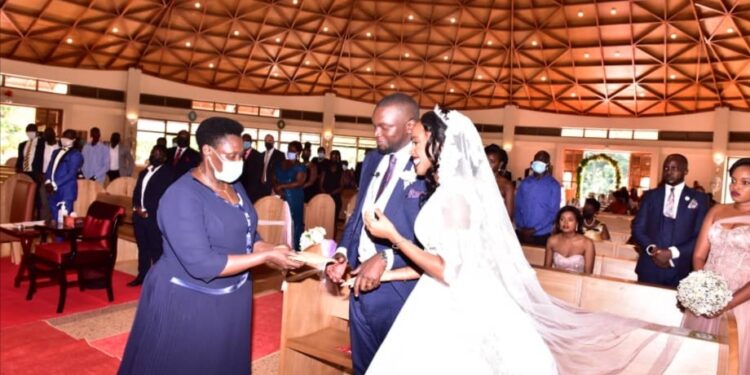 “The family is a very strong pillar in matters of sowing seeds of the church. The groom, having grown in a very deep-rooted way in the church; has helped him to be humble and to grow to this level. This is because, the Muloni family did a good parenting job, and I thank you,” the Vice President noted, “You (Barry) have attracted all of us to this church to witness this wedding, because you were raised well.”

“In the same way, I need to congratulate and thank the parents and the family of the bride, and all those who helped her grow in a strong Christian background. It is because of your great upbringing, that you decided to receive holy matrimony and we are proud of you,” the Vice President added.

She made the remarks yesterday, at Uganda Martyrs Basilica Munyonyo, during the wedding of Muloni’s son; Barry Muloni. The former minister, who is still a Woman Member of Parliament for Bulamburi district, is married to Felix Mulono.

Muloni also thanked the Vice President for gracing the event. “We are so happy that you accepted the invitation, and we do not take your attendance for granted. Thank you for being a great friend. We treasure that as family,” the former minister noted.

The couple later had their reception at Sheraton Hotel, in Kampala.