Ms Alaso Immaculate, Regional  @PoliceUg community Liaison Officer and PRO Bukedi North: “@PoliceUg in Palisa has today foiled a demonstration by locals, against the Arab contractors. The public blocked the contractor from accessing the quarry alleging their contract expired. We peacefully talked to the community and calm has been restored.”

by Lawrence Kazooba
in Business, News
4 0 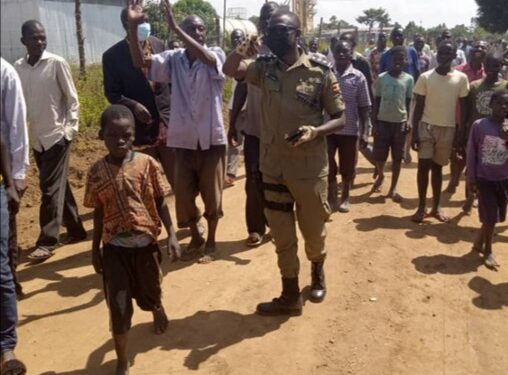 Residents in Pallisa district, in Eastern Uganda, on Saturday held a demonstration to express their dissatisfaction with roads construction firm, Arab Contractors ltd, who have been exploiting their stone quarries without paying fees.

It took Police intervention to contain angry residents who were protesting Arab Contractors’ continued use of their stone quarry after the expiry of their contract.

Police engaged in talks with the demonstrators to abandon protests and give the roads company a chance to raise money to renew the agreement.

“@PoliceUg in Palisa has today foiled a demonstration by locals, against the Arab contractors. The public blocked the contractor from accessing the quarry alleging their contract expired. We peacefully talked to the community and calm has been restored.”

Arab Contractors are building a US $74 million Tirinyi-Pallisa-Kumi and Pallisa-Kamonkoli roads in Eastern Uganda and need stone material to complete the projects.

However, the agreement to use quarries expired before completing roads. The construction firm, however, continued harvesting stones from quarries which raised the concerns. The decision to use the quarry was reached between the contractor and locals together with their leaders.

The 111km long is being upgraded from murram to tarmac and funded by the African Development Bank (AfDB) in collaboration with the government of Uganda was expected to take five years, but could take longer.

Arab Contractors had committed to finishing the project on time through the general manager, Mr. Salah Radwan, in past interviews.

It comes as a surprise that communities could rise up to protest over non-payment when the company vowed to put in place stringent measures to ensure the project is completed on time and without dramatic obstructions.

Uganda National Roads Authority’s communications manager Mr Stephen Kirenga, explained that the contractor is in fresh negotiations to extend the agreement to use the quarry.

“The original agreement for the quarry that produced the materials that constructed the main road which is nearly completed, expired last month.

Mr Kirenga added however that, “The contractor is now in fresh negotiations for extension of the agreement for use of the quarry for the construction of the town roads.”

UNRA explained that to avoid stalling the process of constructing town roads, the contractor continued to access the quarry as the new negotiations are ongoing.

“We have put up stringent measures to curtail theft of fuel and site construction tools. All vehicles on site have been fitted with trackers to keep tabs on their locations. We do not entertain stealing of fuel, this is sabotaging the project and whoever is involved with such actions will be penalized,” said Mr. Radwan said early this year.

This road is expected to boost businesses in Eastern Uganda, linking eastern Uganda without different parts of the country.