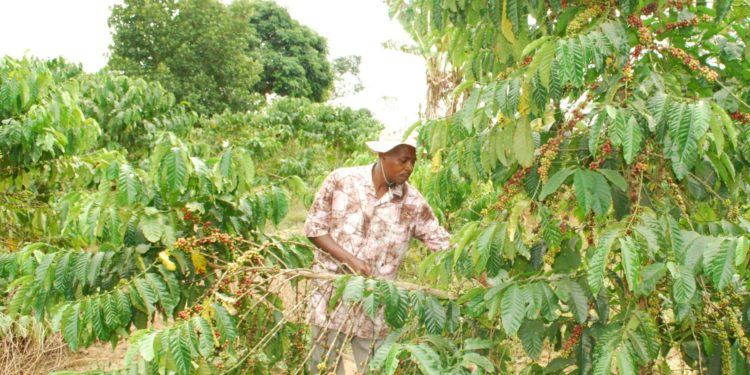 Fully clad in a kitenge shirt, a brown hat, and black gumboots, Gonzaga Mayanja smiles off to the camera as he takes a seat.

He has been a bit preoccupied by farming duties and now settles to oversee the GreenVille Country resort beach also his side business.

In 2008, land in distant areas of Masaka was readily available and cheap but very few had the knowledge of gazetting it. As a planner and eloquent man, Mayanja was forced to save from his meagre
pocket money and managed to purchase a piece of it.

Like any risk taker, the 47 year entrepreneur began by getting 10 acres of land at Lubumba village, Kyanamukaaka sub county, Masaka District.

He then started his farming voyage and reared 20 cows which he bought from village residents. The farm started blossoming and per now, he rears more than 50 cows.

Yasin Lubega is his farm manager. Mayanja shares that he regularly caters for the well-being of the farm business as he lets other work to Lubega.

Mayanja articulates that when he secured animal farm, he again thought of starting
up coffee plantation to utilize resources such as manure which was regularly available from animal wastes.

“Having a bull in cattle farm has worked miracles for me. Every year the cows produce as many calves and this
helps me get enough manure from them,” Mayanja says.

As a starter in rearing animals; he first reared Ankole Long horned cattle and a Boran bull which the Kenyan ranchers developed from Boran cattle of the Borana people of southern Ethiopia.

The farm started distributing plenty of milk and butcher men from all walks of life started booking cows for meat until now.

However, recently he was advised by a friend who is also a farmer to
buy Sahiwal bull which he bought in Sembabule District to replace the Boran bull. It’s a reddish brown bull in color, with a big hump.

According to Mayanja, Sahiwal bull is tick-resistant, heat-tolerant and notes that
it is also high resistant to parasites, both internal and external, thus making it admirable in cattle farming.

“Sahiwal bull is of a good tender meat, good breed and its dual purpose cattle. You can get both quality milk and meat,” he noted.

In 2012, when the government of Uganda sensitized people to utilize agricultural schemes such as the National Agricultural Advisory Services (NAADS) program, as a civil servant he never looked back. He obtained 4500 free coffee plants through NAADS program which helped him expand his plantation now calculating 50 acres of coffee plantation.

“I was getting manure regularly from animals. I saw another opportunity of getting coffee from NAADS and from there, I started it out,” Mayanja, astonishingly noted.

He adds that he also tried to get other coffee from Kaweeri coffee farm, Mubende District. All the process of clearing the land, plus other labor costs incurred him shs.5m at the beginning.

On his farm, he grows corona coffee and ‘Elite’ and every coffee plant is massed with manure.

In a coffee plantation, Mayanja has placed heaps of maize stalks that
act as a source of moisture and also reducing the risk of soil
erosion. He also excavated different trenches which helps keep enough water in the soil.

Since corona coffee takes three years to its harvesting, he says in 2015 he was able to gather the fruits of his efforts after collecting 100 bags of packed coffee.

He sells each bag of coffee at Shs. 170000 although seasons keep on changing.

“In my first harvest I got Shs1. 7 million. It was little money but I kept on moving. I’ve since then invested and hope to invest more in Agriculture,” shared a soft-spoken Mayanja.

He is not only into cattle rearing and coffee farming; he also rears goats in a well-constructed cage that was constructed in October, last year. The cage is roofed with iron sheets and it holds enough space ‘Ekizanyiro’ which gives the goats’ ample space.

Inside it, there lays black basins that acts as feed troughs for water to the goats. He could cut twigs of mango trees to feed them and the goats are tethered in a farm during the day and protected in a cage at night.

Although it may make the best use of limited land resources and offers enough protection to animals, this scheme of constructing a cage increases labour and the capital investment required for such facility.

“I sealed its floor using bricks and concrete. Early in the morning, they
clean it, collect manure and transfer it to the gardens,” says Mayanja, who holds Master’s Degree in Project planning
and management which he attained from Makerere University.

He adds that unlike growing coffee and rearing cows, the goats gives
him no hardship since they can be fed indoor or grazed outside the
farm.

According to him, the cage can accommodate over 200 goats and having 20 goats in it now, it’s a strong start to him as he recounts.

“I bought each goat at Shs. 200,000 from neighboring farmers. They have produced and I hope to add in other breeds.”

Among the goats he rears on his farm include, Mubende goats, Kigezi breed, and extra.

Much as he puts more of his focus on coffee plantation, he also has 50 acres of eucalyptus trees planted, few meters from the main farm store enclosed with a barbed wire fence.

He also grows other fruits on a small scale such as pineapple, oranges, watermelon and marginal beans since he has only 15 workers on
the farm.

“We have tried to invest our money by buying plots of land. I think this will help us pull our desired goal of commercial farming into a definite plan.” she softly shares in her office at Greenville Country Resort Beach.

Away from farming, Mayanja erected GreenVille Country resort Beach which today attracts all and sundry from Uganda.

“Business is business. Covid greatly affected our plans both for the farm and the beach GreenVille but slowly we’re moving,” shared Mayanja as he takes evening tea at the resort.

“The county has changed. Youths have fallacy of talking about politics from morning leaving other developmental ideas and people that can grew their mindset aside. It’s high time we work hard.” concludes Mayanja.