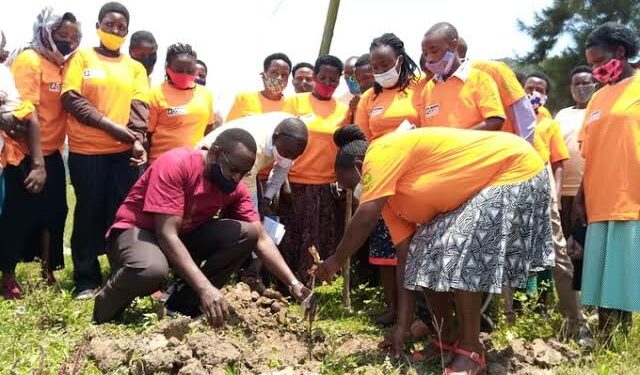 Local Sustainable Communities Organization- LOSCO has launched a campaign to plant 10,000 fruit trees in Kabale District as a contribution to mitigating effects of climate change in the area.

The Executive Director of the organization Albert Taremwa explained that they partnered with OXFAM International to plant trees in Kabale district as one way of contributing efforts to measures being put in place to control mudslides and floods that usually affect agriculture and settlement in the hilly areas.

The tree planting campaign was launched on Saturday at Kyanamira Subcounty headquarters where the first tree was planted.

Mr. Taremwa said that the fruit trees including Mango, Avocado, and Guava seedlings among others would be donated to communities living in the hilly areas to be planted on steep slopes where they can firmly hold soils to prevent erosion and mudslides during the rainy season.

The Kyanamira Subcounty Chief Zelda Lindabo thanked LOSCO for considering her area as the first beneficiary. Ms Lindabo explained that Kyanamira Subcounty was prone to mudslides especially during the period between March to May and August to December every year.

Rachel Busingye, project coordinator at LOSCO asked the locals to conserve the environment by planting more trees and endeavor to replace each tree that is cut, to avoid effects of heavy rains on the soils.

According to the 2021 National Risk and Vulnerability Atlas of Uganda a booklet that locates areas that are prone to disasters in the country, South Western Uganda especially Kanungu, Kabale and Rubanda are listed among districts prone to mudslides, flooding and lightning.